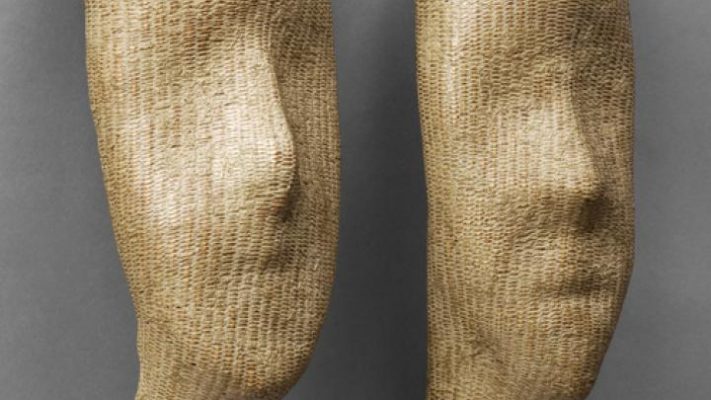 Venture into the World of Bamboo Sculpture

One glimpse of Kawana Tetsunori’s split-bamboo installation, Enclosure, majestically standing in a pond on an island in The Japan Society’s modernist lobby, leads you to believe that this is the beginning of an extraordinary presentation. It’s hard to imagine that anyone would be disappointed.

Joe Earle, the Society’s gallery director, curated the first exhibition inside or outside Japan devoted entirely to bamboo as a material for sculptural works of art. The 23 featured artists in the show draw on centuries-old methods of basket-making as they push bamboo’s traditional boundaries, creating a cornucopia of original sculpture. The simplicity of many of the objects at first glance belies their complexity and refinement as each piece requires incredible technical virtuosity, scrupulous attention to detail and immense amounts of creativity.

According to Earle, the enormous process of preparing the bamboo can take more time than the actual construction of a piece. Many artists take on this process themselves and some are even involved with the cultivation of the material. When engaged in a piece, Earle says that Uematsu Chikuyu, for instance, who confines his productivity to one large piece every year, works entirely in seclusion, refusing to see anyone during the making of a piece, as Earle himself discovered.

All of the artists in the exhibition are Japanese, with one exception. Stephen Talasnik, a New York-based sculptor, created a series of intricate structures illuminating Western architectural and engineering principles that Earle calls “at once precise and mysterious.” They harmoniously neighbor Kawana’s grand, organic construction beyond the gallery walls.

Upstairs, where the remaining 86 sculptures are displayed, it’s hard not to feel a deep reverence for the sheer genius and dedication behind the work. Matsumoto Hafu’s flower basket fashioned from ten-foot lengths of pale timber bamboo greets visitors with a dramatic hello as the show divides into four sections-Vessel to Sculpture, Regional Masters, Individual Voices and New Directions. Somewhat defying the non-functional premise of the show, the basket has a removable copper water container and on the day I visited a lovely flower arrangement reached high and wide. Illustrating bamboo’s versatility, the arrangement will only be on display during the opening days of the exhibition, then removed to present the piece purely as sculpture.

The transition from container to sculpture is further explored with curved, expressive sculptures by Honma Kazuaki, who still continues to weave flower baskets, and his son Honma Hideaki, who employs unusually complex weaves and a wide range of different bamboos. Kazuaki has developed a very hard smoking technique which in the hands of a less practiced artist can burn the bamboo. Both use bands of rattan, an extremely important tool to tie the strands together, as do many of the other artists in the exhibition. Several use lacquer and dyes for color variation while Ueno Masao, a former architect and one of the younger artists in the show, combines the simplest tools with advanced computer-design software, all this after he grows, harvests, seasons, treats and splits the bamboo himself.

Shono Tokuzo, son of a Living National Treasure, Shono Shounsai, the first bamboo artist to attain that honor, abandoned his father’s teaching that the finishing of the mouth was the most important feature of a bamboo work in his flexible piece titled Illusion, allowing vertical strands to float freely.

Morigami Jin may very well be the Henry Moore of the bamboo world with his smooth, anthropomorphic forms that have no edge, no mouth, no beginning and no end. Woven in three dimensions at once, as the work proceeds the pattern shifts, resulting in openings with five or seven sides.

Most works in the show are owned by Americans, including Lloyd Cotsen, whose collections of both Japanese and American baskets are among the most important in existence. Set alongside the kinetic energy of Yako Hodo’s Skyscrappers, the spherical My UFO, a piece from the Cotsen Collection, exudes tranquility and offers a vigorous juxtaposition.

In comparison to the perfection of other pieces, Ikeda Iwao’s Destruction and Creation is a radical departure. Raised in a basket-weaving family, Ikeda studied lacquering at Tokyo National University of Arts where he was shown lots of lacquer ware by famous early-twentieth-century artists. While he was amazed by their meticulous workmanship he was never moved by them. Following years of crafting lacquer boxes for tea ceremonies, Ikeda began experimenting with personal expression and today comments on notions of technical prowess by smashing his works. His objects are neither vessels nor sculptures but could be a bold, contemporary version of the tea aesthetic with its stress on the rough and imperfect.

Oki Toshi, one of two women artists in the show (the other being Tanabe Mitsuko), was the last pupil of Iizuka Shokansai, who became more involved with Toshi’s development than was usually the case in the traditional master-pupil relationship, actively instructing her for long periods of time. The interplay between exterior and interior in Oki’s Outburst, styled with strips of unplaited bamboo contrasted with rows of knotted rattan, dramatically suggest her struggle to evolve from basket-maker to sculptor.

Recent bamboo sculptures by another fascinating artist in New Bamboo, Nagakura Kenichi, can also be seen from October 4 through November 3 at the Susan Sheehan Gallery located at 535 West 22 Street in Manhattan. According to Amber Jordan, associate director at Tai Gallery in Santa Fe, which represents Nagakura, the defining characteristic of Nagakura is his independence, a rarity within the Japanese bamboo arts where participation in various craft art associations is the norm. Jordan describes Nagakura as “very dynamic, very unexpected,” having no self or culturally imposed boundaries on how he creates his work. He steps outside traditional limitations, mixing in materials beyond the customary bamboo and rattan, although Jordan says the mysterious Nagakura will not reveal his secrets to her. Yet while the enigmatic artist’s organic work appears to be sculptural, as with the work of other ‘post-basket’ artists, it still gives a nod to tradition.

Whether the sculpture on view is ethereal, bold, serene or dirt-encrusted, the intermingling of dramatic lighting with the organic nature of a material bathed in sun, earth, air and water generates a feeling of equanimity and certainly provides a much needed interlude from the hectic and lately, calamitous filled streets of New York. And if pure enjoyment is not enough, keep in mind that the act of crafting exciting, beautiful forms with bamboo is also a celebration of sustainability.