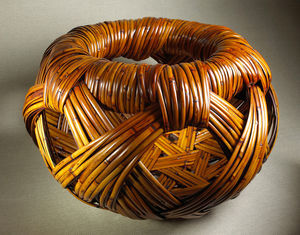 At BAM, bamboo works that are anything but traditional

“Spring Tide,” a basket of bamboo and lacquer, by Fujinuma Noboru.

What comes to mind with bamboo? Groves of tall, graceful, shushing, clonking stems? Eco-friendly building material? If you’re into art, you might think of delicate paintings of bamboo or meticulously plaited baskets.

As one of Japan’s most abundant natural resources, bamboo has been a popular material and subject for centuries, although the training and expertise involved has limited its practitioners. Today, according to some accounts, there are fewer than 100 professional bamboo artists.

In the hands of the 17 artists in “Modern Twist: Contemporary Japanese Bamboo Art,” on view at Bellevue Arts Museum, the grass becomes embedded in clay, nailed to a wall, or twisted and steamed and manipulated into a range of forms that break the boundaries of tradition.

It’s best to keep traditional bamboo basketry in mind if you visit “Modern Twist,” in order to appreciate how radical these forms are. My criticism of the show is that it presupposes a familiarity with the ideal against which these artists react. It would have been nice to have a small introductory display with examples of conventional basket forms — maybe in different stages of development as they’re typically woven from the bottom up.

Tradition is an enormously important backdrop for these artists. The apprenticeship and training system follows strict protocols and can take years; according to some experts, 10 years can be spent just learning the basic techniques of cutting, dying and plaiting.

To get some sense of the history and conventions of bamboo art, I suggest starting with the gallery to your left as you come up the stairs from the lobby. It’s filled with bamboo pieces that more directly refer to the traditional uses of bamboo art — as containers made for tea ceremonies or flower arranging. But even here, it becomes clear that the artists are taking liberties. Some play with technique, weaving from the top down, for example. Some play with form, plaiting their functional vase structures into evocative forms.

My favorite is “Warrior” by Tanabe Shochiku III, who has created a functional flower basket in the shape of the top portion of a samurai’s suit of armor. The container for holding flowers is right in the neck hole, supplanting the mighty warrior’s head. The ideas of tradition and lineage resonate for Tanabe. He comes from a long line of bamboo artists and is the son of the well-respected artist Tanabe Chikuunasai III, whose work is also in the exhibition.

In other galleries, artists leave function and tradition even further behind. At about 4 feet high, “Circle” by Nagakura Ken’ichi is a massive presence. Nagakura first created a basket, then sluiced clay over it and wiped down areas to reveal strips of shiny bamboo. These shards radiate inward toward the void of the circle, creating the impression of movement and contradicting the density of the piece.

It’s as if the standard cylindrical basket form has been upended, punched through, and petrified, both distorting and preserving history, while creating possibilities of expression. And there’s still a nod to functionality with a small vase, barely visible, embedded in the center.

Works by Uematsu Chikuyu are overtly sculptural. His wall-hanging works — a rare form for bamboo art — are large-scale and nonfunctional (except, of course, as they function as works of art). But, even here, the structures could be seen as more abstracted containers of tradition. Uematsu fills his work with symbolic references to common Japanese artistic motifs: enlightenment, nature, music, patterns.

Curated by Andreas Marks, of the Clark Center for Japanese Art and Culture (in Hanford, Calif.), “Modern Twist” is one of several exhibitions and books of the last decade that establish bamboo art as a prestigious contemporary art form. Two artists in the exhibition, Katsushiro Soho and Fujinuma Noboru, have been named Living National Treasures by the Japanese government.

The show also reflects well on BAM’s continuing, thoughtful practice of curating or selecting art, craft, and design exhibitions that allow us to reflect on the fluid intersections of art and craft, form and function, and tradition and innovation. Or we can simply be duly impressed by marvelous objects made with remarkable skill.