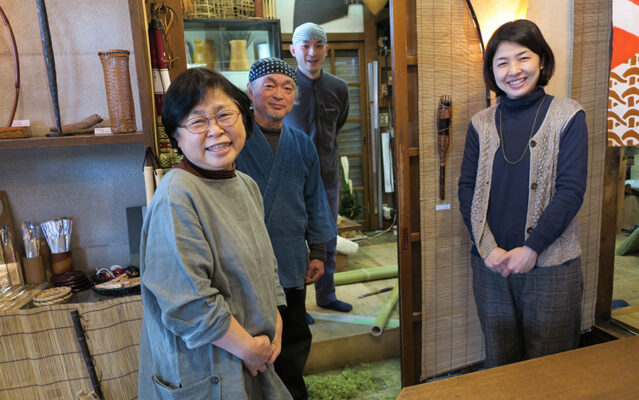 Out of the 38 living bamboo artists TAI Modern represents, 20 use artist names.

Some of these artists received their names from the teachers with whom they learned the art. Artist names given by masters recognize the artistic talents of the student and are indicative of artistic lineages. In this instance, a master often includes part of his own artist name in the student’s new name.

You may have noticed that many bamboo artists’ names end in sai (斎), such as Hayakawa Shokosai, Shono Shounsai, Tanabe Chikuunsai, and so on. This suffix roughly translates to “seeker,” as in “one who seeks the ideal in the art form he/she chooses.” The origin of this word goes back hundreds of years. The original meaning of the word was “serving beside the goddess Amaterasu.” Sai-gu was used initially to refer to a female shaman or shrine maiden, and later, to refer to a person who purified themself and sought to serve the gods.

Bamboo artists may also use Dharma names given during a Buddhist initiation ritual to newly ordained monks, nuns, and laity. For example, Shono Shounsai, the first Living National Treasure in bamboo art, began his career using the name Mujakusai Raku-un. In 1932, he was given the Dharma name Shounsai Taizan by the head priest of the Myoshinji Temple. After that, the artist used Shounsai as his artist name. This reflected perfectly Shono’s artistic philosophy that art-making was his way of practicing Zen.

And finally, artists may also acquire names inadvertently, through chance or, in the case of Kawano Shoko, the mechanics of the market. The Oita-based dealer who first sold Kawano’s baskets thought that they would sell better if he had an important sounding artist name. Shono Shounsai (生野祥雲斎) and Kadota Niko (門田二篁) are two famous bamboo artists in Oita. The dealer created Shoko by combining Sho (from Shounsai) and Ko (from Niko). What could be a better sounding artist name! Kawano, even after becoming an established artist, kept this name. He says, “I get really embarrassed every time someone calls me by this name. I thought of changing it, but I didn’t. Why? This name is a constant reminder to me. I have to aim high,
and someday, I will become an artist worthy of my name.”