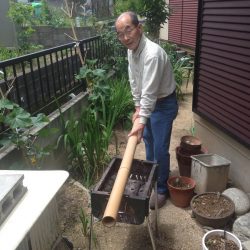 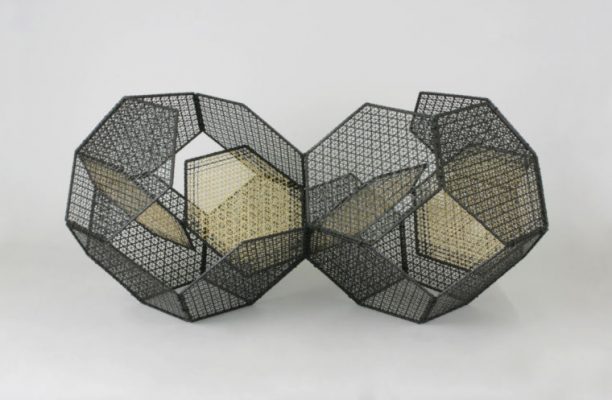 Fukunishi Ryosei: Spring Frangrance in the Air, 2011, madake and rattan

Ceramics, calligraphy, and woodblock printing — all of them among the traditional arts of Japan — have been passed down from generation to generation for centuries. But out of these traditions have emerged a number of contemporary artists whose work is innovative and unique, transforming older art forms from the inside out. The same has occurred with Japanese bamboo basketry.

Emerging Bamboo, an exhibition of basketry and sculptural forms on view at TAI Gallery, presents a selection of work by up-and-coming Japanese artists who are redefining the parameters of the difficult medium of bamboo. The work ranges from exquisite vessel shapes and functional baskets to purely aesthetic forms. It is expressive, elegant, and sophisticated in design. The versatility of bamboo is readily seen in the variety of work on display.

For centuries, the Japanese have used bamboo to make vessels, buildings, furniture, and a host of everyday objects. Even today, the art of traditional bamboo basket making is passed down from senior basket makers to younger artisans, often within the same family. Although hundreds of varieties of bamboo exist, only a handful, including madake, nemagari, and susudake, are used in basketry. The choice of bamboo depends on a number of factors, including color, texture, and pliability.

Most of the artists in Emerging Bamboo work with madake. Fukunishi Ryosei, Shirabe Kimiko, Ebana Misaki, and others craft vessels using thin strips of madake bamboo bound with rattan. Ryosei’s Spring Fragrance in the Air, a bowl form with a woven geometric design at its center, reminiscent of a mandala, took months of patience and skill at plaiting to complete. The result is a work of arresting beauty.

Yufu Hiroshi’s work stands out from that of Misaki, Ryosei, and other more traditional basket makers because it has a rougher appearance. It is made with wide strips of madake that have been given a dark stain. Hiroshi’s baskets are often accentuated by stout sections of bamboo stalk that contrast with the thinner woven strips. Overall, his work has a raw aesthetic that emphasizes the beauty of the natural, unrefined material, perhaps expressing the Japanese philosophy and aesthetic principle of wabi-sabi, an ideal of imperfect beauty often expressed through the traditional arts.

The most sculptural of the pieces on exhibit, Nakamura Tomonori’s Diffused Mood Light and Sprite, are two-toned, intricate geometric designs. Dark outer shells composed of a series of flat, hexagonal pieces surround unstained hexagonal shapes in the interior. Because Tomonori does not make a tight weave, the lighter interiors show through the darker shells. He also plays with negative space, leaving sections open to allow viewers to peer inside. The symmetry of interiors and exteriors forms an engaging interplay.

Several artists combine natural bamboo fiber with stained strips of bamboo to achieve decorative motifs and patterns. Ryosei alternates light and dark bands of color in his vessel form Glimmering Snow, for instance, as he does with a similar piece called Gentle Waves. Similarly, Kizaki Kazutoshi sticks to a basic vessel shape with his diaphanous, fragile-looking Seed of Memory, but he leaves the natural bamboo color.

Misaki’s Lotus Flower is a complex dodecagon-shaped basket with a soft gold-toned stain that subtly fades as the piece expands outward toward its rim. Another basket by Ryosei, Forever Happiness, bulges out midway up its body, where a single piece of bamboo runs around its circumference, its decagon shape achieved through heating and bending the material.

Most bamboo artists weave from the bottom up. Some combine more than one plaiting technique to add intricacy and complexity to their designs. Traditionally, Japanese bamboo work was left unsigned. In the 19th century, Hayakawa Shokosai I, who was instrumental in elevating bamboo basketry to a fine art form, began to sign his work. Other artisans followed suit. Modern Japanese bamboo artists sign their work by etching their names into the material. (Shokosai’s descendent Hayakawa Shokosai V, a Living National Treasure of Japan, is represented by TAI Gallery.)

According to the gallery’s website, fewer than 100 bamboo artists are active in Japan. Learning the craft demands a high level of commitment and a lot of time. It can take years of perfecting basic techniques before artisans begin concentrating on their artistic talents. Most don’t become master craftsmen until they reach their 50s or 60s. The artists in Emerging Bamboo represent the future of bamboo fiber arts in Japan. TAI Gallery already represents more than 30 Japanese bamboo artists and will most likely begin to represent those in the exhibit as well, providing viewers with an overview of the best the art form has to offer.

Japanese Bamboo & the World Expo: A Century of Discovery

In honor of the 1915 Panama-California Exposition centennial celebration, TAI Modern is thrilled to present an expansive group exhibition at the Japanese Friendship Garden of San Diego, San Diego, CA, September 12 – December 6, 2015.The show will include over forty bamboo artworks created by a variety of artists. This special preview exhibition on view at TAI Modern highlights several historic works, some on view for the first time.

The 1915 Panama-California Exposition—which celebrated the opening of the Panama Canal and sought to establish San Diego as a port of call—was the site of a major early exhibition of Japanese arts and culture, including bamboo art, in the United States. Beginning in the late 19thCentury, Japan’s participation in the world’s fairs initiated some of the earliest encounters with Japan’s art and culture within Europe and the Unites States, resulting in an enormous demand for their unique products.

Japanese Bamboo and the World Expo: A Century of Discovery celebrates the fairs’ roles as critical moments of international exposure that inspired Japanese bamboo artists to further their crafts. With pieces spanning from an 1887 vessel by Hayakawa Shokosai I to Nakatomi Hajime’s 2015 Prism: Square, the exhibition provides a rich introduction to the diverse developments bamboo arts have undergone throughout the last century. The show is organized around three primary regions of bamboo art: Kansai, centered around the historic cities of Kyoto and Osaka; Kanto,which encompasses the Tokyo metropolis and the urbanized center of Japan; and Kyushu,the southernmost of Japan’s main islands.

The birthplace of modern Japanese bamboo, the Kansai aesthetic is characterized by elegant forms, balanced proportions, refined craftsmanship and elaborate detail. Kyoto, the historic capital of Japan for over a millennia—also the birthplace of the sencha tea ceremony—was traditionally home to members of the nobility, whose refined tastes and high culture influenced bamboo artists. Three pieces from the Hayakawa Shokosai lineage, spanning almost a century, exemplify the region’s graceful shapes,intricate rattan work, rich dyes, and harmonious integration of various weaving techniques. In later works, such as Tanabe Chikuunsai II’s Lily-shaped Flower Basket, all of these traits are retained while artists have shifted toward lighter constructions and airy, open weaves.

The Kanto region, centered around the Tokyo metropolis, is home to artists known for their innovation and break with tradition. From a broad range of colors and types of bamboo to inventive, asymmetrical shapes, these artists share an impulse for experimentation. This is evident in Isohi Setsuko’s cherry-red dyes and Honma Kazuaki’s use of shakotandake, a unique type of speckled bamboo grass. Oki Toshie’s geometric Spring Breezeand Honma Hideaki’s abstracted sculptures exemplify ongoing explorations within bamboo’s potential for new techniques and forms.

Kyushu, the youngest of the three regions (bamboo art began in this region in the early 1900s), is currently home to the largest number of practicing bamboo artists due to the establishment of the Oita Prefectural Bamboo Craft and Training Support Center in the city of Beppu. Influenced by a number of teachers from various regions, the Kyushu artists are known for powerful constructions and robust, jar-shaped curvatures.Interest in dynamic horizontal progression can be seen in pieces such as Honda Syoryu’s Sound of Wavesand Okazaki Chikuhosai’s Flower Basket with Arrow Design. Many of these artist’s styles embrace bamboo’s wooden qualities, often using wider strips of material and dyes in a natural palette; this is seen in Yufu Shohaku’s muscular Sacred Mountainand Iwao Honan I’s Blue Ocean plaited Flower Basket. 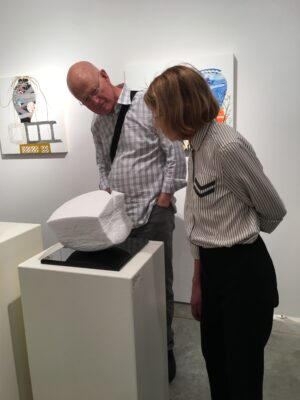