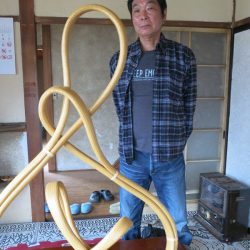 Honda Syoryu was born in 1951 in Kagoshima, on the southwestern tip of Kyushu Island. His family made functional bamboo products. Helping out with the family business as a child is the start of Honda’s working with bamboo. In 1977, Honda moved to the town of Beppu to attend the bamboo craft training school. After completing the one-year course, he remained in Beppu to study under Kadota Niko, a nationally recognized artist. As the largest center for the bamboo craft in Japan, Beppu offered Honda the chance to measure his talent against many of Japan’s most highly-skilled craftsmen and artists.

After becoming independent, Honda began to show original work at local and regional public competitions and was soon exhibiting at the national level in the prestigious Japan Traditional Craft Arts Exhibitions. It was apparent from the beginning that Honda intended to introduce different sensibilities into the Beppu basketry tradition. He often incorporated techniques and styles from other regions to make his vessels stand out. Though there were few collectors in Japan for his major exhibition pieces, Honda became successful designing simple yet elegant flower baskets for daily use. Together with Morigami Jin, an artistic rival and friend, Honda soon became one of the emerging stars of Beppu’s art scene. He taught or mentored a number of young bamboo artists who were drawn to his impeccable technique and contemporary aesthetic, including Kibe Seiho and Nakatomi Hajime.

Sales slowed after Japan’s bubble economy burst, and by the end of the 1990s, Honda was struggling financially. In 1999, Honda was introduced to Robert Coffland of TAI Gallery. Recognizing Honda’s talent, Coffland asked Lloyd Cotsen, a longtime supporter of the bamboo arts, if he would sponsor Honda’s creation of a major piece for the Japan Traditional Craft Arts Exhibition. Honda made a dazzling presentation tray, which the judges rejected, but the work found a home in Cotsen’s collection. The following year, Coffland himself sponsored Honda. Judges once again rejected Honda’s highly original submission. Disappointed that the judges did not value Honda’s creativity, Coffland sponsored Honda again – this time to create a work that ignored the constraints of Traditional Craft Art Association. Coffland wrote “What emerged was a bamboo sculpture entitled Dance that was the starting point of a brilliant series that continues to evolve to this day.” It was a major turning point of Honda’s artistic career. He devoted himself to creating abstract bamboo sculptures, and his new work was embraced by an enthusiastic American audience.

I create sculptures about space and time, about the magnificence and mystery of the universe. Six years ago, I moved to the city of Matsumoto, where the sky and mountains spread out before my eyes. I am becoming more and more inspired by the beauty of this area.

Working with bamboo, it is almost impossible to have total control over the form that you intend to make. When I make my art, I am in constant dialogue with the bamboo. This material’s unique pliability allows me to draw beautiful, naturally curving lines in space. The textures I create cannot be achieved with any other medium. I feel great satisfaction when working together with the bamboo leads me to create a sculpture beyond my imagination.

Collectors in the U.S. have almost single-handedly supported my artistic career. I am so grateful to them. It is my hope to create many more works which will inspire the viewer. I also hope to devote my time to training the next generation of bamboo artists. Keeping the art form alive and passing it on to future generations is the best way for me to honor all the support I have been given.