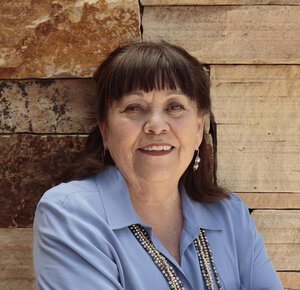 Women Artists of the Southwest

Understanding the value of museum spaces, specifically for the people who use them, is of vital importance to artist and designer Ramona Sakiestewa. The artist has extensive experience in architectural design (a discipline responsible for the parts of architecture that are not the building, but are contained by it), specifically for cultural institutions. Her projects range from the National Museum of the American Indian on the National Mall, as well as the First Americans Museum in Oklahoma City, to the Tempe Performing Arts Center in Arizona. While Sakiestewa also works as a textile artist, printmaker, and painter, she says she particularly loves the “architectural work because you can work in a lot of mediums and at a bigger scale.” In some ways, it’s the place where her diverse skills meet.

There’s so much critique of the capital-M Museum these days that one might wonder why there are new ones being established every year. In light of recent uproar over museums’ poor representation of their increasingly diverse audiences, how does Sakiestewa avoid repeating the mistakes of past institutions to ensure the spaces she helps build honor those for whom they are created? Well, first of all, “you have to do a lot of interviewing,” she says. “I feel like I do my best work when I know the least about something,” as an open mind is essential to hearing what those whom she interviews value most. An inability to understand the people you are working with can end up in chaos, as the artist learned on her visit to Erbil, Iraq, where she was working to create a (not yet extant) government building. “People [in Iraq] are very tribally based,” the artist explains, “so suddenly I understood why Americans had failed in that country because we were busy trying to sell them on democracy… They default to their own tribal constraints.”

The project to create the Chickasaw Cultural Center for the Chickasaw Nation, whose lands stretch across much of central Oklahoma, bore some striking similarities to the Iraq project. In addition to their tribal associations, both groups have “lost a lot of their own cultural patrimony,” notably at the hands of the same people—the American government. Within that context, Sakiestewa’s project was to create a dynamic institution in which both past and present could coexist. (The artist herself is not of the Chickasaw Nation, but rather of Hopi descent.)

But how to build it? In effect, Sakiestewa was tasked with making the anti-museum, a concept whose origins might be found in the Western Museum—which takes the contents of the (dominated, colonized) world and brings it home—and turns it on its head. The Cultural Center is a place for its members not to find the world, but to find home, as so much of their cultural heritage has been purged from their lives. Instead of walking in and seeing unfamiliar objects from a foreign land, tribal members are meant to recognize their surroundings and feel strengthened by them.

I by no means want to suggest it is not a space of discovery, however. An extensive library includes a comprehensive archive on the tribe’s own history, and a gallery for contemporary art is included on the grounds. But neither is it a place exclusively of history—potlucks and other events are frequently held (in non-pandemic times), so that the tribe’s story can continue to be written, shared, and collectively built upon.

In many of her projects, Sakiestewa uses architecture as a way of celebrating Native achievement on a grand scale. The Smithsonian’s National Museum of the American Indian is itself a testament to Native advancements in astronomy. An installation by the artist Charles Ross, which illuminates the building’s lobby every year on the solstice, is an homage to that knowledge.

“It’s important for me to convey to people that we were not just living in mud huts somewhere collecting nuts and berries,” the artist says wryly. “We were watching the heavens for planting cycles, hunting, weather. A lot of science and technology happened based on astronomical observation that had to do with our well being.”

Sakiestewa’s fascination with the heavens also exists on the scale of her studio. Her nebula tapestries, some of which are currently on view in the “Hearts of Our People: Native Women Artists” exhibit, which was organized by the Minneapolis Institute of Art and is on view at the Philbrook Museum until January, were born from images sent back to Earth from the Hubble Space Telescope. The inherent painterliness of these stellar phenomena immediately spoke to the artist, and the swathes of color layered like watercolors inspired her to translate this diaphanous sight into cloth. The question became, then—how does one create the illusion of layers within the single plane of fabric?

The nebula, with its overlapping space clouds, beautifully illustrates the objectness of weaving. Consistent with the traditions of weaving from the American Southwest, the works are finished on both sides, making neither the dominant one. Though weavings result in a single pliable plane, they are three dimensional objects, in which colors are physically entwined and layered. Though the extent of the image’s depth is largely illusionary, the threads do duck in and out of sight, in the way clouds of star dust mingle with each other.

After this series was completed, the artist moved on from her weaving practice, as she calls these tapestries, “the zenith of the best work I could do.” Since then she has taken on another challenge—painting and printmaking. Of this new discipline she says, “I don’t feel like I’ve mastered it. I haven’t gotten to a level that’s completely satisfactory. There’s still more I can do.” Though this new work appears a departure from her previous oeuvre, it is in line with her ethos. She herself said it best: “I feel like I do my best work when I know the least about something.”