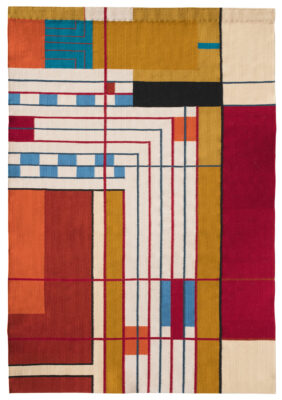 Ramona Sakiestewa is about as clear and forthright and sweet as any person could hope to meet or be. Which explains in part why her woven abstract paintings, often devoid of anything figurative, narrative, or perceptible, have appealed to so many people: as nonrepresentational as they are, they’re beautiful but full of sinew and depth, elegant, straightforward but inherently, deceptively complex. And in a way—much like Sakiestewa herself—almost defiant and reluctant at being put into a box. (How, after all, can anyone delimit the range of someone who, after teaching herself how to weave based on the writings of anthropologists, went on to create her own versions of Navajo textiles, who abstracted katsina motifs, and who had the intuitive genius to make pieces based on designs by Frank Lloyd Wright and paintings by Kenneth Noland?)

“When I was a teenager, I had a very bad experience with my mom’s second husband when we spent one year living in Daytona Beach, Florida,” recalls Sakiestewa, seated in the cozy A-V kitchenette of the large studio she shares with her husband, Andrew Merriell (who designed their spacious atelier, across from their house, and whose company plans and designs museums and exhibits). “It was a household of No. So when people say No it’s pretty much not relevant when I really want to do something.”

So never mind her Native roots. Never mind her gender. Never mind the traditional assumptions about what weaving is or where it belongs or who should or shouldn’t be doing it. Sakiestewa, without ever making an issue out of her Hopi background, her femaleness, her medium, simply put forward herself and her art, clearly, candidly, confidently. Which is how she’s approaching her latest incarnation—having given up weaving for the worlds of printmaking and architectural design. But the fact that her weavings practically demanded they be viewed on much the same terms as any fine art, most of her prints and designs will no doubt center on the same concerns her tapestry-paintings did: color, texture, and composition.

“I knew as soon as elementary school that I’d be an artist.” Says Sakiestewa. “Why? I just liked making things.” She started off at four when she was given an electric Singer sewing machine. By second grade she was making most of her own clothes. Born in Albuquerque’s old Indian Hospital in 1948, she spent most of her childhood there (excepting that one dismal stretch in Daytona Beach) before moving to Sedona, Arizona, where she spent her first three years of high school until she was kicked out for having a bottle of scotch in her bedroom. “It was traumatic,” she remembers, “but it was the best thing that ever happened.”

Ever precocious (true to her only-child status), she returned not to Albuquerque but to Santa Fe, where she talked the headmaster of Santa Fe Prep into letting her finish out her senior year there, and stay at his place in exchange for taking care of his kids. “I grew up at a time and place where women were doctors, lawyers, administrators, they could do anything they wanted, it wasn’t an issue,” says Sakiestewa, whose mother worked as a nurse. “So I believed women ran the show. It wasn’t until I went to the East Coast for school that I realized women didn’trun everything.”

School was New York City’s School of Visual Arts, where she studied textiles at night after a day of fulltime administrative work at Columbia University’s engineering department. After three years at SVA, she moved to Mexico City for one year. There, she saw her first Josef Albers show and, although she didn’t fully appreciate it at the time, absorbed the country’s ever-present murals and indigenously influences architecture. “Later, I realized that I draw on all that in my work—the murals, the architecture, the landscape,” says Sakiestewa. “In a way, I was a visitor of life back then.”

She returned to New York, but only briefly. In time, she moved back to Santa Fe. She worked as a waitress, she worked retail, then she got a job with the state arts commission, funding Native American and Hispanic arts projects. As satisfying as the job was, though, she wasn’t making her own art. So she got back on the loom, then started weaving with a group in Espanola, then began to show her work at Indian Market. In 1981, she opened her own studio.

“I did Indian Market for many years, from when my son was 5 until he left for college at 18,” says Sakiestewa, who at the time was married to the poet Arthur Sze. “Indian Market’s a great springboard, but it’s not completely who I am.” So, even while she was showing her textiles at Market, she also made a point of selling her work to galleries. Art galleries. “I have not shown my work at a crafts-based gallery—ever,” she says. “But I was also very lucky—I got into LewAllen early on.”

Lucky, but determined (or so it seems in hindsight) to make her own luck. Knowing that she’d never be able to make a living selling her work only at Indian Market, only at local galleries, or only to local collectors, Sakiestewa’s openmindedness—artistically and businesswise—opened up her opportunities. “Most of my collectors are on the coasts, and they’re well-educated and well-traveled,” she says. “But you have to work as through you’re in a universal artistic community. I really had a much broader experience than had I lived just on the reservation. So I had a broader idea of who Indians were.” And could be.

Still, as extraordinary as her work was, it initially ran into criticism. For one, in Hopi tradition, weaving was men’s work: it’s also very traditional and very specific as to designs and colors. But Sakiestewa, a freak for color, loved blending colors together. And she favored abstract designs, or she’s take a section of something she liked and blow it up. “I have a real respect for people weaving in the 19th–century Southwest,” she says. “But my work has always been full of color. It comes to me really easily. It’s part of growing up out here.”

Her proclivity for color, and her equally strong shop-by-touch textile fascination with texture, has taken her all over. On a weaving expedition to Peru, for example, she was given a recipe for dyeing cochineal, which she blended into her own work with great success. Likewise, a trip to Japan yielded a newfound love for green, which she later paig homage to in some of her pieces. “Tapestry is really just an exploration of texture and the layering of color,” she explains. (On an extrapolated level, too, her artistic tastes and talents led to her helping to establish ATLATL, a national Native American arts and cultural services organization, and to her serving as the first Native American director of the Southwestern Association for Indian Arts, the group behind Indian Market.)

“Leaving weaving behind is a terrible risk,” says Sakiestewa, who’s been taking printmaking classes with Ron Pokrasso. (“He’s been great,” she says. “He’s so open, and he doesn’t guide you.”) “But I’d worked as a weaver for 30 years and felt like the last show I did was perfect. That was kind of it. I wanted to do different things. Besides, there’s a lot of layering of color in printing. With weaving, it was the visceral experience of color. With printing, too, you can assemble images and concepts and color that you can’t do in weaving. You have a lot more tools available. Plus, I’ve never done literal work like this with figures.”

Also, after working on the National Museum of the American Indian (1994-2005), work she calls “the project of a lifetime” and where she met Merriell, Sakiestewa got into the collaborative aspects of printmaking and design. “I don’t worship my work, so it’s been easy for me to work in a team environment,” she says. It’s something, too, that taps into her nature, into being able to be who she is—and accepted as that. “I just want to be seen at face value,” she adds. “As just another artist.”