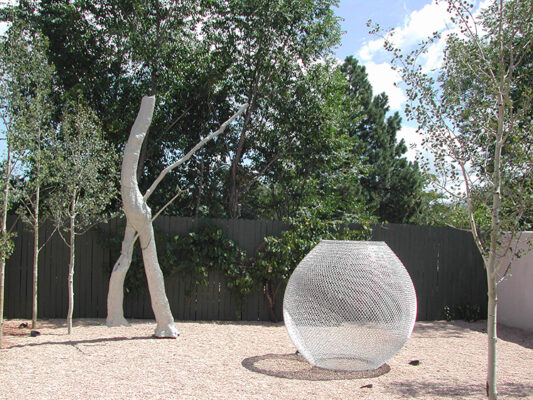 If trees shed their skin like snakes, the world’s forests would be littered with castings that resemble Robert Lobe’s art. His sculpted trees are eerily realistic, but, he says, he is not interested in mimicking nature. “I think the work comes out of classical sculpture – that includes modernist sculpture through Donald Judd and minimal art. In part, it begins with process – the idea of hammering aluminum around trees, the idea of all that detail being condensed and focused on the skin.”

At one o’clock on a recent afternoon, Lobe answered a call to his studio. As is often the case, Lobe was working in a forest in eastern New Jersey, not far from his New York City studio. The cellular connection was surprisingly clear. “This place becomes like the inside of my mind – I know it so well,” Lobe said.

Lobe encases trees and rocks in sheets of aluminum, using mallets and a pneumatic air compressor to stretch and tighten the metal. He uses several gauges of aluminum sheeting on each sculpture. Thin-gauge metal conforms snugly to the texture of tree bark or granite. The thousands of indentations he leaves on thicker gauges of metal create a surface the artist calls “fictitious.” Such patterns suggest textured bark, but on close examination, Lobe’s dents look more like fractured stone. His method is a form of repoussé, a technique in which metal is hammered, usually from the inside, to create designs or forms. In the third century B.C., Greeks used repoussé to produce armor plates. Perhaps the best-known modern piece of repoussé is a 19th-century copper building made by a Frenchman: Liberty Enlightening the World, better known as the Statue of Liberty.

Two of Lobe’s smaller works – Walking Tree, at just over 11 feet tall, and Summer Sound, which is a little more than 8 feet in height – are included in Modern Dimensions: Contemporary American Sculpture, the inaugural show at Eight Modern. The Delgado Street gallery is one of the newest in the Canyon Road area.

Summer Sound is an assemblage of rock, branches, and trunk that represents elements from two sites, Lobe said. But Walking Tree was molded from a single model he found in the Adirondack Mountains in New York. Lobe was unable to carry his 250-pound air compressor up the steel incline to the tree, so he cut it into pieces and carried them to his truck. The length of the dominant trunk was made in sections, which Lobe assembled slightly askew. Thousands of elongated hammer marks twist along its length, and these dents sometimes take turns that seem less than natural.

Lobe’s larger works present additional challenges. To make impressions of giant boulders and trees, the artist carries his tools to his models, and after hammering aluminum around their girth, he has to cut it free. Later, in his studio, he reassembles the silvery membranes, making no effort to disguise the seams. In the final stage, the sculpture is heat-treated and sometimes anodized. The gray-silver surface of heat-treated aluminum reflects light like metallic ash, causing many observers to comment that Lobe’s art has ghostly qualities.

When Lobe began making aluminum sculpture during the 1970s, his work seemed out of step with the art world. Michael Heizer was bulldozing massive amounts of earth in Southwester deserts, and Robert Smithson had recently completed his Spiral Jetty in Utah’s Great Salt Lake. Such “earthwork” artists applied minimalist ideas to the landscape, Lobe said, but his work grew out of a different impulse – a need he felt when surrounded by nature in all its randomness and chaos.”

“There is a whole part of nature that is so vast you want to incorporate it,” Lobe said. “You want to incorporate the way it looks, and you can do that if you touch it. Even though you can’t touch the top of the mountain with your hands, you have a desire to be there and to feel it because it’s so vast. It goes back to classical landscape, but it’s not so much about the insignificance of a single person or the glory of the universe. It’s just a kind of hormonal thing, and it’s great.”

Lobe admits that some his art has an anthropomorphic character. “In order to keep it in the realm of sculpture and art and not have it turn into some animalistic entity that just needs life breathed into it to walk away, I have to keep everything in balance,” Lobe said. Some of his trees echo ancient bronzes like the Charioteer of Delphi, circa 470 B.C. Excavated in the sanctuary of Apollo at Delphi, the ancient Greek charioteer feels ancient and grounded. Similarly, Lobe’s trees which are also much like columns, seem oddly rooted and able to withstand a storm or two.

Like ancient bronzes, Lobe’s forest repoussés are hollow, but classical sculptors always created a sense of stability, while Lobe celebrates hollowness. He lops off the ends of branches, leaving pipe-like openings. Holes left by pneumatic tools and cracks where metal has stretched beyond the breaking point allow glimpse into the sculpture’s dark interior.

Lobe’s repoussé pieces can be thought of as the residue of the artist’s experiences of touching nature. “There’s something that you can’t identify or define, but you have to touch it,” Lobe said. “And you remember it. You can’t recreate it in your mind because it’s so specific, and each time you see it, it’s different. There is something about grasping it in a very physical, tactile way that people relate to.”