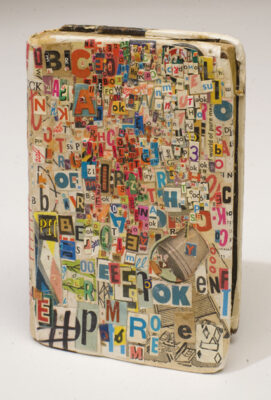 Lance Letscher’s new show is an array of his familiar collage style in two dimensions and of iconic objects of adventure (pistols, a full-size motorcycle), expanding the artist’s scope of expression by way of illustrating his first children’s book, The Perfect Machine.

Letscher’s work, long a sort of paper kaleidoscope of broken text and images built from butchered books and other bastions of print arranged in seemingly obsessive patterns, makes the leap from flat ground only after exploding on that surface. The narrative of The Perfect Machineis vividly captured by what are possibly Letscher’s most representational creations thus far, with shards of color and typography and hacked images streaming from the young protagonist’s head–or where a head or body, occluded by the stunning graphic tumult, might be.

Before images can stream forth, of course, before they’re displayed with the meticulous vigor common in Letscher’s work, images or the idea of images tend to remain locked within a creator’s head. This seems to be the message behind the wide piece called Talking Cure, where dozens of boxes of many colors cover the white ground, waiting only for the therapy of art or something more clinical to unlock them and unpack them and let the contents flow toward greater relief if not actual glory. With this exhibit, though, we suggest one could make a case for glory.

Just seeing these mostly two-dimensional works displayed on the gallery’s walls, observing the brilliantly collaged objects drawing light to their jarring depths, we wouldn’t think they were part of a sequential tale, much less one intended for children. But then, we wouldn’t think that other than the luckiest child in the world—or the most discerning collector—would be gifted with the knowledge of a collection like this.