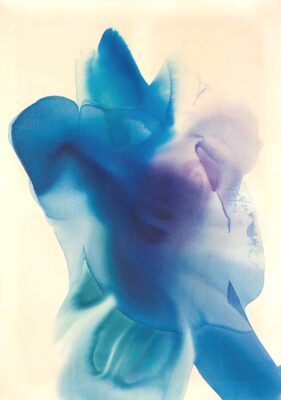 Rothko, Pollock and De Kooning regarded him as their equal. So why isn’t Paul Jenkins’ work celebrated?

Paul Jenkins, aged 82 and now working with acrylic on very large canvasses, has outlived many of his close friends and colleagues, including De Kooning, Rothko, Pollock, Barnett Newman, Lee Krasner and Michaux. All of them treated Jenkins as a peer and equal, yet he has not so far achieved comparable fame or market status. I doubt if this worries him, for he will surely know that recognition, which cannot be quantified into dollars or a number of entrance tickets, is something different. Nevertheless, I can’t help wondering why.

It may be because his work makes fewer references than that of his friends to the history of European painting. He is not so much a rebel artist as a foreign one. And this could mean that institutional acceptance takes longer. In any case, the proletarian city of Lille is currently offering him a magnificent exhibition in its Palais des Beaux Arts. The Redfern Gallery in London is also holding a show of his work.

Why do I say foreign? In the immense entrance hall to the Palais, four 10-metre high canvases are hanging. They are as tall and vertical as the architectural columns. Each one is an articulated presence, twisting upon itself, rising up as if it had limbs although its limbs are neither human nor animal. Impossible to think of them as abstract – a European art-historical term. These presences are totemic. You look up at each one and feel how in that thin hanging strip a specific place is towering above you. The places are silent, knowing that their colours are strident and can speak for themselves.

Downstairs are 50 more of Jenkins’ paintings, hung on black walls and artificially lit. One watches them; one doesn’t look at them. (Maybe this is why all his titles include the word phenomena.) One watches them as one watches flames flickering at night in a fire, which abruptly stops for an instant (an aeon) and then imperturbably continues. And here it becomes even more evident how closely his work is linked to Native American beliefs, secrets and vision.

The so-called “non-figurative” canvases are full of a nomadic sense of place. They present real forms that simply have no address, and which can’t be given a sedentary name. This is how they are foreign. For example, a large four-metre long painting entitled Phenomena Astral Tundra. It is divided into two halves; on the right hang “folds” such as cloth or canvas make with a tent; and on the left extend distant, endless folds of land. In both halves the colours are of the same family, or, if you wish, have the same inheritance. Colours are the essence of his work. Not as a means to an end – although he is a master at handling paint – but as protagonists, agents, within what he paints.

What do they look like, these colours? If considered alone, each colour is strong, decisive (no gradation for doubts, no tentativeness) yet at the same time never crude. Each one is a colour that carries far, the opposite of intimate. When seen together (and his paintings are about their encounters) they acquire the special lustre – or what I would prefer to call the “speed” – of synthetic colours, like polyester or epoxy resins. Go to the back of any large supermarket, where the damaged, perished goods and their ripped packaging have been dumped for collection, and you will find the palette of colours from which Jenkins works to make something utterly different; hydrocarbonate colours that didn’t exist before the late petroleum age.

Maybe we are now approaching the originality of his achievement. On the one hand he is inspired by the vision of the indigenous nomadic peoples of North America, and on the other he finds and uses colours and colour-combinations that belong to the age of modern plastics. Thus he steps over – which doesn’t mean to say he’s ignorant of – the four centuries of white art that separate these two periods. And this allows his very act of painting to play with and refer to other more intuitive, less cartesian branches of knowledge and perception.

In a painting such as Phenomena Navigator to the Four Winds, the colours – the protagonists – inherit a knowledge of plants that has nothing to do with the botany of Linnaeus, a knowledge of water close to the knowledge of beavers, a reaction to air such as is traced on the surface of waters, or an awareness of redness that can immediately distinguish without any explanation between danger, pain, desire and strength.

It’s worth noticing here that there may be a parallel between Jenkins’ development as a painter and some ongoing global political initiatives. In the face of the destruction of the planet under the tyranny of profit, many people are associating themselves with threatened indigenous peoples and with their earlier experience of surviving and maintaining a dialogue with nature, and these initiatives are made more possible thanks to the latest communication technology. There’s a similar leap over the same four centuries. Paul Jenkins’ work of the past 20 years is probably prophetic.

Yet this is not its secret. Return to his unique use of colour. He often refers to the prism because it demonstrates scientifically how colours are born not in, but from, light. And light is the precondition for life. So, as a painter, he treats colours as if they were the heralds of life. Painting with them, he imagines them at the moment when, for the first time, they are being reflected from a substance, when their accommodation (as it were) is far from sure, for nothing, not even them, has yet been named.

At such a moment colours are messages for what is about to begin, like the messages of a DNA code. And it is the colours that promise a continuity from mineral to vegetable to animal to soulful. One looks at his painted blues, reds, greens, blacks, yellows and they persuade us that they are our earliest ancestors. This is the secret of his work – Paul Jenkins: Major Works is at the Palais des Beaux Arts, Lille (33 3 20 06 78 00), until November 20, and the Redfern Gallery, London W1 (020-7734 1732), from October 25 until November 24.