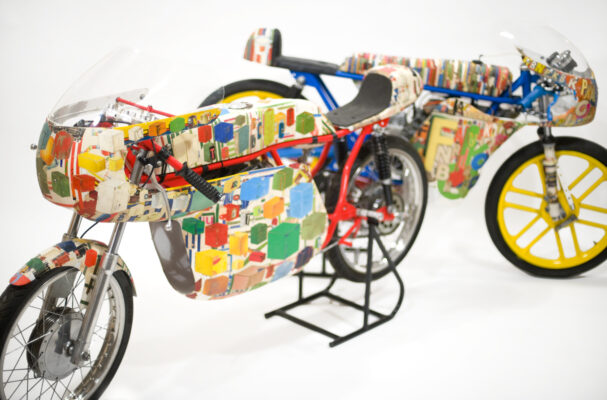 A Boy and his Brain

When I met Lance Letscher in his tidy studio in North Austin, I felt a flicker of recognition though it was the first time we’d met.  Letscher’s made a name for himself with his detailed, colorful collages that create imaginary worlds out of relics of the past, including houses and cars cut out of vintage model train catalogs. He’s also the artist and author of a children’s book, The Perfect Machine, and that’s where we’d first been introduced. Letscher’s quiet intensity has seeped into the book; you could call it a conceptual autobiography.

The Perfect Machine takes place inside the mind of a young, intensely introspective boy as he discovers the creative process. The illustrations are collages, often abstract, which reflect what’s going on inside the boy’s mind. He likes to hole up in his child’s workshop, a hut “made up of things that other people throw away,” and contemplate what might be “the perfect machine.”

He considers motorcycles, guns, rockets, and tractors, then dismisses them one by one. A city on wheels? Pretty cool … but not perfect. He considers nature. A tree, he realizes, is a “very incredible machine!” As the boy’s thoughts evolve, the collages that accompany the text go from jumbled lines and random images and letters to tidy, color-coded boxes. After a dream full of vibrant images and words on the page, he has his eureka moment. He wonders what kind of machine can “write a book or paint a picture? Can’t I do all of these things?”

The book has a heaviness to it and is more a story of contemplation than liberation. There’s no mistaking it as a child of its creator. The boy from The Perfect Machine has grown up, but his essence is recognizable. Letscher is serious and introspective, clearly the type who would rather be in his “hut,” immersed in his art and ideas, than be interviewed.

Letscher admits he prefers to let his work speak for itself. Even publishing The Perfect Machine made him uneasy. It was the first time he had written a narrative to go along with his artwork. “I got very self-conscious about it,” Letscher says. “One of my tactics has been to create art that has very little to do with me, so I don’t have to worry about people thinking I’m crazy or soft. I don’t have to worry about my faults coming through my work. But this story is very revealing, in a personal way, and that created a lot of anxiety.”

Like the boy in The Perfect Machine, Letscher has been making things for as long as he can remember and always knew he would be an artist. “I never had a backup plan,” he says. He remembers being mesmerized by the art in children’s books, like the vibrant line drawings in Ferdinand the Bull. He moved on to fine art, everything from Austrian expressionist Egon Schiele (jailed at the turn of the 19th century for displaying erotic art in a space accessible to children) to the conceptual drawings of M.C. Escher. He started to draw and copy things, especially from the Whole Earth Catalog. Letscher’s attraction to the catalog’s sprawling, diagram-heavy pages has re-emerged in his collages, which are full of vintage images of everything from miniature planes to intricate gearboxes. “I discovered the Whole Earth Catalog before puberty and learned about everything from mechanics to sex there,” he says.

After graduating with an MFA from UT-Austin in 1989, Letscher began to create intricately carved woodwork and furniture. Soon he was working with marble, which is very time-consuming and difficult. “I was stronger and more ambitious then,” he says. “I wanted to take on the heavy hitters. It was all wrapped up in my ego.”

Letscher would work an entire year on one marble statue, painstakingly carving huge pieces of stone that weighed hundreds of pounds; the finished piece might measure a cubic foot. Sometimes a piece would not work out, and he would have to start over. Because of the slow nature of the work, it proved hard to find galleries to display it. “It was a real crisis period,” he remembers. “It was tough to realize I was going in the wrong direction.” Letscher has saved only one marble work from that period, a heavy carved rendition of a human skull that sits on his desk.

After several years of frustration, he decided to try something radically different in 1995. He began drawing quick sketches—simple, monochromatic pieces inspired by nature—then cutting them out and pasting them on top of each other to give the drawings a sense of space. “I wasn’t really approaching it at as collage at first,” he says. “I wanted to find a way to work without thinking about what I was creating. I needed to find a new way of thinking. It evolved very gradually.”

I ask Letscher if it was liberating to stop struggling with marble and embrace collage. He grimaces at my word choice. “I’ve never had a sense of liberation or bliss about my work,” he says. “I’m very anxiety-driven. I’ve been varying degrees of miserable my entire life.”

But collage did allow Letscher to make a living. His work is popular among collectors, and he can produce enough of it to stock galleries. He has had six shows this year—not that success makes the work any easier. “When I think about it, I’m finally doing everything I wanted to do,” he says. “But when I’m sitting here cutting, it’s still the technical issues I’m dealing with. Trying to solve a particular problem. And trying to continue to be creative and create things that are powerful—and not inhibit it. The obstacles I have to overcome are my own obstacles.”

Letscher’s work often tells a story. One collage shows a human-like figure whose head seems to explode with ideas. It’s the kind of art that has obvious appeal to children as well as adults. So it was a natural fit when, a few years ago, he was commissioned to do a large collage outside a surgery room at the Dell Children’s Hospital in Austin. In that work, he played up what he calls the “Where’s Waldo effect” of his work by including words and pictures from children’s books.

Letscher has a certain childlike attraction to cool planes, trains and bikes, which all find their way into The Perfect Machine. For instance, he long wanted to buy a rare, vintage racing motorcycle that’s too light and small to legally ride on the streets. “I’d show it to my wife and she’d say, ‘What are you going to do with it?’” he says. “So eventually I came up with a strategy to make an art project out of it. So I got to buy it.”

That motorcycle, covered with a collage of brightly colored boxes, fills a spread of The Perfect Machine along with other cool, boyish stuff such as a yellow-and-blue, plaid-plastered berretta. (This being a children’s book, the boy decides guns are not a perfect machine because “people often hurt animals and other people with them.”) Letscher hopes that the book appeals to kids much like him, the ones struggling to channel powerful imaginations. “I don’t have an evangelical sense about art,” he says. “I don’t think it will change the world. But for certain kids, it could be important in their life. It could make them interested in making things. I believe in that.”