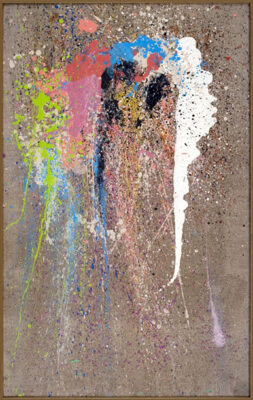 Former Californian Ronald Davis, who went by just the name Ron 40 years ago, has also kept thinking seriously about the peculiar relations between what paintings contain and what they are, though the limelight deserted him after the 1960s.

Trillium Press recently renamed itself Electric Works and relocated from the Peninsula to a San Francisco venue large enough to hold modest exhibitions. The fourth so far, which ends today, glances through five decades of Davis’ work.

Many visitors will recognize, from art history books, Davis works in tinged resin such as “Double See Through” (1969). In their scummy color and translucency they look today like flip West Coast rejoinders to the shaped canvases with which Frank Stella made his name.

Davis worked his way through a phase of painting shapes without scale on large, rectangular canvases such as the 6-foot-tall “Upright Striped Slab Duet” (1986). The painting seems to fall halfway between perspective exercise and design for a possible sculptural environment.

But such pictures, in this survey, look like ways Davis kept his hand in while waiting for computer imaging technology to make possible his dye-transfer-on-aluminum images of the past few years.

These pieces present plainly unreal objects, again without scale, in illusionary spaces as seductive to the eye as their material supports are solid.

The ubiquity of computer technology may make it seem as if anyone might have arrived at these peculiar, objectified dreams of sculpture. But even the present slender history of Davis’ career says otherwise.