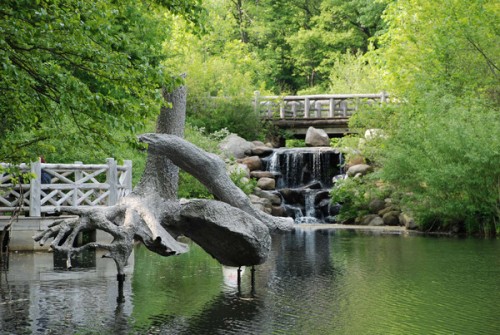 Throughout this summer and fall, the grounds surrounding Prospect Park’s Boathouse will feature a sculptural installation by the New York-based artist Robert Lobe (b. 1945). It is the ideal setting for Lobe’s work, which takes inspiration from shapes and textures found in nature. These Lobe studies in particular were inspired by the woods in Northern New Jersey, near a section of the Appalachian Trail where he creates most of his works amidst the boulders and trees. For years, he has encased trees and rocks in sheets of malleable aluminum. Through countless mallet strikes, a pneumatic air compressor, and a variation of the ancient metalworking technique known as repoussé, in which metal is hammered around an object to obtain shapes and patterns, Lobe provides his subjects with a snug metal armor that both mirrors the characteristic surface of the contained, and renders it abstract. Meanwhile, joints, seams and bolts are left exposed to reveal the process of mechanical construction.

Commissioned by New York City’s Department of Parks & Recreation and the Prospect Park Alliance, Lobe’s outdoor exhibition “Nature in Nature” features three works, “Invisible Earth,” “Antique Jenny” and “Nature’s Clock.” They are located around the Park’s historic Boathouse, originally built by Frederick Law Olmsted and Calvert Vaux. While “Antique Jenny” is located on a grassy triangular intersection across from the park’s notable ancient tree the Camperdown Elm (made famous in the poem by Marianne Moore), “Invisible Earth” is installed within Prospect Park Lake, aka Lullwater. “Nature’s Clock,” the largest of the three, is situated on a small hill, chosen by Lobe for its resemblance to the sloped terrain of the Appalachian Trail near his home. (Prospect Heights Patch has pictures of all three.)

The invitation to create an installation in Prospect Park “came up late last October,” explains Lobe, who up to that date was unfamiliar with the grounds. “I started at Grand Army Plaza and worked my way in finding all kinds of places for these three pieces.” When he saw the Boathouse, things began to click. “I didn’t want to intrude on the picturesque masterpiece of [the location] but tweak along the periphery, where I felt these pieces would become fully realized.”

Lobe’s work addresses the divide between realism and abstraction. What looks like a tree stump from afar, turns out to be a metal object upon close inspection. What remains hidden from the eye however, is the fact that the metal is not cast but merely makes up a surface layer, obscuring the “nature” of the object underneath. While Lobe’s work references various historical and mythological concepts of nature, ranging from 19th Century Romantic landscape painting to Surrealism, it also addresses contemporary concerns. While digital reality increasingly blurs our perception of the natural world, Lobe’s work questions the essence, persistence, and fragility of nature.

“Nature in Nature” is not Lobe’s first public installation. Besides many temporary installations, Lobe has also completed commissions for the US Geological Survey Building in Reston, VA, in 1996 and for Eastern Washington University in 1993. But because of the many constraints with installation procedures, and the fact that these three major pieces are structurally complicated (he had to invent footing to install “Invisible Earth” in water, for example), “Nature in Nature” he says, is “by far the most difficult and ambitious installation to date.”

Stephanie Buhmann is a freelance writer based in New York. Her articles and interviews with artists have been published by Sculpture Magazine, Art on Paper, Chelsea Now, The Brooklyn Rail, The Villager, and Artcritical.com, where she is a contributing editor.