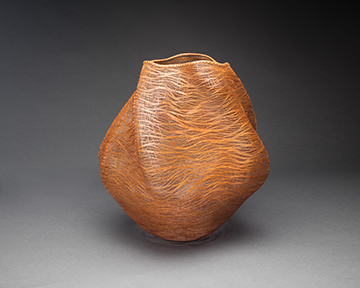 Bamboo weaving is a fringe art in its native Japan.

The Santa Fe Gallery TAI Modern discovered this languishing art form in 1997, and has displayed and promoted the delicate baskets ever since.

Owner/director Margo Thoma bought the gallery when the original owners retired in 2014.

“I can’t take credit for the gallery finding this art form,” she said. “My initial interest has been I had never seen anything like it and the thought of this disappearing made me sad. Once I began going to Japan and meeting the artists, I fell in love with it.”

Artists have woven baskets for millennia. In Japan, it emerged as a sculptural art form in the 19th century.

Tanabe Chikuunsai IV’s “Creative City” is a skyscraper tower of madake bamboo, the preferred material of most of these artists. Its verticality casts trailing edges of shadows echoing its architectural shape.

“Every time my father (Japanese bamboo artist Tanabe Chikuunsai III) drove on the Hanshin Expressway near the Nakanoshima district, he would say, ‘I like to drive this road. It passes many buildings.’ Indeed, he made many sculptures in the theme of the city. When traveling through the same area, I often remember his words. I began thinking about making a series of sculptures to capture the city as it is today.

“I like to see the lights from the buildings in the city while I am driving at high speed at night,” the younger Chikuunsai stated. “The shadows this piece casts represent the light and shadow of the city itself.”

“It’s an over-under type pattern,” Thoma said. “He’s varied the thickness of the strip he’s using, which creates the effect.

“I wanted to express the clouds and sky at twilight through this piece,” Gen stated. “It casts vivid undulating shadows, Open weave is one of my favorite techniques because of the visual effect it creates. Depending on the angle of the light, this piece casts a radiating shadow within and outside of the piece.”

Some bamboo artists begin with a pattern; others improvise, Thoma said.

The prominent contemporary artist Morigami Jin is known for his work with shadows.

Jin comes from a long line of basket makers.

“I made this piece to challenge my technical abilities,” Jin stated. “Art-making to me is the constant physical battle between the medium and the artist. It is no different from martial arts. The work at the end of such a battle is a visual record of the fight I had. Each side insists on its own will and ways, but meets halfway in the end.

“This is a style that is very much his own,” Thoma said. “He varies the spaces so they can look like waves with an undulating shape.”

In Japan, galleries and museums show these airy sculptures only in conjunction with other crafts.