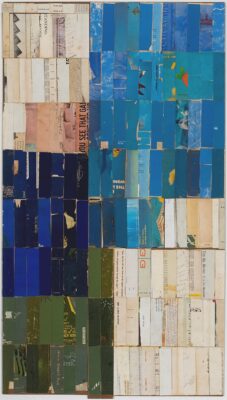 In the summers of his youth, Lance Letscher cleaned out vacated rental properties owned by his grandparents in northeast Texas. The expanse of grazing pasture and cotton fields resurfaces in his intricate, geometric collages, along with a curious habit of imagining other people’s lives from the traces left behind. His landscape compositions, sometimes mural-sized, recall Paul Klee paintings, aerial photographs, or stratigraphic maps, charged with a certain psychological resonance.

Trained as a printmaker at the University of Texas, Letscher starts with an intuitive sense of palette and scale. He prospects thrift stores, junk shops, and used bookshelves for old ledgers, notebooks, diaries, handwritten lists, letters, and recipe cards. Boxes of antique papers line his worktable. Sliced into strips, squares, or wedges and embedded in crystalline patterns, they become both shards of memory and the puzzle pieces of new fictional narratives, the clues barely legible.

An analogy to quilt making is apt. Hours poring over his wife’s collection of quilt blocks and patterns, as well as an eclectic stash of art books, inform both process and image, leading Letscher from one collage to the next. The challenge of breaking up predictable structure erupts in riffs on color, texture, and sheen, as seen in Red Bar. In the collages, the artist often contrasts nuances in thickness and commercial printing, selecting worn record jackets and pulp paperback covers with bent corners or the bright candy colors of children’s storybooks.

Recent works such as White Flag use juxtapositions and layering to create complex optical illusions. Letscher describes the floating pointed ellipses as “specks you see on a sugar-low.” Another strategy involves chopping up and reconfiguring pattern elements in order to achieve a dense, syncopated harmony, for example in In a Hopeful Way.

Letscher arrived at collage after making stone sculpture and wood constructions. He began cutting out and superimposing small realistic drawings of tree branches on cardboard for depth, then working with monochromatic book pages. His current work has propelled him beyond the sphere of Austin, Texas, to a New York debut at Howard Scott Gallery in Chelsea.

From Pablo Picasso to Kurt Schwitters, collage became a modernist vehicle for transforming mundane castoffs into art and fusing reality with abstraction.

In Lance Letscher’s hands, the medium achieves a new tension between precisionist patterning and the stuff of ordinary life. His prolific and growing body of work exhibits the elegance of a haiku or an Amish quilt crafted from vivid bits of memory and time into a classic form.
—Pamela Scheinman

Pamela Scheinman teaches in the Department of Art & Design at Montclair State University in New Jersey.