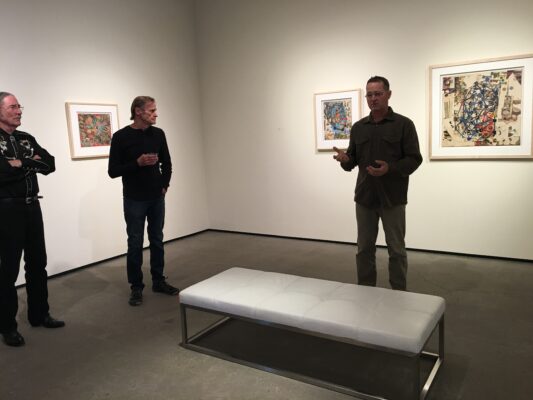 With Secret File, Letscher’s complex collages turn into coded messages and patterns. In the titular piece a mysterious figure carries a folder overflowing with mysterious papers and tinkertoy constructions. Secret File and its spilling secrets and inventions are, in Letscher’s words “parallel to the idea of creativity and how the work is produced.” Letscher lets his work evolves on its own, striving “stay out of the way (of the work) as much as possible.”

Letscher lives, works, and collects the various found objects that make up his playful collages in his hometown of Austin, Texas. Always on the lookout for unique materials, he stockpiles old book covers, newspaper clippings, vintage LP covers, recipes, and antique letters. The use of semi-recognizable items and materials gives Letscher’s work an unplaceable sense of nostalgia and familiarity, an almost “on the tip of my tongue” impression. “If while exploring them we find landmarks with intense personal meaning, we know that they are there in the service of Letscher’s vision for this particular work, and that our personal response to a specific element is only one component of the overall experience,” writes Charles Dee Mitchell in the 2007 catalogue Lance Letscher: Collage. His collages are comprised of fascinating patterns and textures; Letscher truly has an eye for harmony of color and the familiarity of his material adds to his work’s broad appeal.

Letscher was trained as a printmaker at the University of Texas art school, where he received his B.F.A. and M.F.A. In the 1980s, he began to attract notice in the Dallas art scene for his small sculptures, before transitioning to drawing, print-making and eventually collage. He is also the author and illustrator of the children’s book The Perfect Machine. He has been exhibited throughout the United States. Letscher’s work is expanding and gaining traction internationally, and has been shown in Paris, Berlin, Munich, Barcelona, London and Poland. In 2004, a mid-career retrospective of the artist’s work entitled Books and Parts of Books: 1996-2004traveled to four museums. In 2009, the University of Texas Press published a full-length monograph on his work. The subject of an upcoming documentary, by Oscar nominated editor and filmmaker Sandra Adair, Letscher’s process will continue to be chronicled throughout the year.