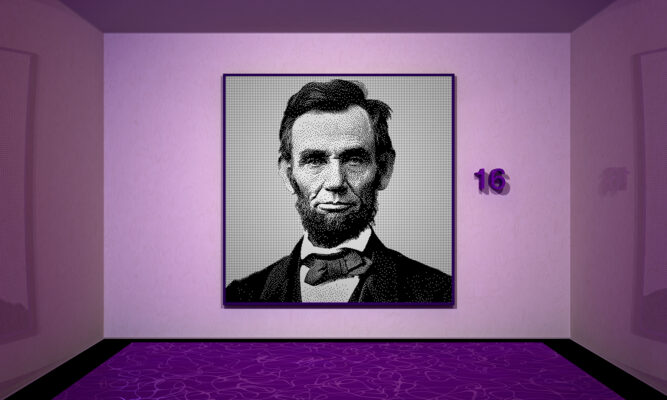 Ronald Davis: All the Presidents’ Rooms

Legendary abstract artist Ronald Davis has produced a comprehensive series of digital compositions, one for each American president, as well as current candidates John McCain and Barack Obama. Davis recasts portraits of each president as decorative elements in a wondrously diverse assortment of “rooms.”

Whether it’s a thumbnail image of Lyndon Johnson dwarfed by a bolt and a nut, or Andrew Jackson’s visage staring back at the viewer from the end of a skewed hallway, Davis’ surreal imagery offers unexpected, utterly original views of an American institution.

“History tries to lock things into time and space, but I can put James Buchanan into a tract house or [Ulysses] Grant at the bottom of a swimming pool,” Davis says. “…It’s not to show them as good or bad, it’s just about what happened on the journey.”

Similar to Andy Warhol’s explanatory statement, “I like soup,” Davis’ series of presidents’ rooms began because, as the artist says, “I like Truman.” Davis’ father took him to see HarryTruman speak in Cheyenne, Wyoming in 1948, so in the mid-1990s, when Davis was looking for a two-dimensional image to place onto the “wall” of a virtual room he was creating, he chose a clip-art portrait of Truman – leading to his first president’s room.

Davis picked up the project again in 2004. Energized by the upcoming election, he says he undertook “the somewhat obsessive goal to do all 44 (presidents), because once I had the first five in front of me, I felt they all deserved the same treatment.”

Davis models and renders his computer graphic images using high-end 3D software, then transmits them to ImageWizards, where the “pixel dust” is heat-fused onto sheets of aluminum.

Davis burst onto the international art scene in the 1960s, aggressively and vividly using isometric and multi-point perspective to offer an illusion of depth while maintaining the idea of painting-as-object for which post Abstract-Expressionist painting was known. Davis now lives on the Hondo Mesa north of Taos and has successfully explored a wide array of mediums in his career. His work has been shown in over 65 solo exhibitions and countless group shows and resides in public collections including the Art Institute of Chicago, the Guggenheim Museum, LACMA, the Museum of Modern Art and the Whitney Museum of American Art.