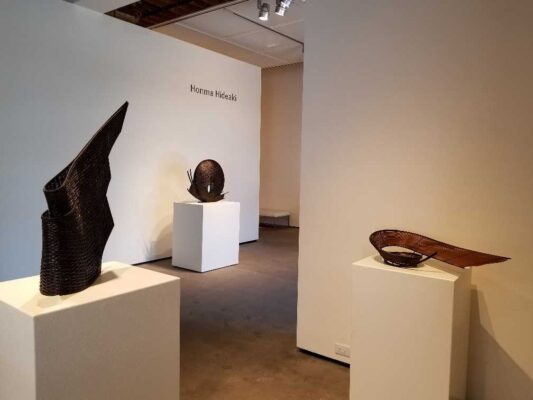 TAI Modern is pleased to present its upcoming exhibition by Honma Hideaki. A celebration of his thirty-year career, this solo show will feature twelve of the artist’s most impressive bamboo sculptures.

Honma’s dynamic works pay homage to the natural beauty of his native Sado Island, Japan. He often uses menyadake, a bamboo species said to grow only the island, and hand-cuts bamboo from the groves outside of his home. Certain pieces, such as Flowing Pattern 2018-B, are clearly inspired by the shapes and energy of the surrounding Sea of Japan. The strong curves of the piece delineate the form of a crashing wave, and the layering of bent bamboo strips resemble ripples on the surface of the ocean. The work suggests motion and force without any actual movement. Its mesmerizing quality lies in this visual suspension of motion, something only an artist of Honma’s caliber could capture so precisely.

“In bamboo art, one usually goes through traditional training – learning basket making before he or she moves on to making bamboo sculpture. Contrarily, I started my artist career late in life when I began assisting in my father Honma Kazuaki’s production studio,” Hideaki explains. “I thought not knowing basket making basics was a disadvantage in the beginning, but it actually helped me to think freely and allowed me to develop my own method and personal style.”

As a young man, Honma was a soldier in the Japanese Air Self-Defense Force. After an accident caused a major injury in one eye, he was forced to resign. His uncle, the pioneering bamboo artist Honma Kazuaki, had no children, so he adopted Hideaki, who loved to draw and work with his hands, as his son, student and heir to the family’s bamboo business.

2017 was a milestone year for Honma – it marked the 30th anniversary of his becoming an independent artist and it was also the year he lost his father. Consequently, he has re-dedicated himself to developing his individual style, making sculptures that can stand beside but separate from the work of his well-known father. His art is a part of the permanent collection of the Metropolitan Museum of Art, the Art Institute of Chicago, and the Asian Art Museum.

The artist will be giving a talk on Saturday, July 28 from 3-4pm. TAI Modern is able to provide translation services to the press for questions or written communication with the artist. TAI Modern is open Monday through Saturday from 10:00 a.m. to 5:00 p.m. For further information and image requests, contact Arianna Borgeson at (505) 984-1387 or arianna@taimodern.com.