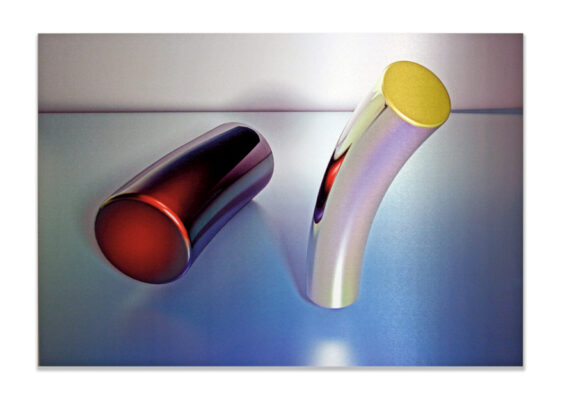 SANTA FE, NEW MEXICO—Eight Modern is pleased to announce its upcoming exhibition, 3D/CG: Ronald Davis. True to its name, this solo show focuses on three-dimensional computer graphics on aluminum and paper produced by Davis from 2004 to 2007.

Davis burst onto the international art scene in the 1960s and was one of the first California abstract artists of that era hailed by East Coast intelligentsia for the way his vivid, abstract art broke new ground in perspective and materials.

Davis turned a decades-long adherence to the two-dimensionality of abstract painting on its ear, using isometric and multi-point perspective to offer an illusion of depth while maintaining the idea of painting-as-object for which post Abstract-Expressionist painting was known. Davis has described his works as “painting as the illusion of an object.”

As the years passed and the artist has changed, so too has his art – but not his relevance or his willingness to pioneer new methods. Davis has always embraced the use of new technologies and materials to achieve previously impossible methods of artistic expression. And while his images in 3D/CG are indeed computer-generated, the touch and expertise of a veteran artist are omnipresent.

In his catalogue essay for 3D/CG, art critic Tom Collins describes Davis’s newest work and his process. “For the past couple of years Davis has been rendering images — mostly geometric abstractions, a coffee cup, strange “spaces,” portraits of U.S. presidents as framed portraits in a gallery room setting — on his computer screen using a high-end three-dimensional program…The resulting image-objects are confusing, subversive, paradoxical.”

Born in California but raised in Wyoming, Davis’s first ambition was to be a race car driver. That soon proved too dangerous and too costly, so Davis headed to the San Francisco Art Institute, where he studied 1960-64.

Within a year, Davis had his first one-man show, and before the decade was out, he’d ascended to the heights of the contemporary art world. In the decades that followed, popular success retreated, but his creativity never waned. Davis continued to explore formal abstraction and perspective illusion through a variety of media and styles, including splatter painting, encaustic, painted PVC reliefs and computer imaging.

In 1990, Davis purchased a 10-acre compound on the Hondo Mesa north of Taos. Three years later, he sold his Frank Gehry-designed studio in Malibu and relocated to New Mexico, where he has resided ever since.

And, in this decade, Davis’s striking new work and inclusion in a series of retrospective exhibitions at institutions like LACMA, the Denver Art Museum, the Norton Simon Museum and others have once again brought him back to the forefront of the art world.