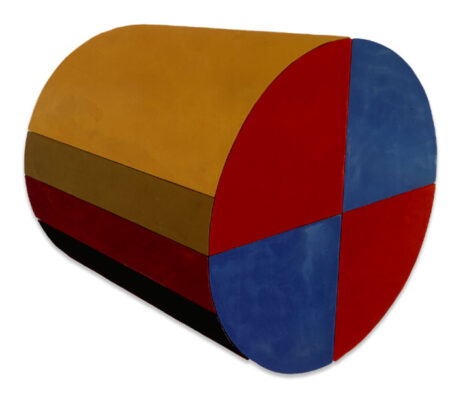 Renowned contemporary artist Ronald Davis’ three-dimensional computer graphics on aluminum and paper, opening today at Eight Modern, make technology the maidservant to art in a way seldom if ever seen in Santa Fe.

While Davis’ images in the new show, “3DCG,” are computer-generated, the touch and expertise of a veteran artist are obvious. He created the pieces exhibited in a high-end modeling and rendering software that allowed him complete control over how the images are shaped, colored, textured and lighted. A master printer then heat- fused the images onto aluminum. The result is images that would otherwise be impossible to obtain.

Davis himself doesn’t really see what all the fuss is about. “I’ve been doing this for 25 years, since the early ’80s,” he told the Journal from his home studio north of Taos. “And I’ve had a history of playing with perspective since I began doing art professionally, in the early ’60s. I taught myself the old way, beginning with isometrics and progressing to one-point, two-point and then three-point perspective.”

Born in California but raised in Wyoming, Davis first planned to become a racecar driver. When that didn’t work out, he studied at the San Francisco Art Institute, and in the mid-’60s had his first one-man show.

His work, in fact, turned a decades-long adherence to the two-dimensionality of abstract painting on its ear. He became famous among California artists of the time as a post-abstract-expressionist who was breaking new ground. Davis called his works “painting as the illusion of an object.”

In about 1970, Davis said, he was matched with a technology company, CalCom, for an “Art and Technology Show” at the Los Angeles County Museum.

“The company rep’s first question was ‘Do you know Fortran?’ (a computer language). I said, ‘What’s that?'” Davis recalled.

“It wasn’t a good match. We didn’t produce any art for the show,” he added. But the artist’s curiosity was piqued. He’s essentially been playing with technological advances ever since. “In 1976-78, I got interested in electronic music, so I bought one of the first Apples. I began doing 3D drawings. In 1982, I did paintings with that perspective,” Davis said, adding that his first computer-aided graphics involved printouts that he then reproduced in paint.

Davis spent the first 25 years of his career in Los Angeles, but he moved to what had been his getaway on the Hondo Mesa in ’91, sparking rumors in the art world that he’d “gone into seclusion.” He wasn’t secluded – he loves the Taos area – but working, continuing to explore formal abstraction and perspective illusion through a variety of media and styles, including splatter painting, encaustic, painted PVC reliefs and computer imaging.

“I’m much happier here,” he said. “I’m sure if I’d stayed in LA, my recognition might have been stronger, but I have good galleries, and I sell enough in Houston and San Francisco and LA to get along.”

In this decade, his striking new work and a series of retrospective exhibitions have brought him back to the forefront of the art world, yet this show in Santa Fe excited him more than others.

I knew (Eight Modern director) Jaquelin Loyd when she had a little gallery in Taos, and showed my work when I wasn’t showing elsewhere. She’s a great friend, and Eight Modern is a nice space,” he said. “I’m really looking forward to this show.”