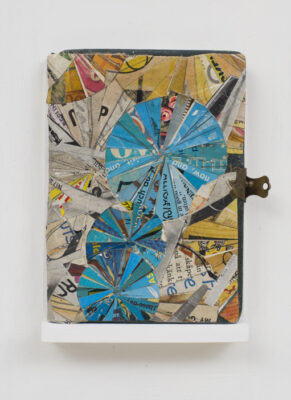 Painting by Other Means, Collages by Lance Letscher

JUST WHEN YOU THOUGHT ART HAD NO PLACE ELSE TO GO, along comes Lance Letscher with collages that reignite the element of surprise that was the medium’s birthright. Opening today at Howard Scott Gallery is a body of work that is a magical blend of whimsy and grit.

Collage has been described as an art of interruption because of the medium’s abrupt breaks of texture, pattern and plane But for a young Texas artist juggling three jobs and family life in the early 1990s, the term meant something quite literal. Impelled by a fractured work schedule, Mr. Letscher set aside the conceptual sculpture he had been creating out of art school in the late 1980s and began cutting up small, simple drawings to explore pictorial ideas. Out of those casual improvisations have come inimitable and exciting collages.

Mr. Letscher builds on antic juxtapositions between simple shapes on backgrounds of faded text. He is a celebrant of found papers: scraps of handwritten letters, grocery lists, old diaries, ledgers and magazine clippings patinated with age. A fine colorist, he salvages used paperback and album covers (remember those?) for his palette, a kaleidoscope of scuffed color enlivened by fragments of printed text. Individual works are rich in intelligible content, delectable to the imagination and the eye.

He is not the only artist using cast-off books and papers but he is one of the very few whose modernity supersedes the nostalgia of old materials without sacrificing their elegiac power. Every appropriation of derelict scraps declares a sharp contemporary wit. But in Mr. Letscher’s hands, the declaration rises to a threnody for lives that left no monument, only accumulations of ephemera poised for dispersion.

This exhibition is a roller coaster ride of mood shifts, from playfulness to solemnity. Size ranges from small, lyrical page-sized works to a single monumental landscape. An exquisite color sense and empathy with his materials create coherence among dissimilar design motifs. These are the twin axes on which Mr. Letscher’s madcap poetry revolves.

“Lucky Cats” (2005) rises vertically like a jagged geological cut-away of the earth’s crust. Colors, sawed from book covers, are non-naturalistic. (Trace the movement of pieces of a “How to Tell Time” Golden Book or a post-war savings bond advertisement, each functioning as a tonal note.) Weight and depth are created by bonding items to a substrate that is lovingly cut and pieced back together like parts of a puzzle. A sliver of bold text signals the impulse behind the pictorial illusion: “ different conception of nature in the last four centuries.”

Elsewhere, American quilt patterns provide a design source similar to what the Cubists found in African masks. Visual repartee between a folk aesthetic and a cool, sly modern one is evident in the swirling pinwheels of “Key,” (2005); the elongated, asymmetrical play on the log cabin design in “Magic Gown,” (2005) and variations on that favorite old pattern, the box quilt. One collage sets small bars of color dancing above the logo of the Grolier Society; another turns mournful with black rectangles arranged in dignified sequence across the back of a severed book cover, the threads of its binding tied like winding cloths. The combinations are uncategorizable and captivating.

MARIO NAVES’S PAINTED AND PIECED ABSTRACT COLLAGES are on view now at Elizabeth Harris Gallery. To have his show overlapping with Lance Letscher’s—and in the same building—is a delicious convergence.

In his art, as in his critical writing, Mr. Naves’s primary concern is for the way a thing looks. He knows better than most that creative intuition, not theory, is the soul of art making. So much depends on the ways in which an artist’s hand serves or stymies sensibility. Both artist and critic, Mr. Naves knows from within how a hand functions as an extension of the eye. The refinement of his touch and the sensibility that drives it is a pleasure to see.

His collages maintain that sense of fluid movement, of form and color migrating across the canvas, characteristic of painting. Paint is dripped, scraped, scumbled, sponged, patted and brushed on pieces of paper that are then torn and rearranged. Mr. Naves’s technique preserves the accidental aspect of the painting process while it subordinates all randomness to the cognitive, disciplined basis of traditional painting. Texture derives from the quality of papers, their edges summoned to the surface by creases and folds. Brushwork is already dry when he begins to tear shapes and manipulate placement. It is a working method that permits him to concentrate on color and form separately from paint quality. Illusions of spontaneity arise from careful deliberation.

Accustomed to the intimacy of his earlier collages, I was jolted by the size of these pieces. The work’s aspiration to the condition of painting is more evident in this show than in previous ones because of the expanded dimensions. This more aggressive work requires greater viewing distance; from several feet away, each collage is easily taken for a painting. Color areas achieve a self-sufficiency that is less apparent in smaller works.

Compare “Voyeur” (2005) with the monumental “On High” (2005); the subtle discretions of the modestly sized piece give way to more assertive emphasis on the linear edge of painted shapes in the colossus. With expanded measure come a heightened chromatic sharpness and bolder gestures, such as the whirl of broadly brushed dark pigment that dominates “Green Earth” (2005).

I miss the quietude of his smaller work but that is only personal preference. Overall sensuousness, color harmonies and alchemy of composition are constants.