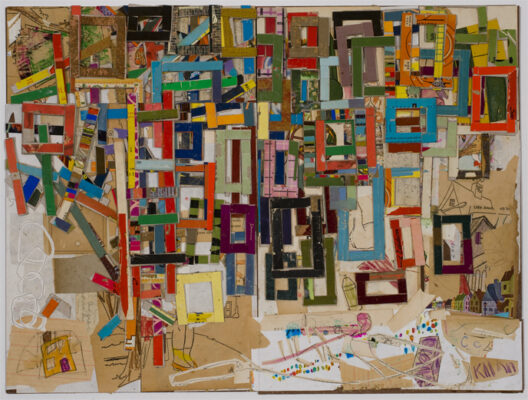 Austin artist Lance Letscher’s latest children’s book is “The Perfect Machine” (2010, University of Texas Press, Austin) and that is — no coincidence, obviously—the title of the exhibition of 17 recent Letscher collages opening at Eight Modern today.

The book didn’t influence his art, except indirectly.  He says doing a 9-by-12-foot commissioned mural for the Dell Children’s Medical Center of central Texas focused his art, “I started thinking about kids as my audience.  It started to influence the vocabulary I was using,” Letscher said.  “It used to be all chance and discovery.  Now I am orchestrating what I want, instead of what I happened to find.”

In the contemporary art market, Letscher, 48, is an emerging superstar, with recent solo shows in galleries from Seattle to Paris to Barcelona.  In his native town, he sometimes is called “the other Lance” in deference to cyclist Lance Armstrong, and a Letscher show in Austin reportedly always brings out the collectors to see his latest work.  “People are crazy about Letscher’s engaging yet elusive collages that are delicately crafted,” Austin American Statesman art critic Jeanne Claire van Ryzin wrote in 2004, “People just can’t stop buying Letscher’s collages, small or large, subtle or strong.”

The exhibition at Eight Modern is his first Santa Fe show.  His intense, complex, dense and abstract collages celebrate both wall hangings and found objects like guns and books.  Almost all of his media are recycled.  He harvests defaced textbooks, children’s readers, vintage album covers, magazine clippings, handwritten notes, recipe cards, business ledgers and other bits of found paper from closeout bins, yard sales and the Dumpster behind a nearby used book and record store.  In his studio, Letscher winnows the materials and organizes odds and ends, cutting them into strips and shapes and then piecing the scraps of paper into collages.

“I use found paper, book covers, old magazines, record covers, etc., to make my work,” he said.  “I am particularly attracted to worn surfaces, odd colors and obsolete typefaces.  I am primarily concerned with formal issues—the interaction of color, spatial shifts and compositional dynamics, and how these things can generate content.”

Eight Modern director Jaquelin Loyd clearly is a Letscher fan.  “His works are largely abstract and characterized by dense texture, color and pattern,” she said.  “They are rich and vigorous and compellingly complex.  The formal appeal of the work is enriched by the memories and emotional associations evoked by his raw materials.  Fragmented illustrations and dissected words and phrases hint at potential narratives.”  The works in “The Perfect Machine” reflect his shift to a “storybook perspective.”  His abstractions have expanded to include more recognizable forms and childhood imagery.

Psychological Resonance
In his teen summers, Letscher cleaned vacated rental properties owned by his grandparents in northeastern Texas.  The expanse of grazing pasture and cotton fields has resurfaced from time to time on his intricate and geometric collages.  His sometimes mural-size compositions have a psychological resonance, as if he were recalling people’s lives.

The artist’s work evolves constantly.  “One thing you learn quickly when searching for ‘rules’ in Letscher’s work is that no sooner do you think you have uncovered one than you find it contradicted,” art critic Charles Dee Mitchell wrote in his introduction to a recent monograph, “Lance Letscher: Collage.”

Formally trained as a printmaker at the University of Texas, where he received his bachelor’s and master’s in Fine Arts degress, Letscher ran the woodshop at UT-Austin for a number of years.  He began attracting attention in the 1980s Dallas art scene for his small sculptures of wood and marble, before transitioning to drawing and then collage.  He basically taught himself, cutting out and superimposing small, realistic drawings of tree branches on cardboard for depth, and then working with monochromatic book pages.
He has said he is inspired by three Austrian artists: Egon Schiele, Gustav Klimt and Friedensreich Hundertwasser, as well as “outsider art” and the Gee’s Bend quilt-makers.  He has few direct influences from the history of collage and assemblage, but the references to quilts can be seen more clearly.  Letscher’s wife is a quilter, and he has acknowledged poring over her collection of quilt blocks and patterns.

Letscher has been exhibited widely throughout the U.S., as well as in Paris, Berlin, Munich, Barcelona, London and Poland.  In 2004, a solo retrospective of his work called “Books and Parts of Books, 1996-2004” traveled to four museums.  His work will be at Eight Modern through May 15.