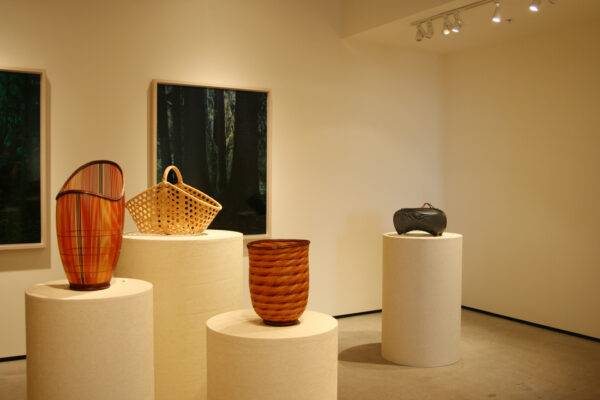 In 1970, there were between 600 and 700 bamboo craftspeople making a living in Japan, creating items ranging from simple food steamers and chopsticks to flower baskets of extraordinary beauty and complexity. The world has changed much since 1970. Today less expensive bamboo objects imported from Southeast Asia have largely displaced locally made wares in Japanese shops. In Oita Prefecture, which for over one hundred years has boasted the largest concentration of bamboo craftspeople in all of Japan, the number of people working with bamboo has shrunk by two thirds. The Commerce, Industry, and Labor Department of the Oita Prefectural Government has long appreciated the cultural and economic importance of bamboo crafts in the region and is actively promoting the field to ensure its long term vitality. Bamboo artists have also banded together to help their cause. The Oita Bamboo Fine Arts Association was formed to bring together both sculptural and more traditional artists, and the Beppu Bamboo Craft Union has looked after the artists’ interests for many years. Individual masters, such as Shono Tokuzo, Yamaguchi Ryuun and Morigami Jin, have taken an active role in encouraging the next generation of bamboo artists.

Two generations ago the apprenticeship of a bamboo craftsman might have lasted ten years. The first few years were often exclusively spent learning how to select and cut bamboo into usable strips for the master. It might take five years before a student was making simple baskets from start to finish. Many years passed before an ambitious assistant would offer works with their own signature to be judged by their master and the public. This may seem a daunting process to us in the West, but the apprentice knew this would lead eventually to a good livelihood, and all the years of disciplined focus aided in establishing a worthy personal style. Master bamboo artists of today will often speak of a self-transcending devotion to the tradition and to the medium itself. Many say they allow the bamboo to speak through them, and they strive to be true to the spirit of bamboo. This humility shows what is considered the ‘proper mind’ of a Japanese artist working in a traditional craft.

Modern teaching methods are more condensed. The two-year course taught at the Oita Prefectural Bamboo Craft and Training Support Center teaches the preparation of bamboo, the different plaiting patterns, and the vocabulary of knots seen in bamboo art, but then a student must find a mentor and, most of all, keep up full-time studio practice. However, the evaporation of the domestic market for bamboo articles means most students cannot support themselves through bamboo craftwork. If a graduate is lucky enough to be hired as an assistant by a master artist, and still wants to work in the field five years after splitting their first culm of bamboo, a threshold has been reached.There is a good chance this person will continue on the path of mastering bamboo art. Few who begin arrive at this five-year mark. Few have enough savings to live on for five years while they spend 60 hours a week honing their skills. To care for bamboo art’s future, we must find new ways for the student to earn whilethey learn.

For nearly twenty years, TAI Modern (formerly TAI Gallery)has exhibited Japanese bamboo art in the United States and Europe with great success, finding hundreds of passionate collectors. The strong international response to bamboo art has fueled efforts within Japan to promote and nurture this unique creative capital. The new artists exhibiting at the Japanese American Cultural and Community Center were challenged jointly by the Oita Bamboo Industry and Culture Association and TAI Modern to work on designing a centerpiece for the home that would be priced at a level affordable to many people. If a worldwide market for Japanese bamboo decorative arts could be rekindled, much as it was by the Arts and Crafts Movement of the late 19th century, a new source of earnings could allow young artists the time they need to master their medium.

The results of the centerpiece project are promising. All the artists deserve congratulations and I hope they forgive me for only mentioning a few of them. The work by Kizaki Kazutoshi, a student of Shono Tokuzo, has a strong design that connects it to his teacher’s famous lineage but employs a bold red color that is emphatically individual. Matsuda Hiroki’s exuberant fireworks-inspired piece will appeal to many viewers. Taniguchi Michito has created a playful, eccentric form that is weighted to stand at various angles.Yufu Hiroshi is working to synthesize his own style with the powerful techniques he has learned from his father, Shohaku, and Kodama Mie has enlivened a basic basket form by incorporating dynamic horizontal dividing layers.

Standing next to these youthful efforts are works made by the most accomplished bamboo artists in the world. While these artists’ works speak for themselves, I can’t help but mention several. Using the simplest of shapes, Abe Motoshi Kiraku’s pine needle plaited basket is a marvel of subtlety while Kibe Seiho’s basket, armored in aged, smoked bamboo, displays amazing, rich color. The Kajiwaras, husband Koho and wife Aya, staying true to the vessel form their entire careers, have created unmistakably individual styles that complement each other. And while the vessel tradition is ancient in Oita, the region is also the birth place of modernist, sculptural bamboo art. Shono Tokuzo, son of Shono Shounsai, the great pioneer of the sculptural tradition, strives to both communicate a contemporary sensibility in his art and honor the natural beauty of bamboo. Tokuzo’s work tends toward the philosophical, questioning the identity and role of a basket in its holding of something tangible and the identity of sculpture which holds space. Also trained in Shounsai’s studio, Tanabe Kochikusai is a seminal artist, being his master’s primary assistant during the creation of the first abstract art made of bamboo. Oita is home to individualists with free roaming imaginations as well, such as Sugiura Noriyoshi, Yonezawa Jiro, and Kawashima Shigeo.