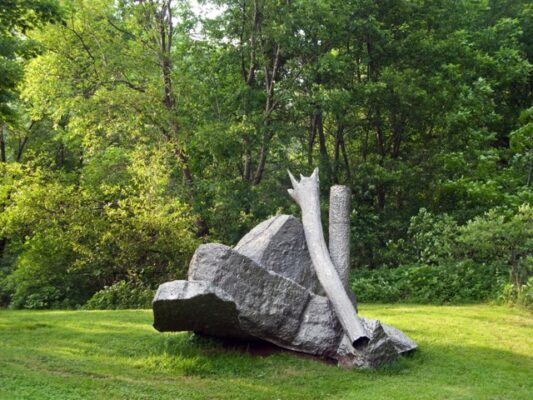 In traditional Japanese gardens, art and nature are so delicately nuanced and balanced that it is often difficult to discern where, exactly, nature ends and art begins.  The natural and the handmade–wilderness and rationality–are in harmony.

Sculptor Robert Lobe (b.1945) may not have the sensitivity of a Japanese gardener (his blunt forms are equally indebted to stage design, the art of trompe-l’oeil and the sculpture of David Smith), but his three hammered aluminum repousse sculptures– placed in and around Lullwater near the Boathouse in Prospect Park–wed Eastern and Western sensibilities.  Mr. Lobe’s hollow sculptures, which span nearly 12 feet by 14 feet, comprise aluminum plates, which are formed over large boulders and parts of trees and then combined and riveted into strange, bumpy, amorphous amalgamations that resemble petrified rock and wood, but which also can suggest monument and animal.

Each sculpture changes character in the round and changes color–from gleaming silver to driftwood-gray–in different light.  The crude cruciform “Antique Jenny” (2009-11) marks its place like an ancient headstone.  “Nature’s Clock” (2005-11) looks like a giant pile of kindling, yet its rock forms step upward with ceremonial conviction; and a tree form, splayed at its end, adds regal, crownlike flair.  Seemingly suspended above the surface of Lullwater is “Invisible Earth” (2007-11).  With the grace of a spider, it appears–in the water’s slow, mossy current–to creep along the surface of the lake.  Lurching, its forms intertwined-evoking lovers, a rogue wave, a sea monster and a mother and child–it transcends the elements of its fabrication.