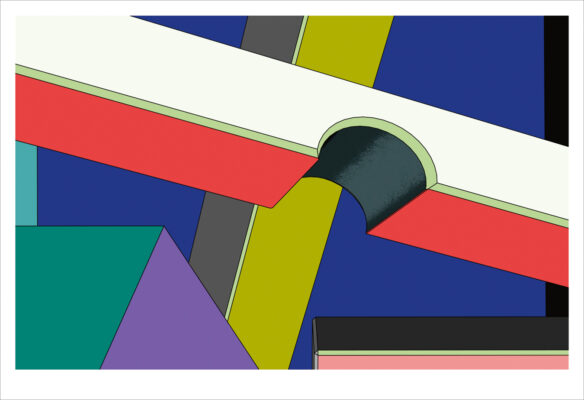 Magnetic North, Far from the Buzz

If New York is a magnet for artists who want to become famous, Taos is a magnet for a different breed of artists — those who care far more about making art than about promoting it, said David L. Witt, curator of the Harwood Museum of Art in Taos. Even though it is difficult to impossible to launch a national reputation from a small village in northern New Mexico, many artists moved there, for various reasons. Some worked in abstract styles long before there was any market for their work in Taos. In retrospective, the artists seem either idealistic or naive.

“I know scores of artists who came here, and they all had some belief in the significance of the work they were doing,” Witt said by phone from Taos. “They have totally fallen in love with the land itself and all of its aspects. I’m one of them; I stayed and worked with people I believed in instead of climbing the career ladder.”

Many of the artists who moved to Taos kept a low profile, Witt said. “There are a number of people who are known, but only up to a point. They came here mostly to work, so their public persona is limited.”

Two exhibits currently showing at the Harwood give a glimpse into the lives of a couple of those artists: Ronald Davis and Leslie Crespin. Witt, who has been curator at the Harwood for more than 25 years, has spent decades studying and writing about the Modernists who worked in northern New Mexico.

“He is known for his geometric stuff and for art that defines space in quite amazing ways,” Witt said. “His ability at arranging things in relation to each other is phenomenal. But what we are showing is something that he’s not known for.”

Davis’ The Music Series 1983-1985 will come as a shock to people only familiar with the artist’s geometric paintings. The series is named after electronic music Davis composed while he was working on the paintings. “The music and painting were starting to influence each other,” Witt explained. “I haven’t heard the music. Maybe it’s as wild as the paintings.”

Artists at the heights of their careers do not usually start painting in a style borrowed from an icon of modern art, yet The Music Series openly borrows from Jackson Pollock. Davis said that in the early ’80s he felt that the foundation of modern painting was being ignored by the art world. “Pollock was so important that you have to think about him, but these guys weren’t,” Davis said by phone from his Arroyo Hondo studio. “It became urgent for me — nobody knows about Pollock anymore. It was up to me to rescue painting. It was a grandiose plan.”

Davis had studied Pollock’s work years before as an art student, but during the ’80s he reimmersed himself in Pollock, studying the paintings with the eye of a mature artist. At that time, Davis said, most people thought Pollock was washed up when he died, that he had painted himself into a corner and didn’t know what to do next. But Davis never believed that. He believed that an artist of Pollock’s genius would have found new and unexpected ways to redefine painting.

For two years, Davis poured and dripped acrylic paint made for animators onto canvas and paper. He worked in brilliant colors, often adding liquid mediums to make some layers translucent. He used metallic paints and pearlescent pigments to make other layers reflect light in unexpected ways. He poured matte paint next to glossy paint. There are about 200 works in The Music Series — 80 on canvas, the others on paper.

“What’s special about The Music Series is a kind of illusionistic space — even though they are organic,” Davis explained. “As many ways as there are to put paint on with a brush, there are probably even more ways to pour paint.”

BlumHelman Gallery in New York gave Davis a one-man show of The Music Series in 1984. Davis said he had grown accustomed to having his shows sell out and having his work reviewed in Artforum and Art in America. The reception The Music Series received shocked him.

“We were standing at 57th Street and Madison Avenue, getting ready to go to the opening, and Joe Helman said, ‘These are beautiful paintings, but they’re not in vogue.'” Few paintings sold, and the gallery shipped the others back to Davis right after the show closed. There were no reviews or notices.

The New York ’80s art scene was a roller-coaster ride for many artists, Davis included. But the silence Davis experienced after showing The Music Series left him shaken. He said he would have preferred a review calling the paintings stupid and derivative — any reaction would have been better than no reaction.

Today, Davis does not have a gallery, although he said he is negotiating with one and expects to be showing his work soon. He talks openly and without bitterness about his career, the art world, and the Malibu studio he used to own, which was designed by Frank Gehry. And, he’s excited that some of The Music Series is on display at the Harwood Museum.

“I was making a statement about the art of painting,” he added. “I always loved them [The Music Series], but the critics, the galleries, and the collectors were looking someplace else.”