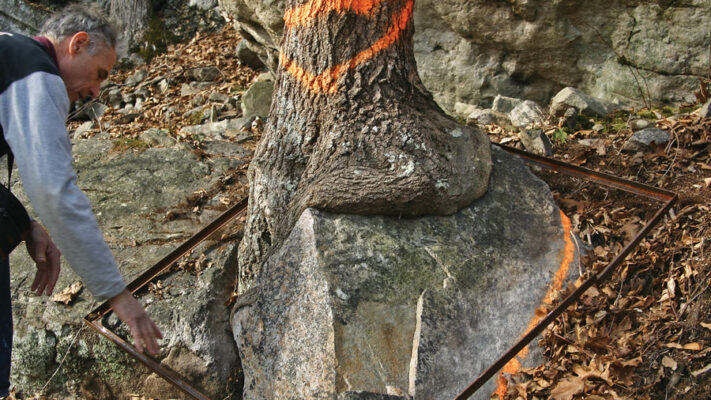 Embellishing the manicured landscape that surrounds the U.S. Geological Survey Building, in Reston, Virginia, an imposing metallic figure depicts a conglomeration of rocks and trees, leaning this way and that, yet bound together by nature’s timeless force. You might say the figure is a geologic survey in itself; it is a story told by natural elements found just below the Appalachian Trail in the woods of the Kittatinny Ridge in Sussex County, New Jersey. On the expansive government lawn in Virginia, the sculpture links the organic with the manmade, harmonizing the building’s natural setting with its horizontal geometry. The artist named this work “Harmony Ridge” for its role, and for the place from which it came.

As a young man, Robert Lobe sculpted wood, gravitating towards natural forms, exhibiting his work as early as 1969 at the Whitney Museum. He also liked cars, and with proceeds from a sale, acquired a 1958 Aston Martin, fitted with a 289 Ford Mustang engine and in dire need of bodywork. Taking on the task, Lobe got involved with how they made the car. Fancy automobiles—like Ferraris, Duesenbergs and Aston Martins—are made in far smaller quantities than Fords and Chevys. So few are made, in fact, that it doesn’t pay to set up for assembly line manufacture. The body of an Aston Martin is hammered out around a wooden form; each individually conformed to the shape, and then wheel-sanded to remove the marks from the power-hammer. On the inside, the thin, lightweight bodies are usually faced out with wood.

Fascinated with the process, Lobe went to the library and found an article in Popular Mechanics about dealing with dents through panel beating, a method evolved from an ancient metalworking technique known as repoussé. Lobe read about intricate old buildings in France that were constructed at their base with bricks and mortar, then higher with wood frames, faced out with stunning ornamentation in hammered copper. Malleable metals have been shaped and stretched with hammers since antiquity: Egyptian Pharaoh Tutankhamen’s mummy mask was fashioned from a single sheet of gold, hammered and inlaid with gems in 1330 BC. A larger and more familiar example is the Statue of Liberty, formed by copper repoussé, using wooden structures to shape each section during the hammering process.

Somewhere between King Tut and Lady Liberty, Lobe found his niche. He began to hammer aluminum around rocks blasted from the ground at the construction site of the World Trade Center and was excited by the capacity to capture the astounding interplay of surfaces, shapes, and textures created in these natural forms. His first, relatively small-scale sculptures were shown in 1976, but as his ideas grew more ambitious, finding places to express them became a challenge. His wife Kathy’s family had a summer home on Culver Lake, in Sussex County, that they visited on weekends from the city, so Bob knew about remote locations like Stokes Forest. But it’s an invasive process, bringing sheets of aluminum into the woods and pounding the metal to conform to huge boulders and trees. Lobe got himself kicked out of Stokes and other locations, so he began poking around the “neighborhood”, looking for a place to work.

In 1963, Ed and Doris Risdon bought 160 acres northeast of Culver Lake, backed up to the Kittatinny Ridge where it runs through the Sunrise Mountain section of Stokes Forest. They built a campground there, which they opened in the summer of 1966 and named Harmony Ridge Campground. “We came up here and found Ed and described what I do. He caught on and got all excited,” Bob Lobe recalls. “He took me around the woods at the base of the cliff at the top of the hill and showed me all this great stuff and told me to do whatever I want. This was in 1983.”

Since then, for nearly forty years, Lobe has come to create sculpture from the remote forest models at Harmony Ridge. Here, at the base of the final vertical rise to the top of the ridge, huge boulders have cracked away from the cliff, resting where they have lain for thousands of years. Season to season, the forest ebbs and flows around the rock, gaining footholds wherever possible, each member rising and falling, generation to generation. For an artist walking in these woods, the earth gushes a torrent of shapes and forms, angles and curves, textures and light, all vibrantly alive, yet frozen in a rhythm of life far different than our own.

Lobe started employing pneumatic tools in 1985, hauling an air compressor up the hill to facilitate stretching and shrinking the metal, encapsulating landscape. “Most of the work is setting up; the actual tooling goes very rapidly,” Lobe explains. “I know what’s going to happen. It’s like dress making.” With the hammer, he gathers the metal around the form, adding texture, which expands the surface area of the aluminum sheet.

Bob’s most recent solo exhibition is an installation of three pieces at Prospect Park in Brooklyn, all modeled and conceived at Harmony Ridge. He describes how one sculpture, Invisible Earth, came to be. “I noticed this tree leaning against boulder, and it had exposed root structure. It was very animated, about to tip over. There was lots of potential energy: a pregnant situation. I see something like that, and I might not come back to it for ten years. Time flies! I came back and put some time into this one and found an idea about how to develop it. What brought it together for me was another tree that had fallen nearby, which I brought over, and it gave context and a narrative. I had to get to the bottom of the tree, so I pulled the rock away. The tree fell down within a week, and I could do the bottom of the roots. This is an aggressive structure and has heat treatment as well as interior members, an aluminum bridge and flanges inside. All told it was probably about a year’s worth of work. Once I had Prospect Park venue and funding, three large pieces came together at once.”

After countless mallet strikes, when Lobe is finished attaching and sculpting the sheets of aluminum to the form and texture of his model, the task of cutting the piece away for relocation begins, first to his Newark studio where he will stitch the sheets back together, sometimes revealing the joints, seams and bolts comprising the sculpture’s mechanical construction. Each piece must be transported again for heat treatment, in order to stabilize and strengthen the structure. Individual sections, welded together, must fit into a 5 x 5 x 6 foot oven where they are baked at 985 degrees for one hour, then quenched in cold water. The aluminum softens and becomes extremely bendable, and Lobe immediately returns to the factory and reassembles the entire sculpture. As the hours progress, the metal gets more difficult to bend until, by the end of the day, it becomes unworkable. To achieve the ultimate hardness, the sculpture is dismantled yet again, but this time into larger sections to fit into another oven, 6 x 6 x 12 feet at 350 degrees for twelve hours. At last the sculpture is brought back to the studio or place of exhibition for final assembly. The use of pneumatic tools and aeronautic metallurgy are a hi-tech twist to the ancient art of repoussé, uniquely employed by the sculptor to reinvent nature.

Lobe’s exhibition at Prospect Park, the installation for which the GMC Corporation lent vehicles and funding, is the latest of dozens of solo exhibitions across the country, dating to 1974. His work can be seen in numerous public collections, most notably the Solomon R. Guggenheim Museum and Whitney Museum of American Art, both in New York City; the National Gallery, Washington, D.C.; the Cleveland Museum of Art, OH; the Museum of Contemporary Art, Los Angeles, CA; the Museum of Fine Arts, Houston, TX; and the Walker Art Center, Minneapolis, MN. No less than seventy-five Robert Lobe sculptures come from the Kittatinny woods at Harmony Ridge, where there is always a finished piece on view at the campground for visitors to appreciate. And you can always find the models for those and future work—on permanent display, up the hill, way back in the woods.