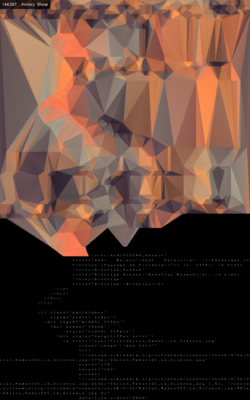 Using software processes of his own design, Jason Salavon generates and reconfigures masses of communal material in an effort to present new perspectives on the familiar. His projects unearth unexpected pattern while exploring the relationship between the part and the whole or the individual and the group. Reflecting a natural attraction to popular culture and the day-to-day, his work regularly incorporates the use of common references and source material. The final compositions are exhibited as art objects, such as photographic prints and video installations, while others exist in a real-time software context.

Born in Indiana, raised in Texas, and based in Chicago, Salavon earned his MFA at The School of the Art Institute of Chicago and his BA from The University of Texas at Austin.

His work has been shown in museums and galleries around the world. Reviews of his exhibitions have been included in such publications as Artforum, Art in America, The New York Times, and The Wall Street Journal. Examples of his artwork are included in numerous prominent public and private collections. He is currently an Assistant Professor of Art, and faculty in the Computation Institute, at the University of Chicago. He was also employed for numerous years as an artist and programmer in the video game industry.