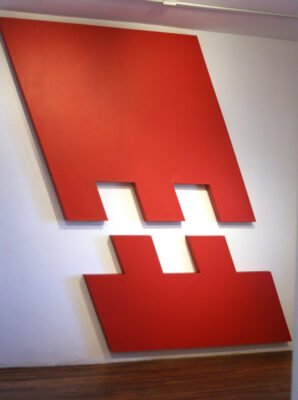 There is about Ronald Davis, the man and his work, a paradox.

For over four decades he has, in his many expressions, both two and three-dimensional, straddled an aesthetic and artistic divide between abstraction and representation, sculpture and painting, conceptualism and traditional object-making.

Davis announced himself with authority in the mid-‘60s, straight out of the San Francisco Art Institute, with paintings made of molded polyester resin and fiberglass. They were the Perfect Thing at the Perfect Time. The geometric-shaped, illusionary works in vivid, virtuosic color combinations, depicted rectangular forms in perspective. They floated in the indeterminate space as physical entities, shifting from two to three dimensions and back again. Somehow, they seemed to resolve Frank Stella’s post-Abstract Expressionist conceit of painting-as-object with Ucello’s early Renaissance perspective that embraced the history of painting stretching back half a millennium.

Davis’s ingenious escape from the canvas and two dimensions demonstrated the painting as the illusion of an object, and an object that was the illusion of a painting. A neat little trick that Marcel Duchamp had pulled off several decades earlier. (It is notable that we are now as far removed from that ‘60s moment in Davis’s artistic career as Davis was then removed from Duchamp’s revolutionary impact in the ‘20s.)

In contrast, the un-Perfect thing at the un-Perfect time was his early ‘80s “Music Series” — large splatter paintings that were a response and homage to Jackson Pollock, at a time when Pollock was as relevant and happening as, say, figurative painting. The random rightness of the jazzy, wildly colored canvases did create a visual music that swung hard, and reminded us that, as someone once said (was it Terry Southern?): “Any fool can drip paint, but how many have the when/where to stop it?”

At around the same time Davis was riffing on Pollock in old-fashioned paint on canvas, he started using the computer to summon visions from the early virtual world. He has been playing with computer-generated graphics and printers ever since.

For the past couple of years Davis has been rendering images — mostly geometric abstractions, a coffee cup, strange “spaces,” portraits of U.S. presidents as framed portraits in a gallery room setting — on his computer screen using a high-end three-dimensional program. These images are then uploaded to Imagewizards, Inc. in North Carolina (brought to Davis’s attention via a serendipitous “spam” e-mail) that prints them by transfer process onto sheets of brushed or high-gloss anodized aluminum of variable size. The resulting image-objects are confusing, subversive, paradoxical.

Since the early ‘90s Davis has lived reclusively in a cluster of six separate modest-sized structures out at the end of a road very near the melodramatic Rio Grande Gorge in Arroyo Hondo, New Mexico.

“It’s nice to live next to a crack,” he remarks offhand, inscrutably.

Standing before the reflective sheen and mesmerizing color combinations of “Five Block Row,” 2006 (borrowed from his 1972 painting), the question immediately arises: What is it?

“I’ll sit down and talk technical stuff and Craft 101 with people all day if they want, but…” Pause. “There’s an element of a beer sign about it, don’t you think?”

“This woman came to interview me in Malibu once,” he recalls. “She was doing a biography of Clement Greenberg. I was showing her one of my digital pieces on-screen and she asked me, ‘Is that a photograph, or a painting?’ When I told her what it was (a 3D computer rendering) she said, ‘That’s horrifying!’ I couldn’t believe it. So I asked her — ‘You’re a writer, right? Do you use a word processor? I use a graphic processor.’ ‘It’s not the same,’ she said. Why not? Why is something done with a stick with hair on the end of it, better, or not? I don’t get it.”

Appraising the portraits-within-portraits of Harry Truman and George Washington the Pop Art hit is inescapable.

Why not, indeed? Just the sort of paradox Davis has posed with his visual rhetoric for over four decades.

“I’m just doing what’s interesting at the moment. And I see how long that moment can last, how far the parameters can extend.”

“It’s either without thought or effort, or it’s all you think about. One of the two.”

Tom Collins is a writer based in northern New Mexico. He has written about art and artists for more than 25 years. He also writes about literature, politics, sports and history.