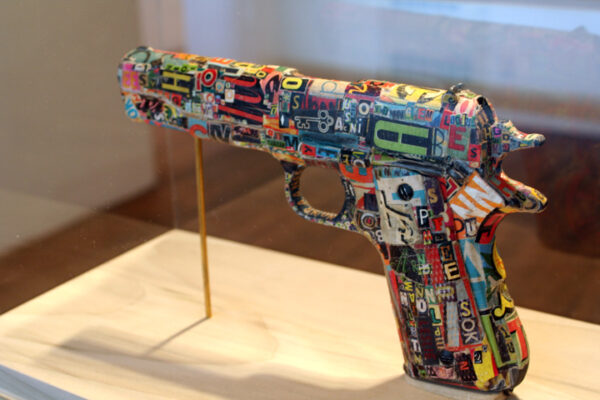 An array of colorful paper strips cheerfully swathes the rustic, mechanical frame of a 9mm gun. Only the tip and trigger of the weapon remains uncovered to remind viewers that although the object is given a lighthearted aesthetic, it is not a toy.

From this gun to a neon-green bike decorated with geometric paper cutouts to a paper collage of a boy slumped in a chair, Austin artist Lance Letscher playfully presents the juxtaposition of human emotion and machine in his new exhibition, “The Perfect Machine.”

The exhibit features collages of objects in conjunction with the publication of the artist’s first children’s book of the same name. The book is set to release in September, and the exhibit is ongoing at D Berman Gallery until May 15.

Letscher said part of the reason he wanted to write “The Perfect Machine” was because he felt children today are required to use their imagination less.

“They watch TV, and they really don’t have to imagine anything,” he said. “All the pictures are already there. Imagination is just no longer engaged the same way as before.”

The notion of putting imagination into play resonates throughout “The Perfect Machine” –a story about a boy’s journey to create what he thinks is the perfect machine.

The outline of the story only took a couple of days to draft, Letscher said. But the production became a never-ending spiral of creativity where artwork would point to more stories, and more stories would lead to more creation.

And though “The Perfect Machine” is finished, Letscher does not halt his artistic drive. Instead, he streams his ideas onto his next project.

“I keep going on with it, and I try not to evaluate or be too conscious in steering myself,” he said.

Letscher, soft-spoken and shy, remains humble when talking about the growing popularity of his collage work and the six personal shows he has this year, including one in Barcelona, Spain, and another in Madrid.

Letscher’s first fond memories of art were wandering around the old art building’s halls while his mother was taking art classes at UT.

“My mother was the one [who] encouraged me, got be started, showed me art books, told me about people and told me how to do things,” Letscher said.

It wasn’t long before he found himself on old, familiar grounds. Letscher graduated from UT with a bachelor’s in fine arts and then beat out 70 applicants to be the only graduate student in the painting department of his class.

Though he has a painting background, Letscher’s first works were realistic woodcarvings. He said the way he used to draw was to look at something and draw it accurately instead of by memory or using his imagination.  He translated this skill into a traditional woodcarving technique.

Shortly thereafter, though, Letscher found himself at a dead end.

His carvings were taking too much time, the materials were too expensive and his large sculptures were difficult to move—all of which made it hard from him to get into art shows.

Letscher soon started to make simple drawings at night and then cut the drawings up and glue them back together to achieve a sense of depth.

Since those nights, he has continually been making paper collages ranging from 3 inches by 5 inches to 9 feet by 14 feet, using X-acto knives and rulers to make precise cuts and wallpaper glue to intricately paste his papers together.

“I go through a lot of paper,” he said. “There was a time in my life when I would go salvage things, get things out of the dumpster, try to find things, but now I have to streamline.”

Letscher said because he is booking more shows, he doesn’t have time to go out and find papers.

Over the years, though, Letscher has accumulated 100 cubic feet of paper, which amounts to the size of a Toyota Prius. Some of the papers are from his days of rummaging through Half Price Books’ dumpsters, others are bought and some are given to him by family and friends.

Though he has collected a mass amount of supplies, he said he does not keep the papers organized and frequently rummages through a pile for inspiration.

“I have to go look for things because then, I see things I didn’t think of,” he said. “I see things that make me think of other things. The process of constantly going through my inventory keeps it fresher. Things don’t get stuck.”

Letscher said creating is the most important thing to him. He said even though he does have a lot of shows and has to make a lot of pieces, he doesn’t want to just produce work. He wants to create it.