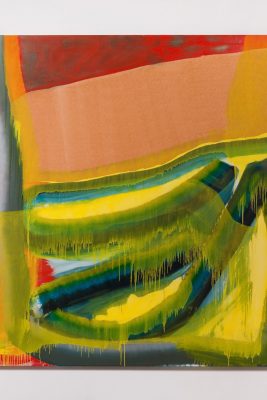 This past weekend Los Angeles provided a welcome escape for Polar Vortex-plagued art lovers: Starting Thursday, there wasn’t just one, not two, but three fairs taking place all over town. Things kicked off with the independent two-day Paramount Ranch fair, held for the first time at the Malibu hills movie set where Paramount used to shoot its Westerns. Thirty-two young, international galleries (like Balice Hertling from Paris, or Federico Vavassori from Milan) and artist-run projects (such as New York’s Artists Space, or M/L Artspace, by Marie Karlberg and Lena Henke) took over different buildings on the open air set, staging exhibitions at the Barbershop, the Saloon, the Sheriff’s Station respectively. The setting provided a refreshing challenge for some of the exhibitors, but the atmosphere was fun and family like, with some bold-faced collectors and artists seen getting their shoes dusty while browsing the “booths.”

Somewhat more conventionally, the fifth annual Art Los Angeles Contemporary fair — or ALAC for short — was held at the Barker Hangar at the Santa Monica Airport, attracting more than 70 international, and mostly younger galleries, including, Peres Projects from Berlin, Standard from Oslo, Yautepec from Mexico City, or Joe Sheftel and Zach Feuerfrom New York, as well as L.A. art world darlings such as Susanne Vielmetter and M+B Art, and the young Hannah Hoffmann. Judging from the wares on offer at ACLA, the typical Angeleno collector has a strong propensity for vivid colors and abstraction.

The real record breaker, at least in number of visitors, was Printed Matter’s second annual L.A. Art Book Fair, which was held at MOCA’s temporary outpost in Downtown L.A.’s Little Tokyo district. Some 250 international presses, booksellers, antiquarians, artists, and independent publishers lured in more than 20,000 visitors. In addition to books, exhibitors are increasingly selling small editions, posters, and other sought-after (and pricier) artists’ “paraphernalia,” leading some of the art galleries at the other two fairs to consider hitching their carts to this one instead. Adding to the Downtown appeal was the recent opening of the ACE Hotel in the grand old United Artists theatre building on Broadway. The 175 guest rooms were designed by Roman Alonso of Commune (including frescos in the lobby by the Haas Brothers) as were the busy restaurant and rooftop bar. The building’s spectacular 1927 theatre is also going to officially re-open on February 14thwith a (sold-out—sorry!) concert by Spiritualized. But a select few already got a sneak peak at the space last Saturday for a private panel discussion and dinner Hans Ulrich Obrist organized with the artists John Baldessari and Meg Cranston.