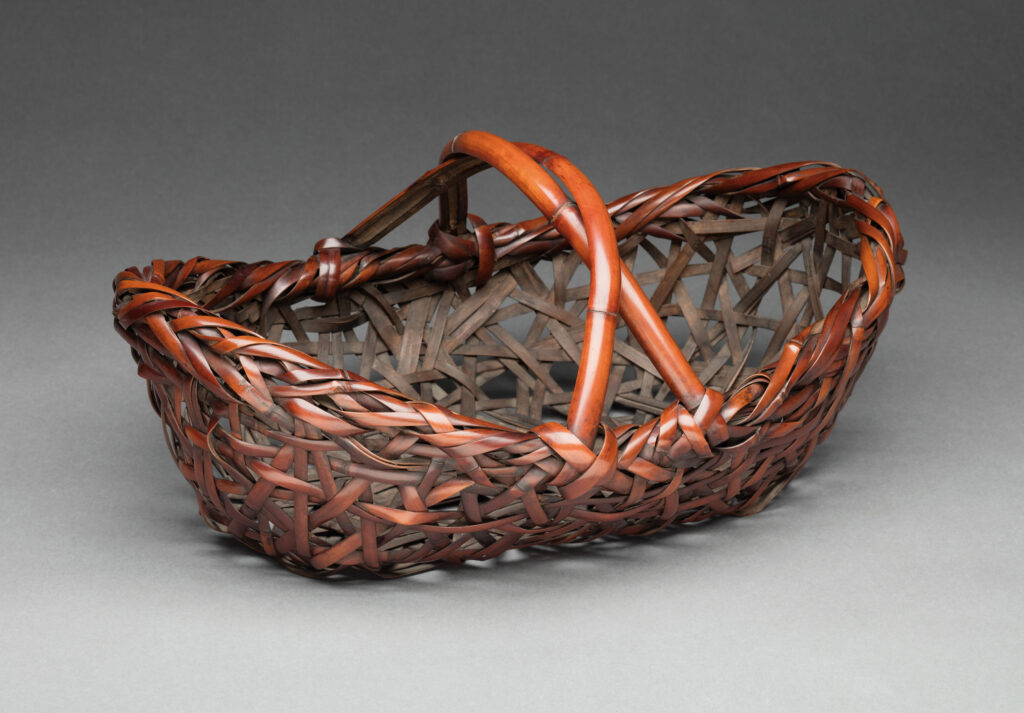 The founder of the Wada lineage was born into a basketmaking family during the late Edo period. His given name was Ichimatsu. The family lived near the Sumiyoshi Grand Shrine, and his father made functional bamboo baskets which he sold at his shop near the main gate. Business must have been good, as his father was later described as an influential man about town. Ichimatsu began learning the family trade at a young age.

The Grand Shrine attracted many visitors, including prominent members of the Japanese literati. One day, a group of these visitors suggested that Ichimatsu try his hand at making a karamono basket for sencha tea ceremony.

A key feature of a karamono-style basket is the sophisticated use of rattan details. According to a 1960 interview with Wada Waichisai III, though Ichimatsu had mastered the skills to make functional baskets, he still needed to learn fine rattan knotting and wrapping techniques. One of his supporters introduced Ichimatsu to Hayakawa Shokosai I, who had studied rattan-plaiting before switching to bamboo. Ichimatsu learned the necessary rattan techniques from Shokosai and reciprocated by passing along certain bamboo handling techniques. Wada’s training also took him to a dye shop in Sakai City, where he learned the most effective ways to dye his finely crafted baskets.

Ichimatsu must have been greatly motivated when he learned that Shokosai I had won the Phoenix Medal at the very first Domestic Industrial Exhibition in 1877. Shokosai’s prize-winning tea ceremony box was acquired by the Empress of Japan, a pivotal moment for the formal recognition of bamboo as an art form. Ichimatsu also began submitting work to these prestigious national exhibitions. In 1881, at the age of 30, he won an award at the second Domestic Industrial Exhibition, establishing him as a peer and rival of Shokosai I. In 1891, with the founding of the Osaka division of the Japan Art Association, Ichimatsu and Shokosai I were named master-instructors in bamboo art. In 1894, the chief priest of Sumiyoshi Grand Shrine gifted the Emperor with an impressive offering tray by Wada. A former regent, Prince Konoe Tadahiro, was so impressed by Ichimatsu’s tray that he bestowed on him the artist’s name “Waichisai” (first in Japan). A year later, he won another award at the fourth Domestic Industrial Exhibition, which cemented his position as a leader of this art form.

Known as a master of the bunjin (literati) style basket, Waichisai I was highly acclaimed by his contemporaries for his technical skills. But because there are so few confirmed examples of his baskets, assessing his artistic style is difficult. One work — a late-career, boat-shaped basket, created entirely from roughly-woven susutake (old smoked bamboo) and completely devoid of rattan decorative elements — demonstrates a departure from the literati style he was known for and an evolution in his creative artistry. This departure suggests that Waichisai I had a deep understanding of the beauty and texture of bamboo.

Not only was he a master artist, Waichisai I made a name for himself as a teacher as well. His students and mentees included Wada Waichisai II, Tanabe Chikuunsai I, Yamashita Kochikusai, Yamamoto Chikuryosai I, and Maeda Chikubosai I, many of whom established their own successful sub-lineages.