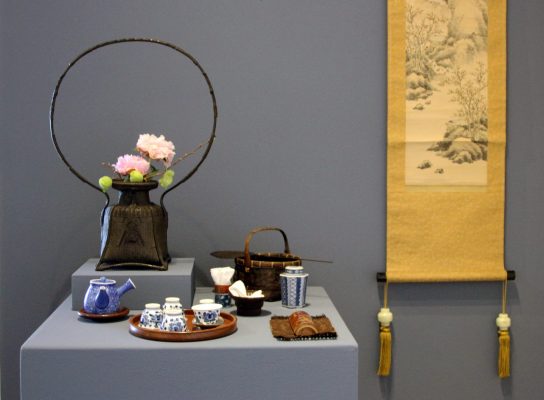 In 1404, during the reign of the 3rd Shogun Ashikaga Yoshimitsu (1358-1408), a trade relationship was established with China’s Ming Dynasty. As a result, large quantities of Chinese art were imported into Japan, setting off a prevailing fashion for Chinese art appreciation and connoisseurship among the Japanese elite.

Included among these treasured objects, known as karamono (Chinese things), were impeccably crafted, stately bamboo baskets decorated with elaborate rattan wrapping and knotting. These imported baskets were valued by collectors and connoisseurs not for their functional or ritual utility, but as objects of beauty. They were often displayed with a flowering tree branch selected to compliment the dark, formal form of the basket.

This connoisseurship and presentation of objects eventually became standardized by a group of men known as doboshu — servants to the shogun and other high-ranking nobles who were professional men of taste and artistic discrimination. Their duties included the preparation and supervision of important social events, with a particular focus on the curation and arrangement of objects. Beyond establishing the aesthetic standards of the day, the doboshu played an important role in the development of the Japanese tea ceremony.

During the Muromachi (1336-1573) and Momoyama (1568-1600) periods, Chinese bamboo baskets would have continued to be featured with elaborate, vertical flower arrangements as part of an opulent presentation of art objects. However, a new, more austere aesthetic was beginning to emerge. This new style was epitomized by Sen no Rikyu (1522-1591), the famous proponent of the wabi tea ceremony. While formal “standing” flower arrangements continued to be used for ceremonial and public occasions, toss-in style arrangements reigned in small, private tearooms throughout Japan. These freer, more rustic arrangements, composed most often of wildflowers, were presented in roughly woven baskets or undecorated earthenware vases.

With the establishment of many tea schools patterned on his ideals, Rikyu’s philosophy came to define tea ceremony for most people, and he had a profound influence on many branches of Japanese art and expanded the sense of what made a basket beautiful. Despite Rikyu’s embrace of rustic baskets, there was no increase in appreciation for Japanese-made folk baskets. Only if such a basket was used by Rikyu or one of his successors, was it considered beautiful and appropriate for use in tea ceremonies. However, the popularization of wabi style did have an enormous impact on the imported basket market. Beginning in Rikyu’s time, tea masters and practitioners sought out simple baskets from rural China and Southeast Asia. Regardless of stylistic difference and place of origin, these baskets were all referred to in Japan as karamono (Chinese things).

About 100 years later, during the mid-Edo period (1603-1867), another major shift occurred regarding the tea ceremony — the introduction of the sencha (infused tea) ceremony. This antithesis to wabi tea ceremony was spread by the Zen monk Baisao (1675-1763) and gained strong support among Japanese free thinkers of the time. Based on the philosophy and method of drinking brewed tea leaves developed by the Chinese literati of the Ming Dynasty, senchado stood in opposition to the formal hierarchies of the matcha- (powdered tea) based chanoyu and accompanying cultural values.

Formal karamono baskets were incorporated into sencha gatherings of the Japanese literati. They were typically displayed with seasonal flowers, plants and other natural objects complementary to the theme of each event. Towards the end of the Edo period and during the Meiji period (1868-1912) the sencha tea ceremony flourished.

During the Edo period, due to the isolationist trade policies enforced by the Tokugawa Shogunate, genuine Chinese imports were in short supply. Even after the Meiji government opened trade relationships with other nations, years of turmoil and economic decline meant that Chinese craftsmen were no longer creating expensive, intricate bamboo baskets. So, in response to the demand for karamono baskets, particularly by senchado practitioners, highly skilled Japanese basket makers began to replicate earlier examples of Chinese baskets down to the minutest detail.

Japan is about as far north as most species of bamboo can grow. Consequently, Japanese bamboo tends to be stiffer in comparison to that which grows in regions further south. Recreating the intricate forms of antique Chinese baskets with a material that behaved differently was extremely difficult, forcing Japanese bamboo artisans to raise their skills dramatically. They also began using the flexible skin of the rattan plant for delicate decorative elements, which were a hallmark of karamono baskets. However, since rattan is not indigenous to Japan, importing this exotic climbing palm from Southeast Asia increased the cost of the baskets considerably. Despite their imitative nature, the karamono baskets being created by master craftsmen in the Edo and Meiji periods were in no way cheap copies of the early Chinese baskets.