The island of Kyushu is home to one of Japan’s last remaining bamboo weaving communities where craftsmen and craftswomen transform giant grass into beautiful accessories and homeware.

The city of Beppu on the east coast of Oita Prefecture is well known throughout Japan, but it means different things to different people. To hot spring enthusiasts, it’s the home of dozens of onsen, whereas for connoisseurs of traditional crafts, the name “Beppu” is synonymous with woven bamboo products of the highest quality. And though it might not be readily apparent, there’s a connection between Beppu’s baths and bamboo baskets.

Beppu prides itself on having the highest output of thermal water in all of Japan: an estimated 137 million litres per day. Japanese have been coming to soak in the region’s bubbling pools for over a millennium, and throughout that time, they’ve been buying baskets in which to steam their food and store their belongings, creating an enduring demand for woven bamboo products.

Combine that demand with supply − Oita is rich in madake, a variety of bamboo especially well-suited to weaving − and you can understand why bamboo crafts have long flourished here. In fact, the city is home to the country’s one and only government-run school for bamboo weaving.

The Oita Prefectural Bamboo Craft Training Centre is where nearly all of Beppu’s weavers get their start. “There are a few other bamboo weaving schools in Japan,” says its director, Takanobu Takada, “but they’re private schools, and they’ll cost you a million yen per year (about 7,500 euros) or more in tuition. Here the students only need to pay for their uniforms and the teaching materials.”

The course is limited to 12 new students per year, but they don’t have to be from Beppu or even from Oita; anybody is welcome to apply − including foreigners − provided he or she has strong enough Japanese language skills. 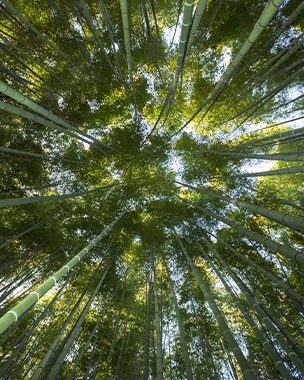 A bamboo grove in Beppu. 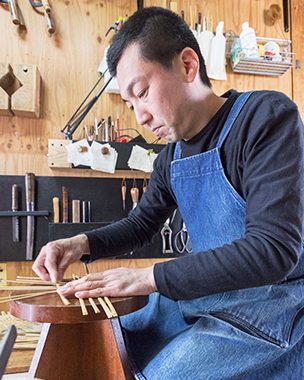 Shigeomi Ohashi weaves lampshades.
On a brisk, sunny morning, the first-year students are all kneeling or sitting cross-legged on the school’s hardwood floor, each of them surrounded by the essentials: a metal basin full of water in which to soak the bamboo, an assortment of cutting implements, a plentiful supply of bamboo, and a wooden workbench so small that it almost seems superfluous. They range in age from their early twenties to their late thirties, about half male and half female, about half from Oita Prefecture and the rest from across Japan.They’re all working on the same chunky basket, practicing the basics of splitting the bamboo again and again to get thin strips and then weaving the strips into the most elementary patterns. More complex patterns will have to wait until the latter half of their two-year course of study.Bamboo lampshadesAbout a kilometre to the north of the Training Centre in a quiet residential neighbourhood sits the workshop of Shigeomi Ohashi. Watching him weave a basket in this undeniably cramped room, it’s hard to imagine him standing on a ladder near the ceiling of the vast MGM Grand Hotel in Las Vegas, working on bamboo light fixtures four metres across. Nonetheless, that’s one of the large-scale international projects in his portfolio, along with installations in a department store in Kuala Lumpur and a tall bamboo model of the communications tower in Tokyo known as SkyTree.It wasn’t so long ago that nearly everybody in Japan could work with bamboo to some degree, he points out.

“It was just one of the skills that you learned as you grew up, like cultivating rice. There was no need for anything like the Training Centre; you learned from your parents and grandparents.

“But then plastic came along, and bamboo started to disappear from our lives. Fortunately, it’s enjoying a bit of a renaissance. When I applied to the Training Centre, almost anyone could get in, but now there’s about three applicants for every opening,” Ohashi says.

If Shigeomi Ohashi has gone big, Mikiko Sato has gone small. A native of Beppu who graduated from the Training Centre, Sato now runs her own shop, Cotake, not far north of the city’s central train station. She specialises in jewellery, but there are no gemstones or precious metals to be seen in Cotake, for this is bamboo jewellery. Sitting on a raised workspace at one end of the shop, she splits the bamboo repeatedly until its thickness can be measured in fractions of a millimetre, using blades that are nothing short of terrifying. 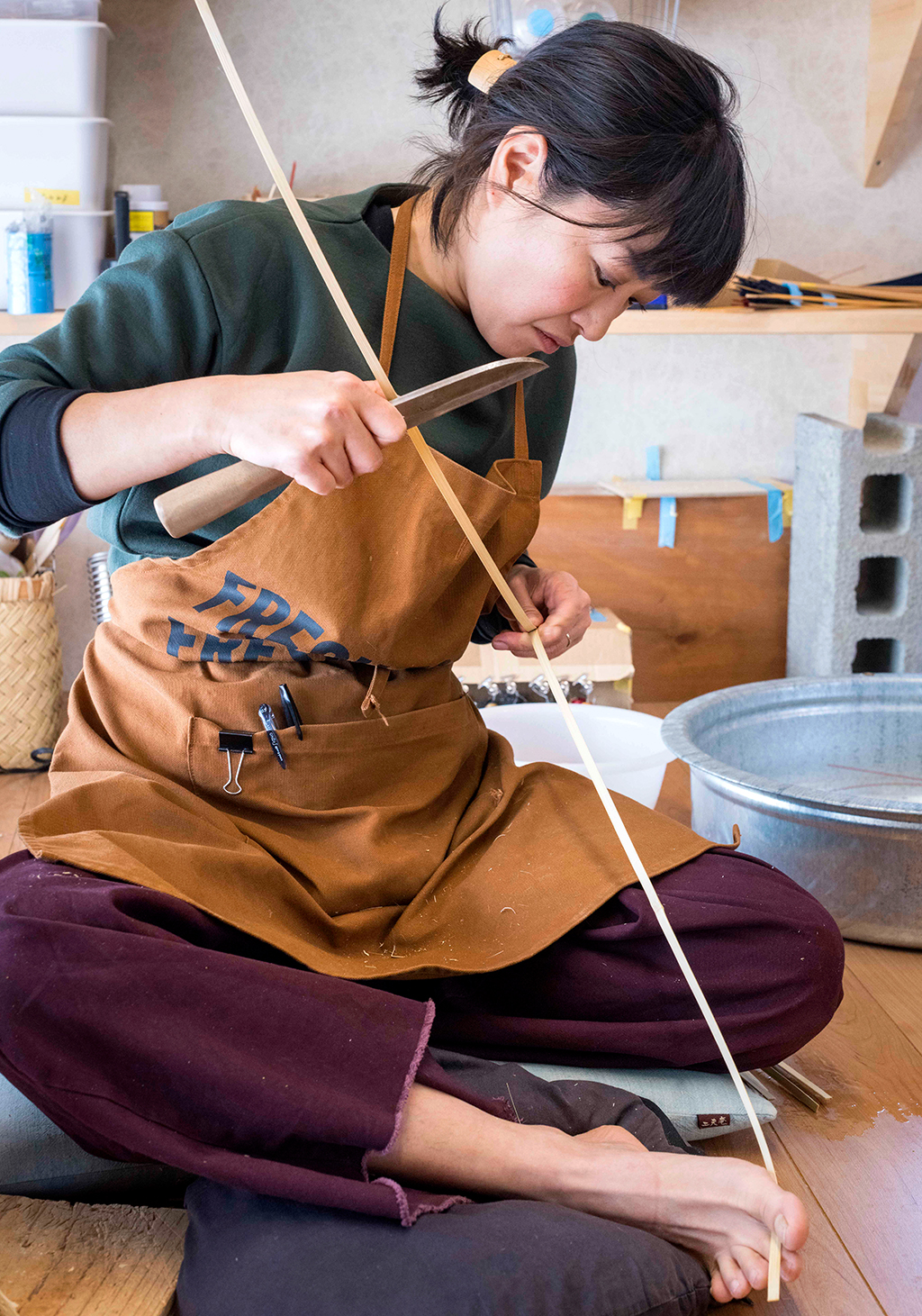 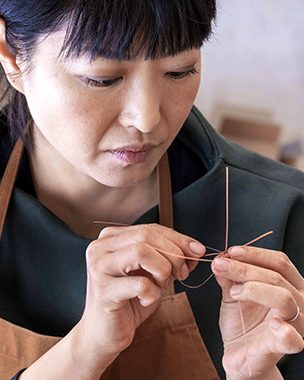 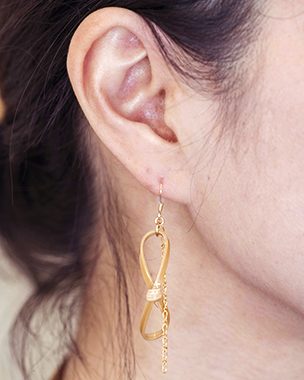 Split bamboo makes perfect little earring orbs.“I was a chef in a Japanese restaurant before I studied bamboo weaving,” she reassures visitors, “so I’m used to slicing things.”“It’s difficult to learn to split bamboo consistently,” she says, gripping one end of the narrow strips with her bare toes while her fingers work on the other end. When she finally has finished splitting, it’s weaving time: holding the fine bamboo strands up near her face, she carefully threads them in and out, in and out, until she has created a perfect little orb, no larger than her thumbnail, destined to become an earring. Brooches, bracelets, and necklaces are among her other specialties.Bamboo Legos?Hajime Nakatomi’s workshop is old school−literally. He rents one of the former classrooms in what was once a junior high school, a little south of Beppu in the town of Taketa, where − as in much of Japan − the population of school-aged children is dropping so quickly that some schools are being repurposed or just plain demolished. Before he moved to the school, his workshop was in a Buddhist temple that had fallen into disuse! 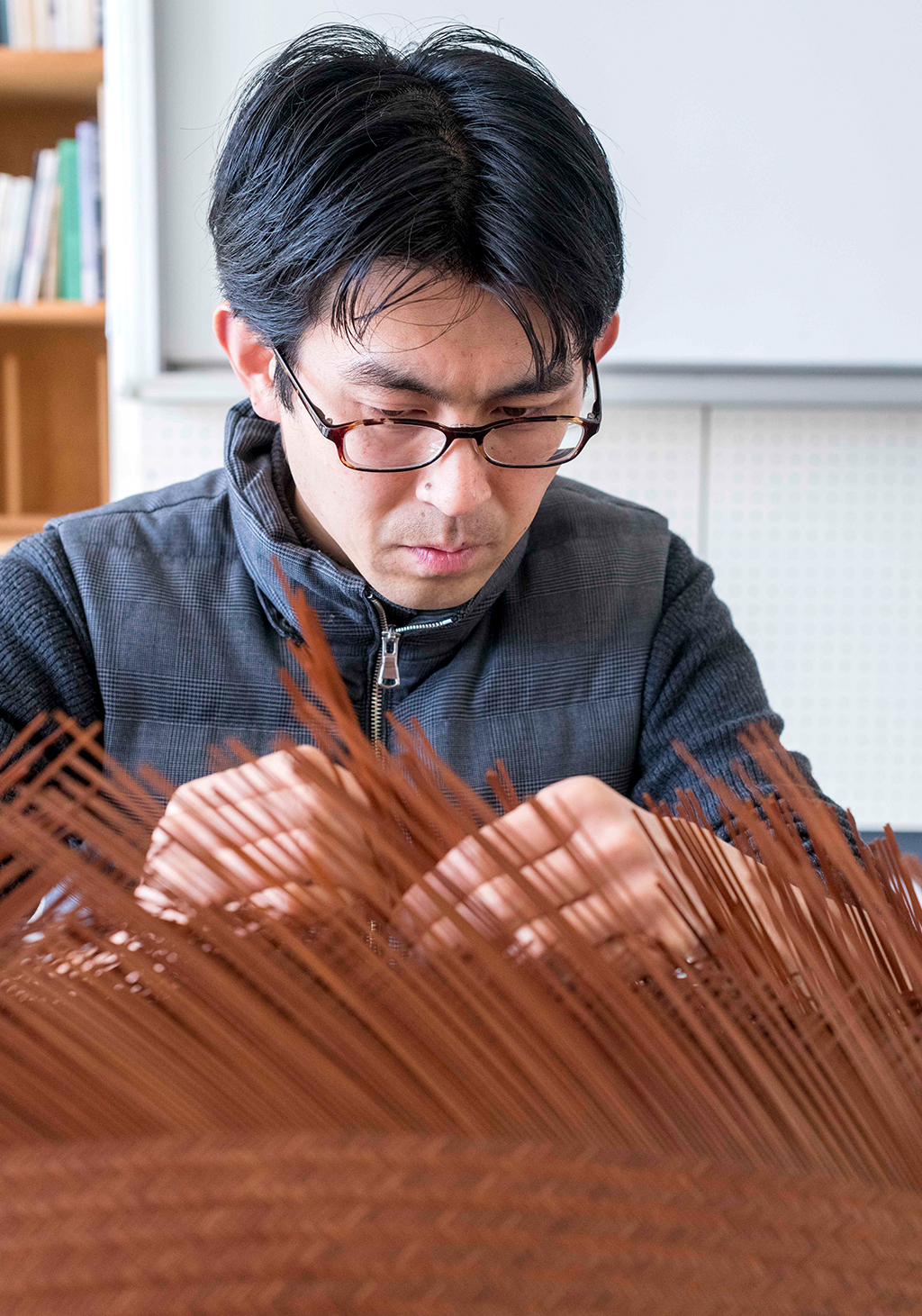 Nakatomi comes from Osaka and studied business during his university years in Tokyo. He applied to the Bamboo Craft Training Centre because he wanted a profession that he could pursue for the rest of his life, with no fear of layoffs or forced retirement. He did pottery while attending university but says, “Pottery is like photography; anybody can get into it. Becoming a professional basket weaver is harder than becoming a professional potter, and that higher hurdle means less competition.”

In addition to elaborate baskets, Nakatomi also makes abstract, decorative objects, many of which he sells through a gallery in the US. But perhaps his most intriguing product, developed together with Shigeomi Ohashi, is a toy called Tenta: small, simple bamboo triangles which can be combined into countless shapes and patterns − as versatile as Legos but made of natural materials, not plastic.