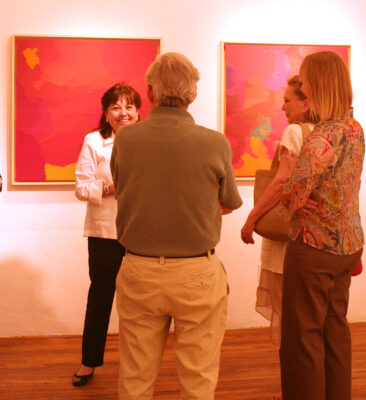 SANTA FE, NEW MEXICO — Eight Modern is pleased to announce its upcoming exhibition, Ramona Sakiestewa: Vortex of Color.
Long celebrated for her tapestries and works on paper, Sakiestewa is a central figure among contemporary Native American artists because of her seamless synthesis of abstraction with ritual imagery and ancient techniques.

Sakiestewa’s weavings show her exceptional mastery of the art, including her famed layering and blending of color, which give her tapestries what the artist describes as “a painterly quality.”

“I’m interested in the whole idea of layered color, when you look at a color and it’s not just one color, it’s an assemblage of molecules of color,” Sakiestewa said. “It’s like looking at color under a microscope. The simpler it seems, the more complex it becomes.”

Sakiestewa was born of Hopi ancestry and was raised in the Southwest. In addition to Native American influences, Sakiestewa’s work is also informed by the cultures of Japan and Latin America. A recent inductee into the New Mexico Women’s Hall of Fame, Sakiestewa has chaired the New Mexico Arts Commission, is a founding member and former director of Atlatl, a Native Arts organization, was the first Native American director of the Southwestern Association on Indian Affairs and continues to influence state and federal arts policies.

She has also made drawings, watercolors, clay prints and woodblock prints, in addition to extensive work as a design consultant. Her public art and design projects include the National Mall facility of the National Museum of the American Indian, the Tempe Center for the Performing Arts in Arizona, the America West Heritage Center in Utah and the Chickasaw Cultural Center in Oklahoma. Sakiestewa has received numerous awards, including the New Mexico Governor’s Award for Excellence in the Arts, the Governor’s Award for Outstanding New Mexico Women and several first-place prizes for Contemporary Weaving at Santa Fe Indian Market.

The artist’s work has been exhibited extensively in America and abroad and is held in the collections of numerous public institutions, including the Heard Museum, the Smithsonian Institution, the New Mexico Museum of Art and the Denver Art Museum. 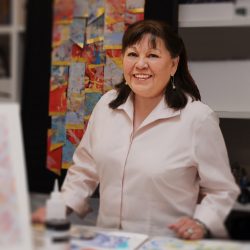