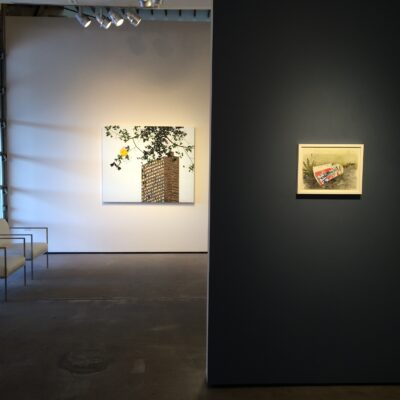 If Cubism allowed us to break into pieces the complexities of the world and lay them out in two dimensions, we might view painter Erik Benson’s collaged acrylic paintings in similar terms. Instead of smashing things to pieces, Benson’s work begins as deconstructions,reconstructed. The artist’s paint-as-collage process grew from a simple misfortune—an allergy to oil paint—and the subsequent need to find a new way forward. Next was the discovery of dried drops of paint on the floor, which he peeled off and used to collage. From this resourceful beginning, Benson’s practice has grown mature and methodical: he paints acrylics onto sheets of glass, allows the paint to dry to a point of elasticity, and carefully cuts the shapes he then collages onto canvas.

His images almost exclusively deal with the mise-en-scène of the urban environment. Housing projects, office buildings, nonspecific cement walls, and otherwise marginal places comprise the scenes in Urban Americana, his recent exhibition at TAI Modern (through October 4). Most of these subjects are eyesores that stand somewhere between cold anonymity and desperate stabs at reinvention. Similarly, they also stand somewhere between the manufactured or constructed and the incidental effects of natural decay and happenstance. While it would be easy to write them off as glorifications of urban blight, these paintings dive deeper under the surface and provide a nuanced starting point in thinking about the city that neither glorifies nor deplores the difficulties of urban decay.

Each building stands alone in a gray, unforgiving sky. In no title (Knit Bomb) (2015), a building speckled with pink, blue and gray windows rises into a white gray sky behind a leafless tree. The tree has been knit bombed, a form of graffiti in which public fixtures—trees, fire hydrants, stop signs—are wrapped in knitted accoutrements. In the artist’s statement, he refers to capturing these mundane moments as creating “a kind of totem to the Everyday.” Framed this way, the paintings capture and preserve the easily overlooked, even temporary moments in a city’s life. But the repetition and accumulation of these small moments—a knit-bombed tree, or a newly graffitied wall—very much affect daily life. If we think of the metropolis as a body, an entity that lives and dies, can be sick or healthy, the daily life of its inhabitants is an essential part of that body,and is both dependent upon and directly affects the health of that body.

Benson’s singular vision and unique process cull poignant moments to explicate this proposition. While some work can fall into a trap of relying on a unique process to justify itself, Benson’s process continues to stand up to the larger issues within the work. The sharp precision and calculating nature of the process translates well into the overall aesthetic. Each image communicates a “piece-y-ness,” in which we can see that the built environment is comprised of a build-up of layers, both literally and figuratively. Build, decay, build, decay; the circle of a city’s life is tangible in Benson’s pieced-together knit bombs and pasted graffiti. It is also evident in the pairing of dismal brown and gray buildings accented by unnatural neons and borderline putrid pinks and teals. They evoke equal parts appreciation for the indomitable human spirit to beautify, and pity for such seemingly futile efforts.

The exhibition is not without humor. A series of small watercolors, the Gratitude Series, depicts plastic bags. Cast offs from big box stores, drug stores, or take-out restaurants, the bags are caught up on bits of weeds or otherwise crumpled up and abandoned. They are minimally rendered landscapes or still lifes and serve as studies of the minutiae that comprise daily life. The artist’s dedicated observance of such small, quirky details adds some humanity back into these otherwise figure-less places. In Smiley Thank You (2015), a big yellow smiley face peers out at us from a plastic bag, one of his eyes askew. This is the closest we come to seeing a subject populate these images, and the inclusion pulls at the heart strings, invoking pity, affection, and curiosity. The artist’s output feels like a somewhat neurotic vision made tangible: a vision that observes and re imagines reality according to some pathology. Ultimately these images help us observe the city environment in all of its nuance: caught up in the cycle of life and death, diseased and recovering, inhuman yet home to so many.