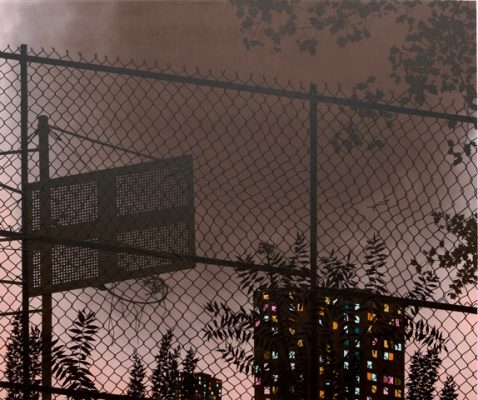 Painter Erik Benson’s urban landscapes are about subtleties: the silence of the city at night, the ethereal bright squares of colors broken by creeping twigs and barbed wire, the slight raise of acrylic layers on the canvas. The effect sinks in after a few moments, and viewers might find themselves lost in thought, hardly realizing they’ve drifted away.

“We live in a time where everything’s so fast and constant,” says Benson, whose show “Sleep Walking” is currently on view at Edward Tyler Nahem Fine Arts. “It’s nice to have a quiet moment with something.”

If the dark buildings in Benson’s paintings look vaguely familiar, it is because they are. The Brooklyn based artist constantly snaps iPhone photos of scenes he finds interesting and constructs his city compositions by picking and choosing details from all over. “It doesn’t really define one specific place,” he explains. “It’s more of an archetypal place.” The focus is on the hushed, uncanny mood of the cityscape. “I’m interested in the air in front of them,” describes Benson, “rather than the actual building.”

Benson’s works seem placidly uncluttered, but they weren’t always that way. The painter’s experiments with oil paint while a student at RISD produced “strange weirdo things that didn’t make a lot of sense,” he recalls. Then, unexpectedly, he developed an allergy to the medium, forcing him to switch to acrylic. “Telling an oil painter to do that is like a nightmare,” he says. “I hated it–acrylic was so nasty.” But Benson discovered something in the fast-drying, plastic-like pigment. “Paint fell all over the floor of my studio. I started peeling it off, and playing with collaging it on paintings.” He now has the technique down to a more methodical process. After he pours paint on the glass palette tables, he lets it dry and painstakingly cuts out the shapes he needs before laying them on the canvas.

While he’s happy to discuss technicalities, Benson is not inclined to pinpoint the mysterious mien of his paintings. “You can’t talk about the thing that it is, without ruining it,” he believes. “It’s better to talk about all the things that it isn’t.”