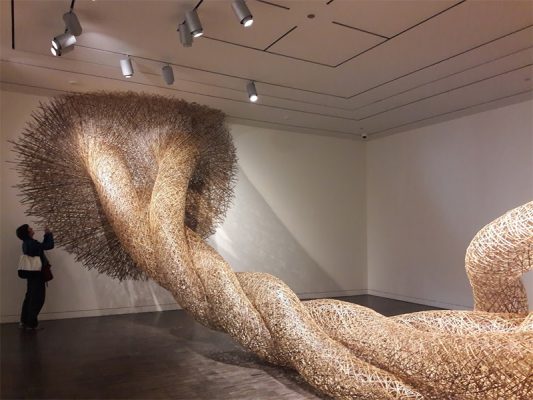 A woman with a camera, dressed in dark clothing, walked into Tanabe Chikuunsai IV’s art exhibit the other day, and here’s what she said, loud enough for everyone in the gallery to hear: “Oh, my God.” That sort of effusive utterance is often reserved for, say, news of great importance (“Trump did what? Oh, my God”) or great educational triumph (“He got into Harvard? Oh, my God”). But on an early Saturday morning at the Asian Art Museum, the woman directed her sentiment at an artwork of bamboo.

Chikuunsai IV’s Connection is no ordinary artwork. For one thing, Chikuunsai IV made Connection in the gallery itself, working with assistants to create a twisting, gnarled labyrinth of thick, tree-like limbs that take up the gallery’s entire length. The work’s brown “skin” is comprised of countless bamboo strips that are originally from a unique growing spot in Japan’s Kochi prefecture. The exhibit’s invitation card shows Chikuunsai IV amid green bamboo that’s rising skyward from a pristine Japanese forest. In the photo, Chikuunsai IV is holding a pole-vault-like piece of the green bamboo, cradling it like a sacred object. For Chikuunsai IV, bamboo really is sacred. Chikuunsai IV, whose given name is Tanabe Takeo, comes from a family of Japanese bamboo artists that goes back four generations, and traditions are strong in a family where the next Chikuunsai  basically has to earn his last name.

Chikuunsai IV’s great grandfather, Chikuunsai I, made baskets in the 1920s that are now in the collection of New York’s Metropolitan Museum, and Chikuunsai II made similarly sought-after baskets (also collected by the Met). But Chikuunsai III veered from those traditions, making art that was less utilitarian and more artful — like the 2008 work called Delight for the Future, an expressive, geometrically shaped piece that, yes, the Metropolitan owns in its collection. At age 45, Chikuunsai IV has veered further still as he makes large, room-sized works that spread out and twist in different directions and shapes. But Chikuunsai IV tells SF Weekly that he had the blessing of his father, who died in 2014. And Connection is not just an homage to his family — “I was thinking of my family, so that’s the first connection” — but also a new expression of his chosen craft. On other art projects, Chikuunsai IV has used computational design to make bamboo objects that look nothing like bamboo.

“In my family, tradition is very important — but creating something new out of the old tradition is the way you keep tradition alive,” says Chikuunsai IV, standing in the Asian Art Museum’s first-floor gallery and speaking in Japanese, which Maya Hara, the museum’s Japan Foundation Curatorial Assistant for Japanese Art, translated into English. “If the tradition stagnates, it dies — and nobody is going to continue it. By creating something new and being innovative, you’re continuing the tradition — though maybe my grandchildren or great grandchildren will look back and say, ‘Oh, he did something so traditional.’

”The bamboo for Connection is recycled from an earlier, related art project, and Chikuunsai IV’s repurposing of the stalks — and his plans to repurpose it again, when Connection ends its run at the Asian Art Museum — is a testimony to the way that art, like nature, can produce things that are fleeting and unexpected. Chikuunsai IV pointed to shadows that Connection made inside the Asian Art Museum gallery that mirror shadows he experiences in Japan.

“Aesthetically, bamboo represents one of the most beautiful materials,”  says Chikuunsai IV, who lives in Osaka. “When I go into the bamboo forests, and I hear the wind on the bamboo — the sound of the bamboo grasses rustling — it’s this rustic feeling. I love it. In front of my home, I have bamboo growing, and I have a sliding, rice-paper door, and you can sometimes see the shadow of the bamboo, and it’s moving around. It’s aesthetically pleasing.”

At the end of the interview, Chikuunsai IV went back to Connection, dropping to the ground and sitting cross-legged as he made sure that each new strip was integrated with another. The closer that art-goers get to Connection, the closer they see the intricate weaving that Chikuunsai IV does to make the art what it is: an assemblage of sturdy plant stalks that first emanated from nature and then from the mind of Chikuunsai IV,  who’s free to make what he wants as he travels from Japan’s sacred bamboo forests.