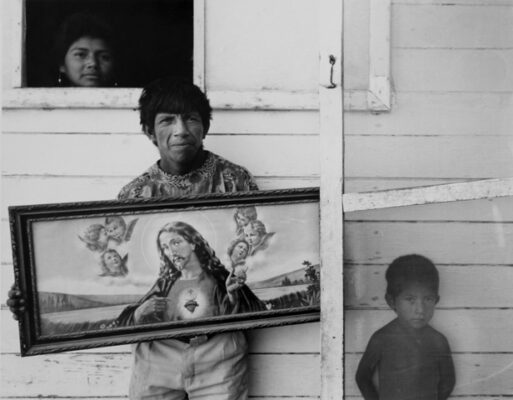 If you are an artistic photographer; to what extent does your home—the place where you live and work—color the intent and result of the portraits you shoot?  A group of artists from Mexico, Peru, Panama and Cuba whose photographs explore their subject’s connections to their cultural and geographical context are featured in “Portrait and Place,” a show opening today at Eight Modern on Delgado Street.

Robert Fantozzi, Flor Garduño, Graciela Iturbide, Rachelle Mozman  and Reñe Peña are included in the exhibition, gallery director Jaquelin Loyd said, “Some of the connections these photographers have to these cultures in which they work are expected and some are unexpected.”

Based in Lima Peru, Fantozzi, 55, won first place in a photography context sponsored by the University of Lima in 1976.  Inspired by that win to pursue photography as a career, he earned a Fulbright scholarship and received his master’s degree in 1981 from the Rhode Island School of Design.

Fantozzi has a taste for the bizarre, and his work frequently touches upon the art of photography itself, or other methods of representation.

Garduño, 51 was born in Mexico City and raised on a farm in rural Mexico. From 1976 to 1978, she received her formal arts education at the Antigua Academia de San Carlos (UNAM) under the tutelage of the Hungarian photographer Kati Horna. However, in 1979, her studies were foreshortened upon her acceptance of an offer to work as the darkroom assistant to Manuel Alvanez Bravo—regarded as perhaps the greatest Mexican photographer of his era.

Garduño’s sensual, poetic black-and-white photographs of the Americas and female nudes draw deeply from a vein of mythic symbolism and magical realism. Her work has been exhibited at the Art Institute of Chicago, and the national fine arts museums of numerous countries, including Argentina, Bolivia, Chile, Columbia, Peru, Uruguay, and her native Mexico.  Garduño has published seven monographs, for which she has won numerous awards.

Inturbide, 66 is considered one of the most influential modern Mexican photographers.  A 1969 graduate in filmmaking from the Centro Universitario de Estudios Cinematográficos at the Universidad Nacional Autónoma de Mexico, she also served as an assistant to Manuel Alvarez Bravo.  Her images have become emblematic of Mexican ritual and culture.  Fascinated by both the theatrical and mundane, Inturbide describes the camera as “an instrument capable of disintegrating moral barriers, personal and social inhibitions, trusts, and distrusts.”

Her work has been exhibited at the Metropolitan Museum of Art, the Museum of Modern Art and the Getty Museum, and she has received numerous honors, including Guggenheim Fellowship and the 2008 Haselbad Foundation Award in Photography.

Mozman is based in both Panama City and Brooklyn, is slated to attend the reception today.  Also a former Fulbright scholar, she earned a master’s in fine arts degree in 1998 from the Tyler School of Art.  Her recent photographic projects, “American Exurbia” and “Costa del Este,” depict children from New Jersey and Panama in their homes, drawing surprising parallels between products of similar exurban environments.

Mozman’s work exists as an exploration of identity creation and globalization, depicting moments where individuality meets the constraints of newly formed communities and cultures.

Contrast is a central theme in the work of Cuban photographer Peña, 52.  Working in black and white, Peña explores the dualities that define people, such as the external tension between individual and institution.  Peña takes searing, honest looks at the individual, including self portraits that explore issues such as blackness and sexual ambiguity.
Peña actually studied the English language from 1977 to 1983 at the Instituto Superior de Lenguas Extranjeras in Havana, where he was born and raised.  He began his work as a photographer on his own.
A self-taught artist, Peña has exhibited work around the world, including Italy and Germany, and in his home country, Mexico and Peru, as well as at the Houston Museum of Fine Art , the National Museum of Fine Arts in Cuba, Fototeca de Cuba, Lehigh University and SUNY-Albany, New York.