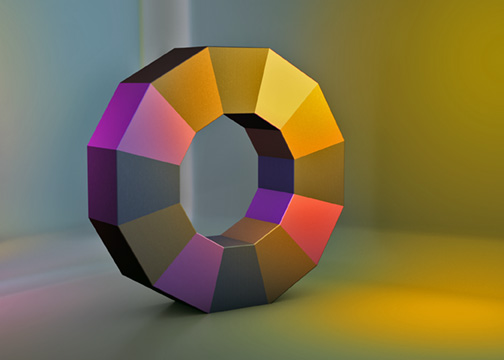 On a recent episode of Antiques Roadshow, a man recalled vivid boyhood memories of staring at a landscape painting in his parents’ home. As a boy, he said, sometimes he felt that he was walking on the dirt road depicted in the painting. The Roadshow art expert told him the painting was worth hundreds of thousands of dollars.

Another kind of art expert might have said that the artist had placed that road exactly where he did to cause those with the imagination to feel as if they could step into the painting. She might also have explained that illusionism – techniques that cause two dimensions to be perceived as three – was at the heart of Western painting for centuries.

Illusionism’s importance waned during the first half of the 20th century after modernist masters like Piet Mondrian and Theo van Doesburg experimented with abstraction. By the early 1960s, when Ronald Davis left Cheyenne, Wyoming, to study at the San Francisco Art Institute, that school no longer taught young artists how to create illusionistic space. The Abstract Expressionist painter Clyfford Still taught at the institute during the 1940s, Davis explained during a recent interview. All of Davis’ instructors, except Richard Diebenkorn, had been heavily influenced by Still. Diebenkorn would later become the most famous West Coast abstractionist, but when Davis was a student Diebenkorn still painted people and landscapes.

In spite of long talks with Diebenkorn, Davis was enthralled with abstraction. He remembers staying late at the institute’s library reading articles by art theorists like Clement Greenberg, who had praised the Abstract Expressionists’ total rejection of three-dimensional illusions. “The buzz at that time was Frank Stella’s idea of making paintings that were objects in real space,” Davis said. “And, I thought, if Stella is doing painting as object, can I do an illusion of an object? Can I do what painters have always done through the centuries?”

Although Davis is often identified as a California artist, he says that he was deeply influenced by the heady art theories spilling out of New York during the middle of the 20th century. Yet he found himself rejecting the era’s most radical art tenet – that a paintings flat surface should not be violated by illusion. Davis taught himself to draw geometric shapes using two-point perspective.

Davis has never made paintings that would cause a little boy to daydream about entering the canvas to walk down a dirt road; for more than 50 years he has painted rectangles, cubes, cylinders, arches and 12-sided polygons. Davis often works in alternative media like fiberglass, polyester resin, and most recently, ink-dye transfer on aluminum.

On Friday, Nov. 16, Eight Modern opens 3D/CG: Ronald Davis, Three-Dimensional Computer Graphics, 2004-2007. The familiar geometric shapes generations of artists have used to construct illusions of trees, faces, and cityscapes are all here. In some of Davis’ works, like Three Rounds Four, cones and spheres have the classical purity of those painted by the 15th-century artist Paolo Uccello. But in other works like Two Rounds, Brushed, cylinders twist and bend as if they have attained the powers of Plastic Man.

Much like garish artificial flowers, Davis’ illusionistic shapes are in-your-face fake. Printed Puck is lavender with purple dots that appear to stretch as if being sucked into another dimension. “It’s virtual; it’s not artificial,” Davis said about these new works. “All these things could exist somehow as sculpture, but they might have to be made out of cellophane or some exotic material.”

Davis created all the images in 3D/CG on computers. He often cites their media as “pixel dust” on aluminum, but they are dye-transfer prints made on the same machines that print wood grain onto Formica.

Davis drew his earliest geometric shapes freehand, but by the 1970s he was experimenting with computer graphics. Through a program at the Los Angeles County Museum of Art, he was able to work on an IBM mainframe. Always in love with technology and new materials, Davis said he has learned several computer languages to keep up with ever increasing computer-graphic capabilities. The precision possible with the three-dimensional programs and Davis’ pixel-dust printing techniques gives works like those in his Upright Dodecagon series a cool perfection that he calls transcendental escapism. “The world is kind of crazy,” he noted. But in a work like Upright Dodecagon, he added, “there’s a clarity that you can’t experience in the clutter of the world.”

Davis occasionally makes work that seem to fly in the face of the serene purity of Upright Dodecagon. In a series he calls Presidents’ Rooms, he has “hung” clip-art portraits of American presidents in virtual rooms. Harry Truman Room Six is the only image from the series included in 3D/CG. “When I was 11 years old, my dad took me down to the Union Station in Cheyenne, Wyoming, and I saw Harry Truman on his cross-country campaign. I still remember being on my father’s shoulders.” Truman Room Six, Davis added, “is about honoring Truman, but it’s also just an abstraction. Andy Warhol was asked why he was doing a Campbell’s soup can. He said he liked soup. Well, I like Truman.”

When talking to Davis about his art, it becomes clear that, though many of his images seem cold and have been generated on a computer, they are informed by thousands of life experiences: a young man’s long talks with his art teacher, the feel of his father’s shoulders as they provided a perch from which to glimpse a president, and late nights spent in a library.

“I remember being in Hollywood and talking to a woman who had a Ph.D. in comparative literature, and she asked, ‘Just what does that painting mean?’ And I said, ‘I don’t know what it means. I just know how to make it. If I knew what it meant, I wouldn’t have to make it. It wouldn’t be interesting.”