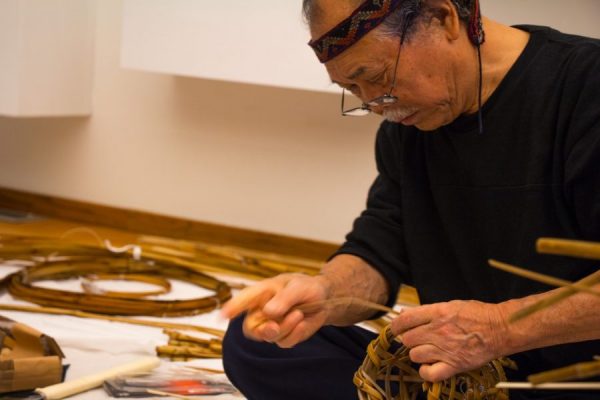 JEANNETTE YAN: Noboru Fujinuma, a renowned contemporary basket artist, creates a chabana container used for flowers during a tea ceremony at the Japan House on Oct. 24. Fujinuma is a Living National Treasure of Japan, meaning he is certified as a preserver of important, intangible, cultural properties.

While teaching at the Art Institute of Chicago, Professor Emeritus Shozo Sato was asked to translate for Japanese bamboo artist Noboru Fujinuma. Sato graciously agreed. Fujinuma, who spoke little English, was visiting after some of his bamboo work was bought and donated to the Art Institute of Chicago. Translating during the exhibition taught Sato more about Fujinuma, and they grew to be close friends.

Fujinuma gave a lecture Wednesday at the Japan House on arts and Japanese culture.

“This law was actually established to protect Japanese cultural heritage, and all properties that are deemed in this manner are considered to be the highest level of art or craft,” said Jennifer Gunji-Ballsrud, director of the Japan House. Gunji-Ballsrud also said the term “Living National Treasure” references cultural properties that are considered Japan’s most valuable assets.

Fujinuma and Sato share a mutual appreciation of traditional Japanese art. Sato came to the University in 1964 as an artist-in-residence per the request of the dance department director, Margaret Erlanger, who was intrigued by his work in Japanese theater and dance. Sato’s impact on his students was so monumental that a number of them wanted him to teach actual Japanese art and culture courses. He officially began teaching in 1975. Around the same time, Sato founded the Japan House. Sato, through their friendship, convinced Fujinuma to visit the Japan House.

“(Fujinuma told) me, ‘Shozo-san, I’m going to metropolitan, isn’t that exciting?’” Sato said. “Then I said, ‘On the way home, would you mind stopping at the Japan House?’”

On Tuesday Fujinuma hosted a bamboo weaving workshop at the Japan House. It was first come, first served and exclusive to only 12 participants. 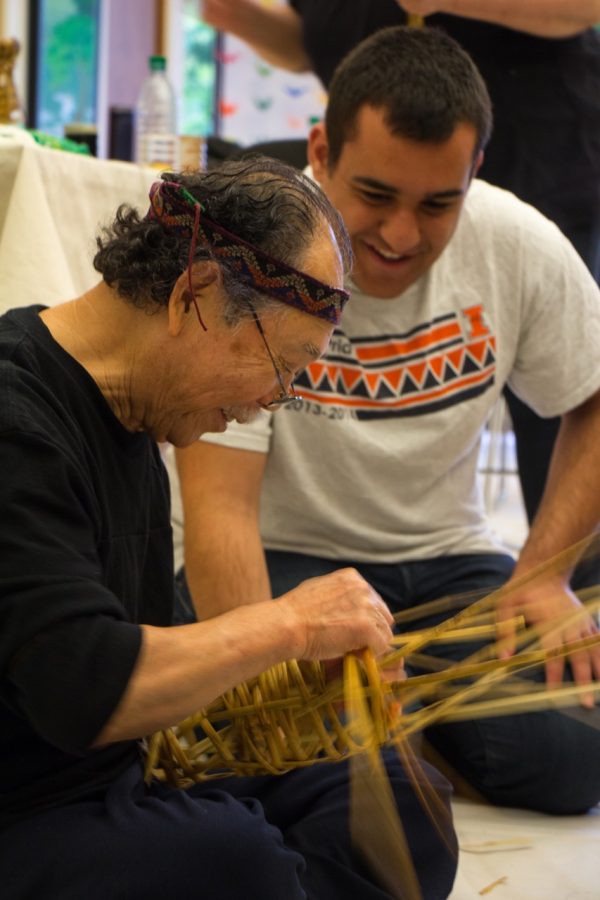 Jeannette Yan: Fujinuma helps Itamar Allali, senior in LAS, with his chabana container, a basket container used for flowers during the tea ceremony.

At the workshop, Fujinuma displayed a simple basket he had made in an hour. Fujinuma and his daughter, Keiko, prepared the bamboo, the base template and other material for the basket in about four hours. Keiko, like her father, is trained in traditional Japanese art but works more with fiber, dye and needlework. She described herself as, spiritually, the apprentice of her father.During the workshop, Fujinuma demonstrated, slowly and carefully, all steps for each component of the basket. With bamboo in hand, the participants watched on as Fujinuma walked through the processes they then tried to attempt.

Sato said Fujinuma’s uniqueness is his balance of strength and delicacy.

“One of his strengths I see is boldness and then ultra sensitiveness — the two opposite. Most bamboo artists are one-sided,” Sato said.

Fujinuma and Keiko walked around and assisted the basket-weavers-in-training when they needed help. Gunji-Ballsrud and Sato also participated in the basket making workshop.

“To transform (the bamboo) into (a basket) was truly an exhilarating experience for all of us, and (Fujinuma) was an incredibly patient teacher,” Gunji-Ballsrud said.

Sato said he wanted participants to understand that creativity comes from working with ordinary materials.

“Bamboo baskets have existed for thousands of years in Japan. Eventually that elevated to one of the highest art forms,” Sato said.

Fujinuma presented photos of his artwork on Oct. 25 and he provided background information, as well as the processes that go into his basket weaving. During the presentation, Sato translated for Fujinuma, who commented on the woven baskets made at the workshop.

Each participant replicated the same basket. 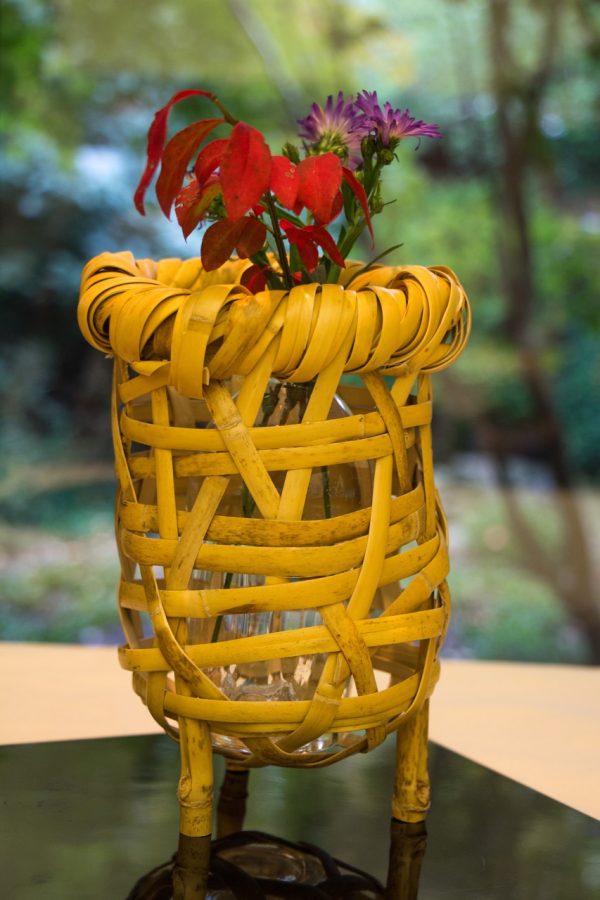 Jeannette Yan: A chabana container, or a basket container used for flowers during the tea ceremony.

“(The baskets) came out very differently according to their personality. We see so many people, but each one is different; therefore, their work is different,” Fujinuma said.

The presentation featured many images of Fujinuma’s pieces.

“Before I became a bamboo artist, I was a photographer, so I know what angle (for the shadow) to show the delicate inside,” Fujinuma said.

Gunji-Ballsrud described Sato and Fujinuma’s friendship as a “fortuitous meeting.” She said the chance encounter gave the Japan House an opportunity of a lifetime to host Fujinuma, the Living National Treasure of Japan. After the presentation, Sato presented a tea ceremony in honor of Fujinuma and Keiko for taking the time to come to the Japan House.

“The same way we drink water, orange juice, tea or coffee … how can you elevate that necessary level into the highest level of art,” Sato said. “(You) honor that moment of drinking tea, and that is (the) experience of joy … so you say, ‘Isn’t it wonderful I am living?’ That is the purpose of (the) tea ceremony.”