Robert Lobe’s sculptures astonish, in this déjà vu art world, with their grandeur and originality of vision. Of his new works, both wall pieces and freestanding tree sculptures, Lobe says that he is “returning to nature in a new way, more conscious of the sublime– a sublime both fearful and beautiful.” This attitude toward nature places him as a Northern Romantic; and in his treatment of landscape, which magically fuses the scientific and the ecstatic, there are analogies to American Transcendentalism.

His recent New York exhibition showed important new developments from his previous work. A deftly affirmed contrapuntal relation between realistic nature and abstraction has always been fundamental to his sculpture. But in his new show, both the bas-reliefs and the freestanding tree works are far more abstract– further from the motif– than any of Lobe’s other works from the past 25 years. In both genres, the artist now “rearranges” the nature that he selects to be shaped and hammered into art.

Peacepipe, Vine, and Page 1, Vol. 11 all demonstrate this move toward greater abstraction. They are composed in a freer way, with a virtuoso treatment of surface. Lobe says that his use of much thicker aluminum sheets, which he anodizes, allows him to work the aluminum “like clay.” Thus, he can create voluptuously articulated surfaces, with whorls of molten metal and labyrinths of lines within a volcanic terrain. Truly “abstracted” from the original object or site in nature, these works are more Lobe’s conception of particular natural elements than literal re-creations of those elements themselves.

The new wall piece, Vine (1999), with its extravagant silhouette and a surface that is both meticulous and sensuous, is emphatically Baroque in its theatricality, plunging diagonals, and complex patterns of movement. The edges, also Baroque in character, alternate between sharpness and fluidity, giving the work a dramatic tactility. In Vine, Lobe adapts the technique of radically opposing directional movement: one mass of volumes moves left, the other right, creating a mood of energy and majesty.

All of the wall pieces embody the virtuoso themes of regeneration and metamorphosis, so favored by sculptors such as Bernini. Of the bas-reliefs, while Vine continues the triumphantly Baroque tone, compelling in its vertiginous stance and lush, complex rhythms, Peacepipe (1999) and Page I, Vol. 11 take a decidedly classical stance: serene, balanced, taut, and centered.

Lobe sees the bas-reliefs, particularly Page I, Vol. 11 and Vine, with their elegantly broken, irregular edges, as “pages torn from a notebook– the notebook of nature.” The analogy to pages or drawings is apt, as Lobe, with his hammering tools, “draws” on the aluminum sheets.

As concentrated distillations of a whole, these works have immense power. Lobe knows that the fragment has an undiluted energy and plastic unity that the whole may not. In these works, the formal qualities themselves-the volumes, the mass, the lines, the edges, the rhythms– are so precise as to symbolize the whole. Surely these surfaces, where light makes the forms dissolve and merge, creating an image of a world in movement, read as microcosms of pitted and fissured matter. The bronzed surfaces reveal a substructure of turbulent and restless volumes.

Stark and calligraphic, Lobe’s rhythmic groupings of trees show an inward and perceptual relationship to nature. To the artist, they are “interior landscapes.” There is a spare and linear elegance to the tree works and a spatial symmetry that suggests an Eastern aesthetic. In the wall pieces, Lobe gives the energies of art and nature equal power; in the tree works, he suggests that art has the greater voice. The beauty of the compositions, both as individual units and as a group, lies in the inexhaustibility of viewpoints. The accents–stones on the branches–are like music, creating a spare rhythm.

As Barry Schwabsky recently noted in Art in America, most sculptors who supposedly deal with nature have no spiritual or philosophical relationship to it. The United States may possess vast expanses of extraordinary natural landscape, but we Americans do not believe in it. While we are at home in nature, nature is not our home.

As seen in Malagash– Place of Games (1980), Lobe’s affirmation over 20 years ago of the ancient but forgotten truth of man’s interdependence with nature relates to American Transcendentalism. He has surely achieved his own transcendental sublime. His unique achievement recalls the words of Leonardo da Vinci, who praised artists “capable of disputing and contending with nature.” Lobe’s sculpture suggests a possible mediation between human existence and the larger natural world. He is an important sculptor not only for his formal qualities but also for the authenticity and relevance of his vision.

Margaret Sheffield is a writer living in New York City. 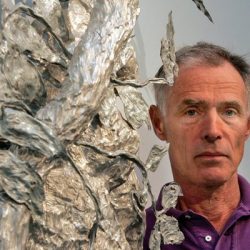