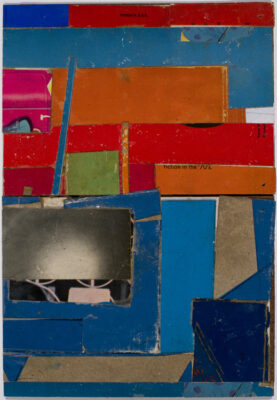 “When something is designed as a utilitarian object, decisions are made in its construction that give it a voice – what fabrics are available – and I am trying to invest the work with a structure that has an underlying logic of craft that is expressive of something else: a personal and intimate experience in making it,” says Austin-based Lance Letscher (as found here at D Berman gallery).

My friend Donald insisted I check out Letscher’s book, which he thought I’d love, and I do. I appreciate how Letscher’s work inevitably enfolds history through his use of materials/remnants, and his patterns may be massive and vibrant, but are built from modesty, time, and gradation as well. For me the most inspiring thing about this work is the topography and sense of space Letscher creates with nothing but bits of meticulously-applied paper that are allowed to remain just that. Also, some of his work is mural-sized (but still composed of the same small pieces).

It was interesting to find (in this Fiberarts article) that Letscher originally worked with wood and stone before arriving at collage. His first collages were made by the layering on cardboard of small realistic tree branches he had drawn and then cut out. It’s like his 3d proficiency imploded into a page!