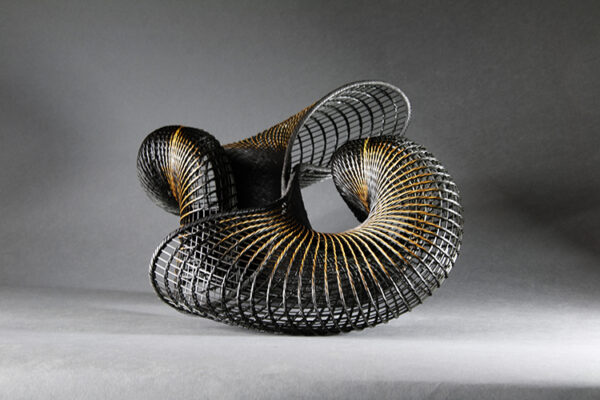 When I first learned that bamboo artist Honda Syoryu studied under Kadota Niko, I was puzzled. Kadota Niko, a prominent member of the Iwao lineage, worked in the traditional style of the Beppu region and was known for his imposing, extremely intricate jar-shaped flower baskets. Honda is recognized primarily as a sculptor, and even the vessels he made in his early career had an artistic style and sensitivity that felt modern, innovative and foreign to Beppu. I wondered if Honda was rebelling against his teacher and the regional tradition he had been taught. However, I soon began to feel the spirit of Kadota Niko in his work. I no longer see Honda’s sculptures as a rejection of tradition but an embrace and evolution of a great bamboo art legacy.

Much of Honda’s work has drawn upon two very basic plaiting techniques – twining and twill plaiting. These age-old techniques have been used in Beppu to make baskets and boxes for over a century. Honda uses these ordinary techniques to extraordinary effect. By controlling the width and thickness of his twined bamboo strips and altering the spacing between each row, Honda transforms what would be a simple cylinder into the dynamic, undulating shapes of his signature “Dance” series. In his “Rhythm” series, he rolls up a length of flat twill plaiting into a tube, which he bends and ties into an elegant, looping composition. Though these techniques have been used for hundreds, if not thousands of years, no one ever used them in the ways Honda does.

In his second solo exhibition at TAI Modern, Honda is introducing two brand-new series. In the “Spring” series, a synthesis of two earlier bodies of work, Honda bundles and coils airy twined tubes into free-form shapes. Also new is the “Ring” series. Other than Honda, who else could create something fresh out of the bullseye plaiting (rinko-ami) technique which has been used as the base of baskets for centuries!

Honda uses some of the most common techniques passed down from early basket makers, yet he is able to adapt these traditional techniques to create completely original sculptural forms. In this, Honda is an embodiment of a core tenet of Japan’s craft art – the marriage of continuity and change.