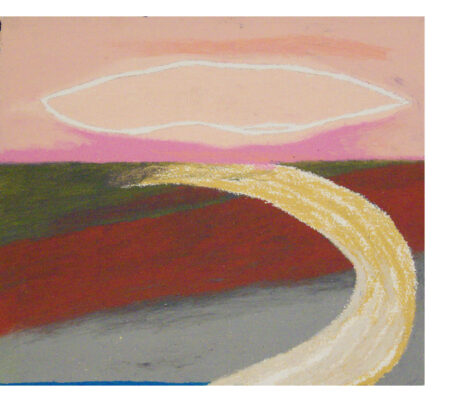 From Long Ago to Now

Linda Whitaker’s work is being honored at Eight Modern
20 years after she stopped painting.

Not many midlife former artists are honored with a retrospective 20 years after they stopped painting, but that’s the anomalous situation California real estate agent Linda Whitaker finds herself in today.  A show featuring never-seen work she did two decades ago in northern New Mexico is opening for a five-week run at Eight Modern.  It happened because of the extensive memory of design consultant David Hundley, who had remembered paintings by Whitaker that he loved when he saw them in Taos that long ago.

Hundley, a celebrated design consultant who has worked with Lexus, Ralph Lauren and Gucci and the exhibit designer for the recent show, “Hearst the Collector” at the Los Angeles County Museum of Art, said he sees Whitaker’s compositions play out in front of him every day in New Mexico.

“I bought two of her small paintings during her time in Taos, then in a move I lost one and lost Linda along the way, but I always remembered her skies,” Hundley said.  He said he felt compelled to stage another exhibition of the artist’s rich, vital oil pastels.
Whitaker, currently a successful Realtor in Murrieta, California, stopped painting two decades ago for a variety of reasons.  “I came to a certain place where it lost its meaning for me,” she told the Journal.  “I was 40 and married…it had gotten really personal and I felt a little exposed.  I don’t know—I just closed that door and walked in a different direction.  My husband and I had lived in Glorieta for several years and during that time he had worked at Los Alamos and driven a three-hour commute every day.  He was burned out and I wanted to support his decision.  We moved to Southern California.  I was aghast, but it’s worked out.  The things you do for love…”

Making a living was part of her decision to stop painting, Whitaker said.  “You do you work and you do the best you can, but I realized that I was getting older and old age was not looking good to me.  I realized I had to start making some money.”  Not long after their move to California, her husband developed some serious health problems and Whitaker because the primary bread-winner.  As for many people in Santa Fe, real estate sales became a very viable fallback.  She put her paintings in storage and created a new career.

“It amazes me that my paintings remained so vivid in David’s mind,” she said. “He really kind of had to stalk me.  The universe works in very mysterious ways.”

Hundley did trace Whitaker, and discovered that she had a cache of rarely seen paintings from the ‘80s.  He persuaded her over several conversations to let him curate a show for Eight Modern.  “He told me it’s not about me, it’s about the work,” Whitaker said.  “He was very convincing.”

As the years have passed, Whitaker’s oil pastels have continued to speak powerfully about the New Mexico landscape, Eight Moder director Jaquelin Loyd said.  Done in the style of early modernists such as Marsden Hartley and Arthur Dove, color and form take on a raw intensity.

“Whitaker shows off her mastery in manipulating her extraordinary palette of colors to achieve heightened, psychological effects,” author Lorna Smedman wrote in a 1988 essay about Whitaker.  “In her paintings, and black and white drawings, her compositions are fanciful and dramatic.  Whitaker’s work is courageous, generous and affirming, a rare gift these days.”

Loyd said Whitaker’s work was thoughtful and inspired, dealing with both the power of the Southwestern landscape as well as the human figure.  “In my work, I am primarily interested in giving access to not readily accessible realities,” Whitaker wrote in 1985.  “That is, to suggest other ways of seeing the mystery and magic inherent in everything.  The world is emblematic.  I see my work as a process of contemplation and discovery with nature as the subject a synthesis of inner experience and transformation.  Or, as Arthur Dove once said, ‘Maybe the world is a dream and everything in it is yourself.’”

As the show has taken form, Whitaker has come to enjoy this chance to exhibit her work again.  “It is curious and odd,” Whitaker said of having a retrospective, solo exhibition, “But I have gone from reluctance to embracing the gift of exposure.”

While the art being exhibited in the show is from 1985-1990, the images still seem fresh.  Whitaker chose to leave the show’s direction up to Hundley, who focused on her powerful landscapes.  “Linda’s style is not dated or tied to any chronological movement,” Hundley said.  “They are beautiful abstractions of the New Mexico landscape to the viewer.  A photographer, looking at the works to be displayed in the show stopped at one image, pulled out his phone and showed me the same image, Cerro de Taos, photographed from his home.”

Whitaker’s last exhibitions were in 1990 when she had a Wurlitzer Foundation residency grant in Taos and was featured in Montclair State College’s exhibition of Black Women in the Arts.  She was included in many solo and group shows throughout New York and New Jersey in the 1970s and 1980s.  Whitaker received a master’s degree from the School of Fine Arts in Boston and a bachelor’s in psychology from the University of Massachusetts.

Of her Wurlitzer residency, Whitaker said, “Not to be too clichéd, but I had the quintessential New Mexico experience—New York City girl comes to the Southwest and falls truly, madly, deeply in love with everything: the landscape, the weather, the culture, the smell, the sky, the architecture, the horizon and the mountains.  Life became very simple yet very rich, as I was able to wallow in solitude.”

With “The Floor of the Sky,” Whitaker is revisiting those halcyon days and the Southwest, and says she is open to whatever inspirations her visit for the exhibition opening may offer.   “I think you need to stay awake to nudges from the universe,” she said, “especially those coming from left field.”