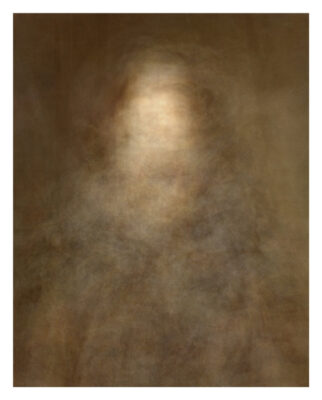 “I’m performing a heartless mathematical operation, but it has a relationship with [early abstractionists] who took the reality of the situation and brought something to it that made it bigger than the individual moment.”

Jason Salavon selects as source material groups of images from popular culture—real-estate listing photographs, Playboy centerfolds, high-school yearbook portraits—and blends them into generalized images characteristics of types existing in everyday life.  For the above photograph, Every Playboy Centerfold, The 1980’s, Salavon chose to blend pictures of not-so-average women in a series entitled Every Playboy Centerfold.  By fusing 120 centerfolds from each decade in the 1960s-90s, Salavon created blurred compositions emphasizing predominant characteristics of the typical Playboy model: long hair, light skin, thin body, and radiant against a bluish background.  Presented as a series, the pictures reveal the thinning, lightening, and increased frontality of the playmates over the years.  All of Salavon’s amalgam series depend on the digital capacity to treat every pixel individually and operate the mathematical formula for averages on minuscule color elements.  Yet the technological precision used to produce his pictures is counterbalanced by their hazy, impressionistic form.  The final compositions, significantly abstract, reveal culture generalities as they hint at the glut of information, manipulated and generated by the digital mediums, that has become a powerful reality of contemporary life.

The son of an artist, Salavon (b. 1970) received his education at the University of Texas at Austin (BA, 1993) and the School of the Art Institute of Chicago (MFA, 1997).  His exhibitions include shows at the Museum of Contemporary Art, Los Angeles; f a projects, London; and The Project, LA.  Salavon’s works are also held in many private and public collections, including those at the Whitney Museum of American Art, New York; the Los Angeles County Museum of Art; the Museum of Contemporary Art, Chicago; and Playboy Enterprises, Chicago.  He is currently a part-time faculty member in the Art and Technology Department at the School of the Art Institute of Chicago.