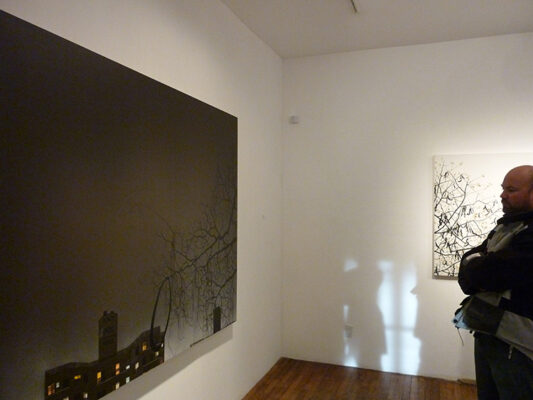 Brick by Stick, The Cityscapes of Erik Benson

Erik Benson paints scenes that are quiet and still.  There are no people in his paintings, though traces of their presence are everywhere.

If ever a case could be made for seeing paintings up close, the work of Brooklyn-based painter Erik Benson is it.  There is a clarity and attention to detail in the group of Benson’s paintings on view at Eight Modern that, while possible to achieve with brushwork, cannot be properly appreciated until it is understood that he is working with an unusual application of collage.  “It looks like flat line, architectural work, until you actually see it,” Benson told Pasatiempo in an interview, “and it’s actually built and constructed.”

Built up in layers superimposed over one another, the elements that form Benson’s paintings are cut from sheets of acrylic paint and applied to the canvas piece by piece—or, given the architectural subject matter, you might say brick by brick.  “I was really attracted to doing these paintings of elements of urban landscapes that had something to do with the plasticity of painting,” he said.  “The process that I was using to make these was similar to how they actually looked and how you really see them.”

Benson paints scenes that are quiet and still.  There are no people in his paintings, though traces of their presence are everywhere.  One sense that the addition of a human subject would dramatically change a painting’s focus and, given his technique, possibly add a layer of unreality.  “When it becomes figurative, it takes on a whole different kind of framing, and I just want to stay away from that.  I have some pieces that I do that have graffiti elements, and sometimes the graffiti takes on this almost figurative characteristic.  It can become problematic, so it’s very important to keep that at bay to some extent.”

Several paintings in the exhibit—“Resse”,”Skeletons”, and “Eminent Domain” (from which the show gets its title)—depict graffiti on building walls.  While some of the graffiti imagery is applied using the collage-like technique, some is painted directly on the surface.  “I’m actually painting back into things a lot lately,” Benson said.  “It’s adding to the work quite a bit, I think.  I’ve been staining and glazing things, and I’ve been using a lot of airbrushing techniques lately, too.”

Benson works from a 4-by-8 foot glass surface, on which he applies layers of acrylic paint from which he cuts out his shapes.  “The paintings are on canvas stretched over panels,” he said.  “They usually lie flat while I’m working on them.  I’ll do an isolation coat of an area where I’m applying things.  Once it comes off the surface of the glass, it has a tactility to the backside of it.  It will want to stay where it goes without too much gluing.  I place the pieces, and they get sealed afterward.  It’s basically just a polymer emulsion, like clear acrylic paint.”

Benson works from photographs but avoids allowing too many details of geographic locations into his work.  They convey a mood or a feeling experienced in an urban landscape but are not intended to represent a specific moment or a place in time.  “The whole process, in the way they’re made into collage, happens conceptually through my photographing these things and then bringing them into paintings,” he said.  “There’s a real cut-and-paste element to it all.  I try to take archetypal buildings rather than specific ones.  There are some that are specific, but I try to play it down a little bit.  When they become too specific it becomes more like a postcard or a rendering of something.”

The precision required to depict every brick in a wall or every window in a modern high-rise condo using Benson’s cut-and-paste method doesn’t detract from the painterly quality fo his imagery.  Somehow, the atmospheric scenes of city landscapes stir up melancholy feelings, as evidenced by a painting called “Mixtape,” in which an old building sits beneath a darkening winter sky.  Adding to this sense of pensive sadness is the presence in all the paintings in “Eminent Domain” of blackened, leafless tress.  “I think there’s something really specific about that,” Benson said, “that has to do with living in an urban environment like here in New York.  Trees aren’t always the things you think about when you’re in New York.  It brings you back to the bucolic landscape.”

Benson’s imagery juxtaposes the organic, branching forms of the trees with the architecture.  There is always that presence of the man-made.  Even in the trees, we see tangled wires and plastic bags caught in the gnarled branches.  “I think part of the dynamic of the work is the ambiguity it brings up,” he said.  “That’s what I’m interested in, anyway—the quiet moments where you’re able to kind of get in and notice these things you wouldn’t normally notice.”  Benson is a skillful observer.  In the painting “Skeletons,” for instance, massive structures—incomplete buildings either in early stages of construction or in ruins—lose vividness of color with distance.  The sharpest imagery is in the foreground—a brick building marred by graffiti and a tree (Benson has depicted every branch).

What he seldom shows is the entire structure of a building.  He doesn’t so much leave it to the imagination but rather captures a way an urban scene is actually experienced firsthand.  We see the top half of a structure, as in the painting “Eminent Domain,” for instance, and the bottom half is hidden behind a wall.  “I’m always attracted to that idea.  There’s always this obstruction of something that you’re not quite seeing that’s either off the canvas or hidden by another element.”