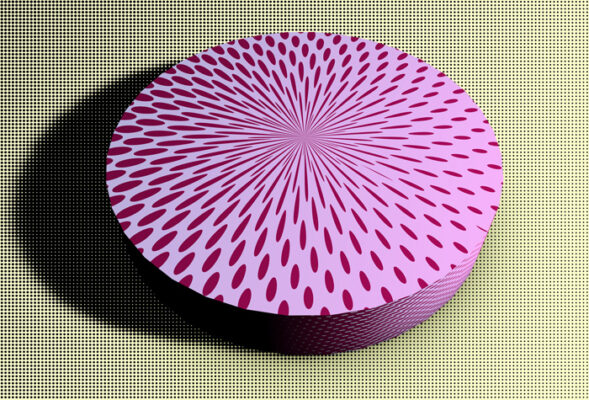 Between January, 1968 and October, 1969, Ronald Davis produced a remarkable series of twenty-nine paintings roughly twelve feet across in the shape of dodecagons. These paintings represent a unique synthesis of the diverse concerns of the artists of his generation (he was born in 1937) in sustaining modernist painting as a viable vehicle for experiment and innovation. A native Californian, Davis’s preoccupation with the art of painting was unusual in the context of the LA scene. At the time, art history in Los Angeles seemed a subject more interesting to costume films than to young artists anxious to assert their independence, not only from the European tradition, which they viewed as exhausted, but also from the “heroism” of the New York School, that to laid-back Southern California seemed too much theatrical posturing.

Because of his programmatic rejection of the concerns of both Paris and New York, within this context the only modern artist acceptable as a role model was Marcel Duchamp. The myth of the Dadaist master’s dismissal of painting on canvas as a relic of the dead past had wide currency in California where two of Duchamp’s closest friends and major collectors, Walter Arensberg, originally of Philadelphia, and Bill Copley, a wealthy Surrealist dealer, collector and later a proto-pop artist spread his legend. The main points of Duchamp’s message were 1) that art was merely another object, having no claim whatsoever to transcendence; 2) but nevertheless those objects should be as well made as possible because high level craft was in itself an aesthetic. Duchamp’s more sophisticated concerns with the nature of depicted illusion in relation to the reality of the object depicted were for the most part too cerebral to be of use to many at the time. But his preoccupation with craftsmanship became the most obvious common denominator of the so-called “sunshine school.”

Davis saw a way to use Duchamp’s perspective studies and transparent plane in the Large Glass for pictorial purposes. Instead of glass, he used fiberglass to create a surface that was equally transparent and detached from any illusion of reality. Because his colored pigments are mixed into a fluid resin and harden quickly, multiple layers of color may be applied without becoming muddy. his is essentially an inversion of Old Master layering and glazing except that color is applied behind rather than on top of the surface. In a letter to the Tate Gallery, which had acquired the 1968 painting Vector, Davis described the technique he began using in 1966:

“Fiberglass cloth and mat replaced canvas as reinforcement and support for the colored resin (paint). They were painted with a brush face down on a waxed Formica table mold. The illusionary plane nearest the viewer was masked out with tape and painted first, the furthest away was painted last. Layers of fiberglass impregnated with resin were laminated to the back of the painting… The completed painting was peeled from the waxed mold and polished.”

Alone among his contemporaries, Ronald Davis was equally concerned with traditional problems of painting: space, scale, detail, color relationships and illusions as he was with the California emphasis on hi-tech craft and industrial materials. How to reconcile the literal object produced with the latest technology with transcendental metaphor became the problem that occupied throughout the Sixties.

Renouncing cloth as ground beginning in 1966, Davis began his experiments in locating both color and spatial illusion behind the transparent polished fiberglass surface. his was and remains an unprecedented venture, abandoned by Davis himself when he returned to linen supports in the early Seventies, apparently to be able to paint larger works than a fiberglass support would permit. This preoccupation with large scale also separates Davis from his West coast contemporaries, who were more often involved with a jewel-like preciousness or with installation pieces that considered the altered environment the work of art.

Davis’s commitment to maintaining the autonomy of painting distinct from its environment sets him apart from the California aesthetic, linking him more closely with the concept of painting as a larger than life, non-objective immaterial experience that the New York School aimed at. The tension between an emphasis on specific materials and intrinsic color (the pigment is literally in the plastic) and the attraction to “unreal” illusions of infinite spatial projections, suggesting an extraterrestrial infinity where the projected perspectives could converge only light years from the present, accounts for the mysterious and provocative tension of Davis’s fiberglass paintings.

Unlike many leading Southern California artists (Davis moved from San Francisco to LA in 1964), Davis admired and understood New York School painters, especially Clyfford Still, who briefly taught at the San Francisco Art Institute, [prior to the time during] which Davis attended. Most of his contemporaries could be found at Chouinard, the Disney School predecessor of Cal Arts. In Davis’s 1968-69 paintings, there is an obvious attempt to incorporate elements of Pollock’s spontaneous process of dripping, which solidifies liquid splattered pigment, and Still’s interlocking jagged planes of paint. What is deliberately missing is the tactility of encrusted surfaces, of malerisch brushstrokes and the textures of the loaded brush on top of the support. To make the “painterly” style new, to give it a fresh interpretation, Davis evolved a highly original technique based on the local fiberglass technology used to give glossy streamlined surfaces to cars, boats and surfboards. This is certainly not what Mondrian meant when he spoke of “plastic and pure plastic art,” but Mondrian’s identification of the picture plane with the surface, in rejection of illusionistic recession, must be seen as part of Davis’s impulse to create an entirely different set of illusions.

Reaching far back into art history, Davis combined the geometric volumes and linear perspective of the Renaissance with the assertive literalness of eccentrically shaped paintings. The result is a series of powerful hallucinatory contradictions: in the twelve-sided polygons of 1968-1969, we seem to be able to see inside the object. In paintings like Wedge, Lemon Yellow and Zodiac, “hollow” centers suggest the hurtling discs of a divine game of Frisbee played by the Gods of endless summers. The contradiction between weightiness (we know these be heavy objects) and the suggestion of lightness adds another piquant touch of irony and contradiction.

Because of the newness of their technique and materials and the striking physical presence of these paintings, their play between the absolute materiality of literal objects and the immateriality of deep spatial illusions constantly contradicting flatness was so startling, Davis’s considerable originality and sophistication as a colorist was rarely mentioned, largely overlooked and deserves more careful analysis. In retrospect, these works continue to look as fresh as the day they were made, which is more than can be said about most of the art of the period. They continue to intrigue the spectator not as novelty, but as a successful attempt to keep abstract art alive in an age where it seems superannuated. Ronald Davis’s Dodecagons remain an unforgettable and still valid high water mark in the recent history of modern painting.