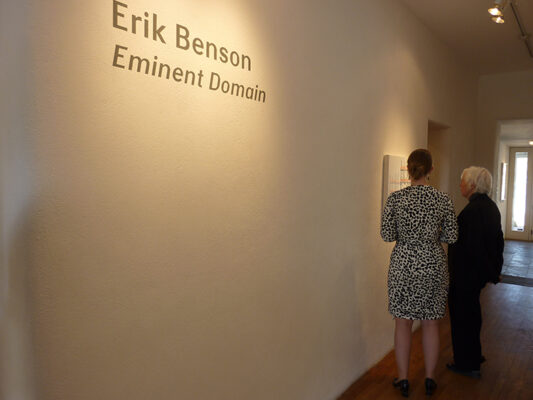 Erik Benson might qualify as a sculptor as much as a painter.  His process is one of building a painting in collaged layers of acrylic paint, much as a sculptor might build a bas-relief.  The resulting works will show at Eight Modern gallery on Delgado Street in an exhibition called “Eminent Domain,” opening today and running through June 4.

Benson’s contemporary landscape paintings “are simultaneously dystopian and romantic, exhibiting a discerning intelligence and graphic punch,” gallery registrar Meghan Ferguson writes.  “He works with acrylic paint, which he spreads in thin layers on a glass table to dry before using an X-Acto knife to cut it into shapes.  Benson peels off these decal-like pieces and collages them into the picture, building up the surface of the canvas into a low relief in a process that mirrors the constructed nature of the buildings and urban sites that he depicts.”  And the whole process began with an allergy.

“I was 24 years old and in grad school when I developed a rash and began to be very sick,” Benson told the “Journal.”  The allergist told the young artist he was allergic to oil paint, the very tool of his trade.  It hadn’t happened overnight, the doctor explained—Benson’s body had just reached its capacity for absorbing the toxicity.

“I was really unhappy and angry,” he said.  “I hated acrylic paint, and here I was being told to switch to acrylics.  I was trying desperately to work with acrylic like I did with oil and it wasn’t working at all.”  He had his studio swathed in plastic to catch the drips and dribbles of paint and Benson noticed that the various drips and dribbles would peel off the plastic.  He began experimenting with pouring the acrylic paint onto a sheet of glass and then cutting the paint into thin slices to create paintings on prepared fiberboard or canvas.  “It was one of those dumb accidents that became something bigger,” he said.

The resulting paintings a of urban ‘scapes, complete with architectural representations focused by delicate tree branches and urban details like flags and banners, have created increasing attention in the art world.  He was selected for a New York Foundation for the Arts fellowship and has an upcoming residency scheduled at the Bemis Center for Contemporary Arts.  He has exhibited at, among other venues, Galerie Schuster (Frankfurt), Finesilver Gallery, Houston and San Antonio, Rare Gallery, N.Y.C., Angles Gallery, Santa Monica and Artspace, San Antonio.  His work has been written about in the New York Times, The New Yorker, The Los Angeles Times, Art in America and ArtNews.  “I am interested in the mimetic [imitative] relationship between architectural subjects in the paintings and the process in which they are produced,”  Benson says.  “I’m interested I how this construction process allows in a painting vocabulary an exploration of unexamined things.”

His painting “Condo #1” depicts a colorless winter sky and a tree dropping the last of its leaves in front of a concrete and glass apartment tower with a kaleidoscopic array of windows.  The dramatic composition, flattened picture space, and almost wabi-sabi aesthetic are reminiscent of Japanese woodblock prints, Ferguson noted.

The New Yorker described Benson’s style as one “in which old-fashioned color-field abstraction merges with a dystopic, Pop-ish interest in the juny emptiness of highway on-ramps, strip malls and corporate offices…His layered acrylic canvases [are] works with a jigsawlike density, a gloomy/garish palette, and a keen sense of line.  The compositions manage to express humor, loathing and curiosity all at once.”

Benson stressed that his paintings are informed by architecture and landscape found in the everyday world.  “I build my paintings using a cut-and-paste collage method to create the forms and structures in my work.  I’m interested in how this construction process allows in a painting vocabulary an exploration of unexamined things,” he said in an artist’s statement.

Benson, 38, who was born in Detroit and has described his upbringing as solidly Midwestern and middle-class.  His parents, he has said, were skeptical that he could earn a living as an artist.  He earned a bachelor’s in fine arts degree from the Minneapolis College of Art and Design and a master’s degree from the Rhode Island School of Design in 2001.  He lives and works in Brooklyn, N.Y.  For many years, Benson supplemented his income by working as an art handler, one who crates and ships or moves art for galleries and museums.  But it is very hard to work full-time and be an artist, he said.  Sooner or later, Benson said, every artist has to decide to “eat Ramen noodles and just go for it full time.” For him, the time of Ramen noodles paid off.

“I just turned down a big museum job for the first time in five years,” he said.  “Told them ‘Nope, I need to paint and I can afford to.’  It felt great.  Really cool.  You have to find out what’s important to you.”  Benson said with humility that luck can’t be discounted in an art career, although “sometimes, the harder you work, the luckier you get.”  Placing work in a New York Armory show was a piece of luck for him, he said, and it resulted in exhibits in Santa Fe (at Eight Modern), Spain and another New York gallery.

His latest experiments have to do with watercolor, which he said, have allowed him to “add some airiness” to his paintings.  That enhances the poetic quality critics have noticed in his work.  “Despite the desolation of the scenes he portrays, Benson’s paintings retain a remarkable vitality, energized both by his dedicated, thoughtful process and the inherent familiarity of his subject matter,” Ferguson said.  “Erik Benson finds truth and beauty in the urban blight that is often left overlooked and unexamined.”