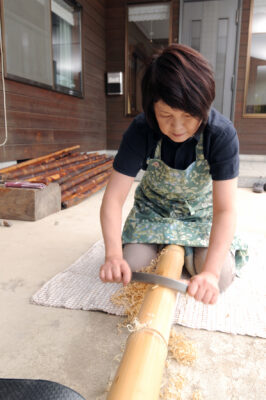 A basket artist ‘on the leading edge’

The Japanese artist Isohi Setsuko used to hate her given name because it sounded old-fashioned.

“I believe it was my destiny to become a bamboo artist,” Setsuko stated.

Santa Fe’s TAI Modern will showcase that magic with fiber and fingers in a solo exhibition of Setsuko’s work through Aug. 28. The artist’s work appeared in a TAI show of women basket-makers in 2010; the current show marks her first solo exhibition here.

Gallery owner Margo Thoma discovered Setsuko’s work through the Japanese Traditional Craft Arts Exhibition. At the time Setusko started, it was unusual for a woman to pursue the art.

“She was only the third female basket artist to become a full member of the artistic group she’s a part of,” Thoma said. “She’s on the leading edge of this.” The artist buys her bamboo from a wholesaler, but the rest of the process is hers alone. It all began 25 years ago when she decided to take a class on bamboo weaving offered near her home in Otawara City. What began as a hobby grew into a passion. Setsuko advanced rapidly, studying her craft with fellow bamboo artists who were considered national treasures.

“Basket weaving has aways been around for utilitarian purposes,” Thoma said. “As an art form, it developed with the tea ceremony and flower arranging. At the time, there was this intense admiration of Chinese culture.”

The Japanese imported these baskets and began weaving their own.

“It wasn’t until the 19th century that the basket makers made this transition from artisan to artists,” Thoma added.

While the Chinese versions were ornate, their Japanese counterparts boasted clean lines with precision weaving.

“The Japanese aesthetic is that it showed off the natural beauty of the bamboo,” Thoma said, “instead of subsuming the material to the form.”

Setsuko is known as a “precisionist” who favors vibrant reds.

“She’s never been late finishing a basket for an exhibit,” Thoma said. “She said she never turned in a school assignment late. She always imagines the piece in her mind before she starts.”

Setsuko learned much from her male predecessors. Her current work reveals the arrow pattern techniques she learned from Living National Treasure Hayakawa-sensei and the radial splitting of bamboo technique she learned from bamboo master Katsushiro-sensei.

Other works show the subtle sophistication of her quadruple layered hexagonal plaiting. She layers each of the four layers tinted darker than the other, creating a sense of depth.

Athough the weaving is pristine, it is never mechanical.

Her “work is very warm and it breathes,” Thoma added.

Setsuko starts by scraping the waxy layer of the bamboo’s skin. Then she repeatedly splits and cuts it to form either constructed or woven baskets. Many of her works combine both techniques.

“The rim is bent into a V shape,” Thoma said. A tray base may contain four layers of hexagonal, plaited bamboo.

“The color is probably the first thing that caught my eye,” Thoma said of Setsuko’s crimson dyes.

In 2010, Setuko won Best of Show at the Japanese Traditional Craft Arts Exhibition, one of just three bamboo artists to win the prestigious title across its 62-year history.