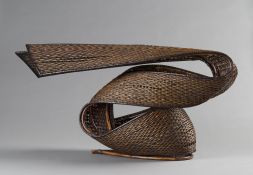 Bamboo: A trajectory in basketry and sculpture

The Craft & Folk Art Museum (CAFAM) in Los Angeles presents Bamboo, an exhibition of 30 historical and contemporary works that explore the trajectory of Japanese bamboo basketry and sculpture. Drawn mostly from the Los Angeles-based Cotsen Collection, this exhibition reflects the evolution of the art form—from Chinese-style tea ceremony baskets to striking contemporary sculptures. A large-scale, site-specific installation by Japan-based artist Akio Hizume evokes the possibilities of bamboo as an artistic material. The exhibition will open on May 27 and run through September 9, 2018.

Fine bamboo basketry gained a foothold in Japanese culture during Japan’s medieval period (1185-1573 CE) as the tea ceremony was adapted from China and became an important part of Japanese lifestyle. The demand for fine Chinese style bamboo tea and flower arranging vessels resulted in numerous talented artist and apprentices devoted to the artform. Though earlier artists were emulating Chinese forms, by the mid-19th century Japanese bamboo artists were making artist-signed baskets with a distinctly Japanese aesthetic that embraced the imperfect and organic simplicity known as wabi-sabi. From the 20th century to present day, bamboo basketry became less functional and more radically sculptural.

Bamboo is an expressive material that is challenging to work with, involving complex weaving, plaited, dyeing, bending, and knotting. Though early artists learned through apprenticeship and were part of artist lineages, present-day artists are often self-taught and begin learning through university programs,. Included in the exhibition or two works by Shono Shounsai (1904-1974), the first bamboo artist named a Living National Treasure (1967) by the Japanese government. Artist Yamaguchi Ryuun, noted for his voluminous bamboo forms, apprenticed with Shounnsai and is active in teaching a new generation of bamboo artists. Though the art mostly passed down to male practitioners, there are a small number of women artists working today. These include Kajiwara Aya and Tanabe Mitsuko, who both studied the art form after marrying into families of bamboo artists.

Architect and artist Akio Hizume’s Fibonacci Tunnel (2018) is an architectural installation that shows new directions in bamboo artistry. Made entirely of bamboo poles and stakes, the large tunnel incorporates the geometric principles of the golden ratio and Fibonacci sequence and is meant for visitors to walk through. Hizume will lead a workshop at the museum during the course of the exhibition.

As the importance of the tea ceremony declined in Japan during the last century, bamboo basketry was no longer a sustainable enterprise for artists. Collector Lloyd Cotsen saw decline in the artistic legacy and created a competition for young bamboo artist that took place from 2000 to 2007. The competition helped revive contemporary bamboo basketry and has encouraged a new generation of artists to expand and innovate the artform.

Bamboo is organized by CAFAM exhibitions curator Holly Jerger and Lyssa Stapleton, curator of the Cotsen Collection, at the Craft & Folk Art Museum.